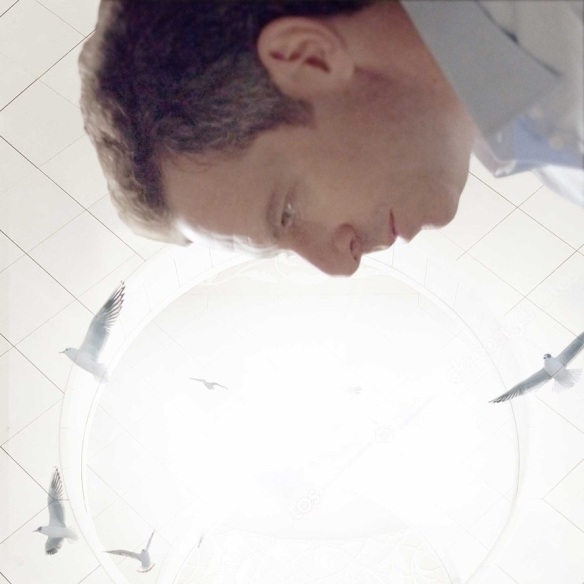 Sam Harris is looking for peace.

It is a given that it is a bad idea to discuss politics and religion if you want things to be sociable. Harris, a neuroscientist, is an atheist who has become symbolic of the New Atheist movement. Nawaz is a former radical Islamist who after being rescued from an Egyptian jail by Amnesty International has become an outspoken advocate for religious reform within Islam. Initially when they met, a discussion over the possibility of reform within Islam led to a rift between the two men.

Eventually, they decided to talk things out and discovered that they were more like than unalike. While they both have fundamental differences in philosophy, both agree that Islam needs reform, and that the way to do it properly is not through violence but through conversation. The two men had just such a conversation (which fortunately was recorded with excerpts from it played here) which led to them co-authoring a book whose name this documentary has taken as a title and whose subject matter has inspired this film.

Both men are articulate and intelligent; listening to them talk is absolutely fascinating. They are also passionate believers in their ideas, with Harris in particular suggesting a willingness to have his mind changed. Watching this movie is like being privy to a conversation between two intellectual equals who not only have differing points of view, they are both willing to admit the points of view that they share as well. At times the movie gets a little bit talky which might scare some people off (if the subject matter doesn’t to begin with) but I found the movie never got dull. Your opinion may differ on that score.

While the directors use some interesting visual metaphors to what’s happening (like using tightrope walkers to illustrate the difficulty both men faced when they re-convened in 2014) they mostly stick to interview-style tactics to discuss the backgrounds of the two main subjects, particularly when it comes to Nawaz whose background in England going from a fairly happy high school student to a radical Muslim is compelling. He would join the radical Hizb Ut-Tahir group and become an important recruiter to their cause. After 9-11 (he was in Cairo recruiting at the time) he was arrested by the Egyptian police and tortured. It was only through the intervention of Amnesty International that he was released; the fact that it was Westerners who saw to his rescue led to his transformation from radical Islamist to advocate for reform.

The questions raised by the movie are worthy ones and to be honest these are questions we are all going to need to grapple with. The last third of the film both men take aim at liberals who have a tendency to overreact to criticism of Islam by immediately playing the bigotry card. The infamous Real Time With Bill Maher show on which actor Ben Affleck blew a gasket when host Maher and guest Harris referred to Islam as “the mother lode of bad ideas.” He said that the sentiment was “gross and racist,” and at the time I agreed with him.

Watching this though I see what Harris and Maher were trying to get across a little bit more clearly. They are absolutely correct that liberals are becoming more and more entrenched and intolerant in their beliefs that true liberals march in lockstep when it comes to issues of cultural appropriation, sexual politics and other liberal sacred cows. Criticism of bad ideas is at the heart of liberalism and if we can’t do that without someone yelling “cultural insensitivity,” then we have failed. However, words do matter and I can understand why Affleck blew a fuse – going back and watching the clip over again (it’s on HBO Go) the language both Harris and Maher used was inflammatory. That becomes more of an issue when Nawaz argues that strict interpretation of what the Quran says may not necessarily reflect what the intent was of the writer to get across; the language has changed considerably in the interim, as well as the context.

This is fascinating stuff although some may find it dull and overly intellectual. For my part, I think that film should occasionally give our brains an opportunity to be exercised and tackling controversial but relevant questions about explosive subjects is in general a good thing. This is a dynamic if occasionally dry movie that is unafraid to tackle a subject most of us don’t care to think about – but we really should.

REASONS TO GO: The viewer is forced to reexamine their beliefs. This is more of an intellectual film than an emotional one. There are some interesting visual metaphors.
REASONS TO STAY: The film may be a bit too talky for some.
FAMILY VALUES: The thematic content is not suitable for children. There is also some profanity including racial epithets.
TRIVIAL PURSUIT: Harris and Nawaz met at a dinner following a debate in which Nawaz felt he had his rear handed to him; Harris, admittedly tipsy, asked questions of the obviously hurt Nawaz that led to a non-violent standoff. Four years later, Harris reached out to Nawaz and had a lengthy phone conversation; both men found to their surprise that they had more common ground than they thought.
BEYOND THE THEATERS: Amazon, iTunes, Microsoft, Vudu
CRITICAL MASS: As of 12/19/18: Rotten Tomatoes: No score yet. Metacritic: No score yet.
COMPARISON SHOPPING: The Thinking Atheist
FINAL RATING: 8/10
NEXT: Ben is Back

In many ways war has become obsolete. A world war seems pretty unthinkable when so many nations have nuclear capability. In the 21st century rather than waging war on a battlefield, it seems far more effective to wage economic war electronically.

Jack Ryan (Pine) is studying for his doctorate in economics when the World Trade Center comes down. He is moved to join the Marine Corps and is advancing in rank when his helicopter is shot down. He is badly injured and must learn how to walk again. He catches the eye of a pretty physical therapist named Cathy (Knightley) who is preparing to be an eye surgeon and doing a student rotation in PT at Walter Reed. He also catches the eye of Thomas Harper (Costner), head of a CIA team whose mission is to prevent terrorist attacks. Harper recruits Ryan to keep an eye on terrorist money laundering on Wall Street, helping him complete his doctorate and placing him at a high-profile Wall Street firm.

That proves dividends when Jack notices certain accounts at a Russian firm have been hidden from his company. That seems extremely suspicious to Jack so he goes to Moscow to run an audit where he meets billionaire Viktor Cherevin (Branagh) who sets off all of Jack’s up-to-something sensors. Things are further complicated when comely Cathy, now Jack’s girlfriend and completely unaware of his double life as a CIA analyst, impulsively travels to Moscow and becomes caught in the middle of what could be a crippling economic blow to the United States.

As the first Ryan film not to be directly sourced from an existing Tom Clancy novel, the movie rewrites the origins of the bestselling character and updates it somewhat (the first Ryan film appeared in 1990, eleven years before 9-11). Pine becomes the fourth actor to portray Ryan in five films which is perhaps one of the reasons this franchise, while profitable, has never really taken off like Bond for example, which seems to survive the changing of actors much better than Jack Ryan does. Also, the Bond films have surmounted the end of the Cold War much more effectively than the Jack Ryan movies which really need a Soviet presence to work properly.

This is perhaps the least visually impressive of the Ryan movies but yet still packs a decent visual punch. We don’t really get to see the high-tech CIA headquarters much (read: at all) and most of the really impressive visual stuff takes place at the headquarters of the Russian financial corporation that Ryan is auditing.

The cast is fairly impressive, with veteran Costner coming off with the win as the laconic CIA officer who, when asked by Jack if he and Cathy can have a moment to discuss their relationship situation after she discovers his double life, says flatly “No. This is geopolitics, not couples therapy.” It’s a highlight in a movie that lacks light moments.

Pine plays Ryan as a literal analyst; he always seems to be thinking ten steps ahead of things. Often this leaves him feeling cold and unapproachable to the audience. I would have liked to have seen more humanity from Ryan, who as portrayed by Harrison Ford, Alec Baldwin and Ben Affleck, always seemed to manage some humanity while still coming off as the smartest guy in the room. Pine gets the second part right.

Branagh, once the heir to Sir Laurence Olivier’s mantle in terms of being the finest actor and director of Shakespeare onscreen, has of late been trying his hand at action movies, having previously directed Thor before taking this one on. He has a fine visual sense as a director and uses that to his advantage here. As for action sequences, there aren’t really a lot of them here – a motorcycle chase near the end of the film, a fight with an assassin in a hotel room and a very suspenseful sequence in which Jack is trying to retrieve data from the computer of Cherevin before getting caught. That contributed I think to what I felt as an overall lack of energy in the movie; it didn’t seem to flow the way I would like an action movie to flow.

As the bad guy, Branagh is very understated (as opposed to the villain he played in The Wild, Wild West in which much scenery was chewed) and makes a nice foil for Ryan, full of quiet menace but with real rage boiling underneath the surface. If the movie were a tiny bit better, he’d have been a classic espionage villain but even as it is he is still a superior villain. I wonder what Harrison Ford’s Jack Ryan (still the best of the bunch) would have done with Branagh’s Cherevin.

REASONS TO STAY: The movie has a curious lack of energy.

TRIVIAL PURSUIT: Costner was originally cast as Jack Ryan in the very first movie in the franchise, The Hunt for Red October but wound up turning it down to make Dances With Wolves instead.

COMPARISON SHOPPING: The Sum of All Fears