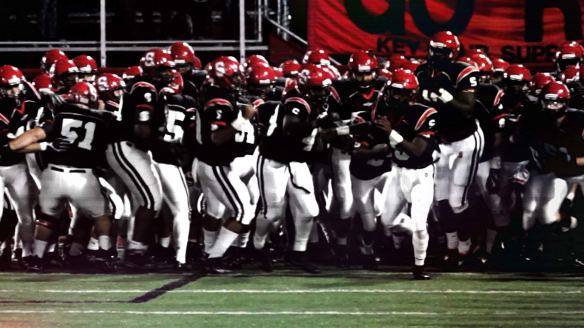 We revere our sons but marginalize our daughters.

Rape culture has become an aspect of the news cycle in recent years, particularly in light of the #MeToo movement in which women on social media who have experienced some sort of sexual crime from harassment to rape identified themselves as survivors. We have seen it in the light, inconsequential sentences given to those convicted of rape. We have seen it in the way those who report it are traumatized not only by the crime but by how they are treated afterwards. Boys will be boys, and boys rape or at least so the line of thinking goes.

Steubenville is a small town in the Rust Belt, a largely working-class town. There are not a lot of opportunities in Steubenville; most people have dead end jobs in the service industry as the manufacturing jobs that were once the town’s lifeblood are mainly gone. It’s most famous resident was the legendary Rat Pack crooner Dean Martin; after that, the town’s pride and joy is its high school football team which has won ten Ohio State championships since 1925 and as recently as 2017. The town supports its football team with a fervor verging on the religious.

In August 2012, a preseason party in Steubenville ended up with a student from another school (identified in the film only as Jane Doe, although the girl involved was identified by name on Fox News and other outlets) was raped by several members of the Steubenville football team. The girl had been drinking a lot to the point where she was passed out or nearly so. Two of the members of that team – Ma’lik Richmond and Trent Mays – transported her to another party and then to a third. Photos were taken. Video was taken. Tweets were made.

The girl was humiliated by the social media attention, amounting to a second rape. She decided to press charges even though her memory of the evening was very fuzzy. Detective J.P. Rigaud was assigned the case and he began the process of interviewing people at the party that she last remembered being at – the first one.

In the meantime, crime blogger Alexandria Goddard – who grew up in Steubenville although she was then based in Columbus – saw an item about two football players being charged in the rape of a teenage girl and thought that there had to be more to it than that. She began digging, looking up tweets and Facebook posts, even managing to search the archives of Twitter to see deleted tweets.

What she found was shocking – the utter lack of empathy, the objectification, the misogyny displayed by the boys (and even to a certain extent the girls of Steubenville High who shrugged and said “She should never have gone with those boys”) who joked about the event “Song of the night: Nirvana’s ‘Rape Me’.” “Holy shit! Something crazy’s going down, bro” and “She got raped harder than that black cop raped Marcellus Wallace.”

The town reacted with a mixture of shock – some shocked that the boys would behave as they did, others shocked that the blogger would treat their football stars as guilty before they’d even gone on trial.” Goddard was reviled and even feared for her safety as supporters of the football team called her all sorts of vile names and wished all sorts of disgusting things to be done to her. Eventually the Cleveland Plain Dealer picked up the story, then the New York Times. Finally, the hacktivist group Anonymous picked up on Jane Doe’s story and organized protests in Steubenville, targeting (somewhat unfairly) the police response, the town’s reaction, the lack of internal punishment for the players (neither Mays nor Richmond were kicked off the team despite the hard line taken by Coach Reno Saccoccia on underage drinking on his team.

Schwartzman presents the details dispassionately and chronologically. She is obviously outraged by what happened and she uses the film as a means of illustrating what rape culture means in a small American Midwestern town, supposedly the bastion of American values. One reporter mused “In protecting our sons are we putting our daughters at risk?” The short answer: yes.

The issue I have is that this didn’t happen in a vacuum. Boys aren’t born rapists; we see only a little bit of the atmosphere that produced Mays and Richmond as well as the rest of the football team who thought this girl’s suffering was a big joke. While Richmond breaks down when apologizing to Jane Doe and her family in court, we never get a sense if Mays ever felt remorse or if the rest of the team felt any. Did anybody actually learn anything?

Also, these kids are all working class kids. I wonder if this case would have been treated the same way if the defendants came from a more privileged background. We’ve seen high profile cases in which wealthy white young men got off virtually consequence free for their actions. Some would say that relatively speaking, Mays and Richmond did the same.

Maybe that wasn’t Schwartzman’s function as a documentarian to find all the answers. The question is certainly raised in my mind at least so in that sense the documentary is a success, but it is a very hard film to watch emotionally and especially for those affected directly or (in my case) indirectly by rape, misogyny and sexual objectification. Goddard – the heroine of this story and a true inspiration – wrestles with the thought that she may be causing Jane Doe harm by forcing her to endlessly relive the events of that evening. Goddard comes off as a tough cookie but she dissolves into tears thinking about it.

Rape culture is a fact and we are living in it. Attitudes have to change, that much is certain. Women don’t deserve to be raped, no matter how much they drink, what they might choose to wear or where they choose to be. Men are not entitled to have sex with a woman who doesn’t want to or can’t give consent. Maybe in some way this movie – which will be playing the Florida Film Festival in a few weeks – will help move that change along.

REASONS TO SEE: The facts are well-presented. This may be the most in-your-face depiction of rape culture ever captured.
REASONS TO AVOID: This is a very hard movie to watch even if you haven’t directly been a survivor of sexual violence but particularly if you have been.
FAMILY VALUES: There is some sexual content and frank discussions about rape.
TRIVIAL PURSUIT: The documentary was selected to kick off the 2019 season of the acclaimed PBS documentary film series POV in June.
CRITICAL MASS: As of 3/22/19: Rotten Tomatoes: 100% positive reviews: Metacritic: No score yet
COMPARISON SHOPPING: The Accused
FINAL RATING: 7.5/10
NEXT: Out of Blue