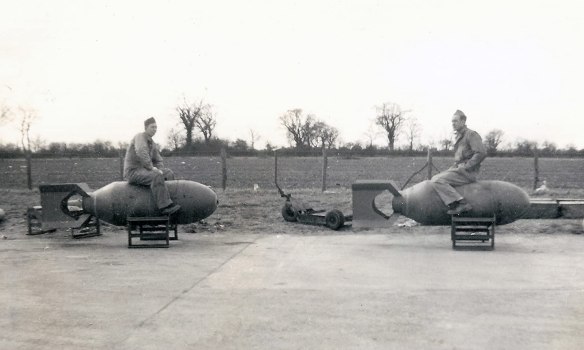 How we learned to stop worrying and love the bomb.

They are called the Greatest Generation for a reason. They sacrificed, putting their lives and their comfort on the line to fight true evil. And they triumphed.

Now, they are old and slowly fading away and their memories of the Second World War with them. Daytime Emmy Award nominee Michael Sellers’ grandfather fought with the 93rd Bomber Group of the 8th Air Force, mainly based at Hardwick Air Base near Norwich in East Anglia, Great Britain. What had once been an air base is now mainly a potato farm. The few buildings that remain are in surprisingly good shape, although they too are beginning to crumble.

Those who live nearby, as well as the children and grandchildren of those who flew nearly 400 missions from there (more than any other group in the 8th Air Force) had formed an association to foster reunions and trips to visit their old haunts in Norwich and Hardwick. Local townspeople feel a real sense of gratitude to the group, who helped turn the tide of the war. They have done what they can to preserve what is left and put together a museum dedicated to the 93rd.

At one of those reunions, Sellers got the idea to make a documentary but rather than capture the stories of those who actually served, he concentrates on three children of those who served there – George Jung, whose father (a navigator) died when he was young, so he never really got to hear about what his father experienced in the war; Gail Mailloux, whose mother and father (who have since passed away) met at Hardwick and got married there, and finally John Marx, whose Uncle had died in a plane crash on the air base. So little information had made it to the family about what happened that Marx has spent years trying to piece things together.

Utilizing archival footage, still photographs and interviews with the veterans, their descendants as well as those who live in the area, to make a mostly fascinating documentary that focuses not so much on the big picture of the war, but on a particular unit involved with it. This really hasn’t been done before except for maybe with the Tuskegee Airmen, but it’s a good idea and should be repeated with other units that served in the War.

The only real quibble I have is that at times the narrative is a bit disjointed and done in kind of a scattershot fashion, jumping from story to story and into different time periods of the war. There is some context so you have an idea of the major events that the group was involved with but that is a relatively minor quibble. For history buffs, particularly those enamored of military history, this is solid gold.

REASONS TO SEE: Interesting stories from the vets, as well as some wonderful archival footage.
REASONS TO AVOID: A little bit disjointed.
FAMILY VALUES: There is some brief profanity.
TRIVIAL PURSUIT: Produced with the aid of the 93rd Bombardment Group Association, which puts together the reunions and trips back to Hardwick for surviving veterans, promotes keeping the history of the Bomb Group alive, and gives the veterans and their families a means to keep in touch with one another.
BEYOND THE THEATERS: Amazon, AppleTV, Google Play, Microsoft, Vimeo, Vudu, YouTube
CRITICAL MASS: As of 6/8/20: Rotten Tomatoes: No score yet, Metacritic: No score yet
COMPARISON SHOPPING: Memphis Belle: The Story of a Flying Fortress
FINAL RATING: 6.5/10
NEXT: Miss Bala (2019)