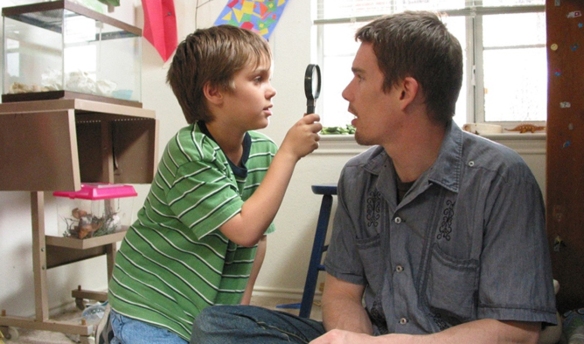 Life is an ongoing investigation.

Seinfeld was famously a sitcom about nothing. Here we have a movie, filmed over a 12 year span, in which nothing much happens. Nothing much, maybe, except life.

That is what this movie is all about. Richard Linklater, one of the more respected directors in the indie ranks who has such seminal films as Dazed and Confused and Slacker to his credit as well as the ambitious Before trilogy, took the time to film this movie with the same core cast of actors over a 12 year period. What he ended up doing is filming a series of short films which he later stitched together into a full-fledged feature film as we watch the cast grow up and age before our very eyes.

Mason (Coltrane) lives with his mom (Arquette) who is divorced from his dreamer of a father (Hawke) and his sister Samantha (Linklater) with whom he bickers constantly. She’s got a bit of the princess to her and she knows how to stomp her feet and declare her position without equivocation.

They live in various locales in Texas as mom takes on a series of boyfriends and husbands with varying degrees of success. She also goes back to school and gets her degree, enabling her to teach at a local community college. Dad in the meantime returns back to Texas from Alaska and means to take on a more active role in the lives of his kids. At first he’s just another, larger-sized kid along with them, but as time goes by he starts to change and becomes more the father he should have been all along.

Critics have been falling all over each other to praise this movie as you can tell from the scores on Rotten Tomatoes and Metacritic, so much so that I can’t help wonder when the inevitable backlash is going to hit. All I can say is not now and not here. This is a magnificent film, one that will engender discussion for a very long time; certainly when you leave the theater you’ll be talking about it.

This was always a project that was going to need a little bit of luck. Getting the parents of the child actors to agree to taking a couple of weeks each year to film for 12 years is quite a commitment to ask for, even from the professionals. What if the kid actors turned out to be terrible? What if one of them decided they didn’t want to do this anymore – and in fact one did. Surprisingly, it was the director’s daughter who asked her daddy to kill her off in the movie. Thankfully, Linklater had enough vision to insist his little girl see it through – and eventually she came back on board.

The point is, there were a lot of ways that this project could have been torpedoed but in every sense of the word this movie was charmed. For one thing, who would have guessed that Coltrane would turn out to be a charismatic young actor? Linklater may well have suspected but there really was no way to know for sure when a kid is eight years old how he’s going to react to things when he’s eighteen.

Nonetheless, Coltrane gives an unexpectedly terrific performance. Sure there are times when as a young boy his acting is a bit forced by as the movie continues you see him grow more and more confident in his ability. By the time Mason heads off to college, there is a maturity to the boy and the performance that simply put gives the movie a grand shot in the arm. I don’t know what Coltrane’s future plans are but he certainly has the presence and the talent to make a go of it in the motion picture industry.

Arquette, who filmed concurrently to her work in the TV show The Medium for a good portion of the movie, has a complicated role. In many ways, her character is the least defined; while Hawke’s dad has a defined journey from flamboyant and immature daddy wannabe to responsible and surprisingly wise father, her character is always the most responsible one of the two. Her issues stem from her very poor choices in men, some with devastating consequences to her family. She’s a very bright, attractive woman but by movie’s end she’s alone. One wonders if her character deserved that fate.

We watch Mason and Samantha grow up before our very eyes while their parents grow older and wiser. One of the complaints that I’ve heard is that there are stretches where nothing happens, but those who make that complaint miss the point. Life happens, and sometimes life happens subtly. It isn’t just the big watershed moments in our lives that make us what we are – it’s the little things as well, sometimes as small as bowling without bumpers.

The late Gene Siskel was a huge fan of slice of life films and undoubtedly this is the kind of film he would have championed. There is no slice of life movie that takes such a slice out of life and makes it seamless and organic. We don’t watch this movie so much as live it; throughout we are reminded of the events and situations in our own lives either as children growing up or as parents raising children, or even both. Those of a certain generation will find nostalgia in Harry Potter book release parties, a spot-on soundtrack, Ninetendos and campaigning for Obama. Others will recognize the kinds of challenges they faced growing up in the era, or raising kids in  the era.

Either way, this film will move you and take you places that while you may have already been there, will give you a fresh perspective on the matter. We all react to movies based on what we take into them from our own experiences, but this is one movie that most people are going to find value in, even in its quietest moments.

REASONS TO GO: Incredibly authentic. Basically appeals to kids that age. A primer for what to expect when raising kids.

FAMILY VALUES:  A fair amount of swearing, some sexual references and teen sex, drinking and drug use.

TRIVIAL PURSUIT: In the film, Morgan and Samantha’s dad take them to an Astros game against the Brewers and tells everyone that the Astros won on a three-run homer by Jason Lane in the bottom of the ninth. In reality the game, filmed on August 18, 2005 was won by the Brewers and Lane’s homer was a solo shot in the second inning.

NEXT: Get On Up