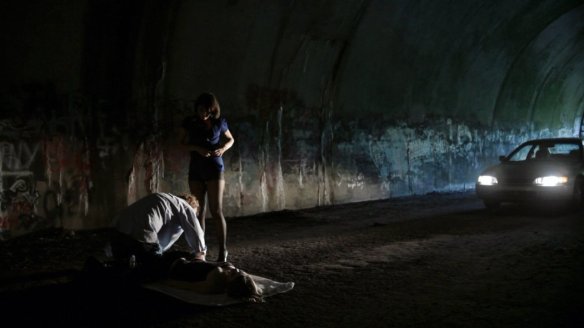 Mitchell Haven (Runyan) is a moviemaker working on a film in North Carolina about a crime scandal. He has hired virtual unknown actress Lauren Graham (Sossamon) to play the role of Velma Duran (Sossamon), daughter of a Cuban national involved in an embezzling scheme with politician Rafe Taschen, played by actor Cary Stewart (De Young).

But art may well be imitating art as the director begins to fall for his leading lady, who may know more about the original crime than she lets on. And as flashbacks of the original crime tell us, the lines between movie and life are starting to blur significantly.

There is a definite noir feel here almost to the point of parody. Hellman is well-known for more anti-establishment sorts of films that tend to break rules and take chances. This is as mainstream a film as he’s directed (at least that I’ve seen), Silent Night Deadly Night 3 notwithstanding – it was subversive for its time as I recall (I haven’t seen it in almost 20 years).

I have to admit that most of my impression of Sossamon has been fairly rote, but she really shines here and proves that she is well-suited to a mysterious femme fatale role. She tends to get more sexpot roles and while she does well with those, the added air of mystery and potential mayhem really suits her. Not that Shannyn Sossamon is planning to murder anyone, mind you. She just plays someone like that on TV….or, in this movie.

One of the big problems here is that Hellman jumps back and forth from the movie to the crime (using the same actors playing the actors who committed the crime) and very often you are confused as to what you are watching which I suspect is deliberate on Hellman’s part. Fiction and reality collide and merge until it is impossible to tell which is which and perhaps that’s the whole point. It didn’t work for me however, possibly because I was being overly analytical about it. Sometimes it’s best just to let things kind of happen and allow them to wash over you without overthinking them.

This is a bit intellectual as noir films go, and a bit noir as intellectual films go. It’s really neither six of one nor half a dozen of the other and curiously unsatisfying when all is said and done. This isn’t the movie I would have expected Hellman to mount a comeback on. Not that I want to see him rehash his old style but I would have hoped for something a little less pedantic than this.

WHY RENT THIS: Sossamon is at her very best.
WHY RENT SOMETHING ELSE: Often confusing, particularly as to timeline.
FAMILY VALUES: Foul language (though not a ton) and a brief scene of violence.
TRIVIAL PURSUIT: This was Hellman’s first feature film in 21 years.
NOTABLE HOME VIDEO EXTRAS: A Q&A from the Nashville Film Festival and on the Blu-Ray edition, an interview with Sossamon.
BOX OFFICE PERFORMANCE: $161,619 on a $5M production budget.
SITES TO SEE: Netflix (DVD Rental only), Amazon, iTunes, Vudu, Google Play, M-Go
COMPARISON SHOPPING: The Shameless
FINAL RATING: 5/10
NEXT: The Bank Job