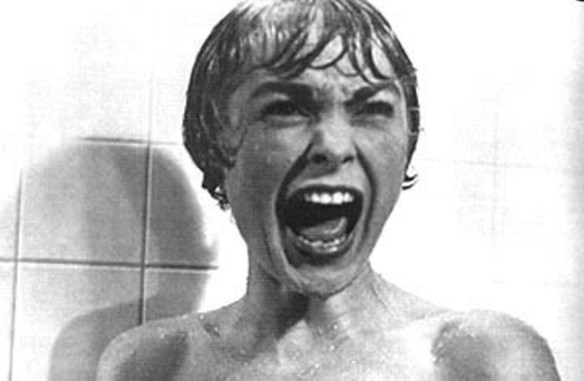 The scream that started it all.

Some movies transcend the genres they’re in. The Searchers is a Western that is greater than its genre. Saving Private Ryan is a war movie that sets the standard for its genre. Horror movies have a lot of films that are bigger than their genre. Arguably, the one that might make the most impact among mainstream film audiences is Alfred Hitchcock’s Psycho.

When it came out the year I was born movie audiences really hadn’t seen anything like it. Back then there were no ratings, just the Hays code that all movies had to adhere to. Psycho skirted those codes without violating them, a neat trick. It did it so well that many remember it as being more violent than it was and even remember the red hue of the blood despite it being filmed in black and white. It was a game changer and it set the stage for how the modern horror movie is made, for better and for worse.

Marion Crane (Leigh) is a secretary at a financial institution who is tired of being single. She is deeply in love with Sam Loomis (Gavin) but he lives in California, she lives in Arizona and he is barely able to make ends meet. There’s no way he could possibly take care of her.

After a lunch time rendezvous with her lover, she is given $40,000 of Tom Cassidy’s (Albertson) money to deposit. Instead, she snaps and drives off with it, hoping to run away to California and use her ill-gotten gains to start a new life with her man.

However, she is too tired to drive there all in one session, so she stops for the night at the off-the-beaten-path Bates Motel. There the innkeeper Norman Bates (Perkins) rents her a room and has a sweet but increasingly creepy conversation with her. Afterwards, she retires to her room for the night to wash the road off of her and get a good night’s sleep.

However things go horribly wrong and her sister Lila (Miles) hires a private investigator (Balsam) to check up on her baby sister. There is something going on at Bates Motel. Something terrible. Something deadly. It’s much like the Hotel California; you can check out any time you like but you can never leave.

Financed by Hitchcock himself and made at for what was even at the time a pittance, it remains Hitchcock’s classic horror movie. Now, he is the Master of Suspense – not the Master of Horror – and he is best known for films like Vertigo, North by Northwest and Rear Window but many people think this was his finest hour. It certainly is one of his most visceral films, even if by suggestion more than the actual showing of blood and carnage.

There is a scene in which a woman takes a shower that has become iconic. During the course of the scene she is attacked in the shower by what appears to be an old woman. The naked screaming woman tries to protect herself but is stabbed repeatedly in the shower and is mortally wounded. The sequence takes only 45 seconds but took a week to shoot and is as masterfully edited as any sequence in film history. It is sudden, shocking and completely unexpected. It turned horror conventions on their collective ears and paved the way for the opening sequence of Jaws among others. That it happens ten minutes into the movie completely changes the movie’s direction – and yet fits into the story seamlessly.

Based on a novel by Robert Bloch (who famously once said “I have the heart of a little boy; I keep it in a jar on my desk”) Hitchcock got the rights for a paltry nine thousand dollars and turned the story which was meant to be a kind of pulp horror story into a classic film.

Perkins entire career was defined by this role which he would reprise in future films, all of which were made after Hitchcock’s death. It would typecast the young, handsome actor for pretty much the rest of his life, but characteristically he didn’t resent being typecast in it and remembered the making of the film fondly up until his own death in 1992 (Central Florida movie fans may not be aware that he attended Rollins College at one time).

Leigh was also a presence in a brief but notable role. It is her performance that helped convince John Carpenter to cast her daughter Jamie Lee Curtis as Laurie Strode in Halloween. Talk about far-reaching influences, right? In any case, the Master of Suspense kept the tension up to maximum throughout the movie from the moment Marion Crane drives off with the cash.

Most people have seen Psycho on television or on home video. It is one of those movies that when seen on a big screen is even more remarkable. If it plays in an art house or revival theater anywhere near you, it is worth your while to seek it out, even if you’ve seen it before on television. It was meant to be seen on a big screen despite the intimacy of the setting. It has inspired a shot-by-shot remake by Gus van Sant and a hit television series on A&E. It remains for many the quintessential horror movie, one that even after half a century is still scary as hell.

WHY RENT THIS: Suspenseful and if you don’t know the twist, shocking. Career-defining performance by Perkins. Leigh brief but memorable. One of Hitchcock’s all-time greatest.
WHY RENT SOMETHING ELSE: While extreme for its day is pretty tame by modern standards.
FAMILY VALUES: Sexuality and violence, once again tame by today’s standards but shocking in 1960.
TRIVIAL PURSUIT: This was Hitchcock’s last film to be shot in black and white, and also his biggest box office success.
NOTABLE HOME VIDEO EXTRAS: The two-disc 2008 release as well as the 2010 Blu-Ray release includes newsreel footage of the movie’s premiere and the special rules regarding latecomers, two different versions of the notorious shower scene including one without music (the way Hitch intended it originally), an audio interview of Hitchcock by French director Francois Truffaut,  a discussion of Hitchcock’s legacy including interviews with modern filmmakers who owe their careers to the Master of Suspense, and a full-length episode from the Alfred Hitchcock Presents TV show.
BOX OFFICE PERFORMANCE: $32M on an $806,947 production budget.
SITES TO SEE: Netflix (DVD rental only), Amazon (buy/rent), Vudu (buy/rent),  iTunes (buy/rent), Flixster (buy/rent), Target Ticket (Purchase only)
COMPARISON SHOPPING: Hitchcock
FINAL RATING: 10/10
NEXT: Fury