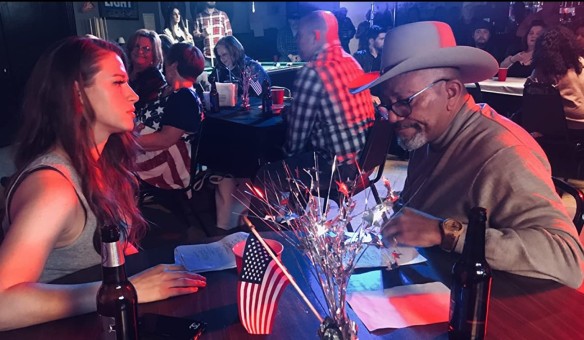 As American as appletinis.

It’s a familiar story as America continues to deal with the longest armed conflict in its history; soldiers are trained to go out into the field to defend….well, our way of life ostensibly, although I think most soldiers would be hard-pressed to say what our presence in Afghanistan and Iraq has to do with protecting the American way. Superman would weep. Politics aside, we send these young men and women out to fight and die, but those who survive are dumped back into civilian life, often in the grip of PTSD and barely able to cope with life back home.

Jason Pete (Wayne) has served three tours in Afghanistan and has returned home to a loving wife Emily (Jude) and a four-year-old daughter. His body is scarred with wounds received in service, but it is his mind that is more deeply wounded and less apparently so. The VA provices him with a psychiatrist (Norton) but the sessions don’t appear to give him much peace. He turns to drinking and pills to ease his inner pain, but it doesn’t help. A friendly local police officer (Mullinax) tries to guide him through, but will it be enough?

The movie makes us aware – if you weren’t already – that our vets are committing suicide in terrifying numbers. It doesn’t directly address the question, but certainly most of us will hbe thinking it – if we can afford to spend money on new tanks and planes and battleships we don’t need, why can’t we spend the money to give our servicemen and women the post-deployment care they need and deserve? It is truly a national scandal.

It is a truly worthy subject for a film, but the execution is a bit lacking. Much of this is due to the low budget, which is readily apparent in the action scenes. Filmed locally in Alabama with a local crew and cast, there is some inexperience showing in terms of on-camera performances, which tend to be a litte wooden. There are a few relatively well-known names in the cast, including former Waltons star Judy Norton as the psychiatrist (she also co-wrote the script with the director), and veteran character actor Robert Miano as Jason’s commanding officer, but while their performances are more relaxed, there are a number of performers who don’t look comfortable in front of the camera.

The filmmakers talked to more than fifty veterans and their families to get their impressions of how they coped with the return of warriors to civilian life; every one of them, it was reported, had served with someone who had killed themselves, attempted to or was dealing with severe PTSD. I assume they used some of those stories here, and to be truthful, there are some moments that are incredibly gripping and harrowing, but more often than not, this feels like other films on the subject that have dealt with the same topic. I’m wondering if the filmmakers might not have served the subject better by making a documentary and interviewing the various family members on-camera rather than create a drama around it; something tells me the real stories would be far more compelling than this.

REASONS TO SEE: The filmmakers admirably turn their camera on a still very real and serious problem that has yet to be effectively addressed.
REASONS TO AVOID: Standard issue for the genre.
FAMILY VALUES: There is a fair amount of profanity as well as some war violence.
TRIVIAL PURSUIT: The Pete house in the film was demolished after filming was completed to make way for a new road.
BEYOND THE THEATERS: Amazon, AppleTV, Fandango Now, Google Play, Vimeo, Vudu, YouTube
CRITICAL MASS: As of 11/10/20: Rotten Tomatoes: No score yet, Metacritic: No score yet
COMPARISON SHOPPING: When I Came Home
FINAL RATING: 5/10
NEXT: Team Marco 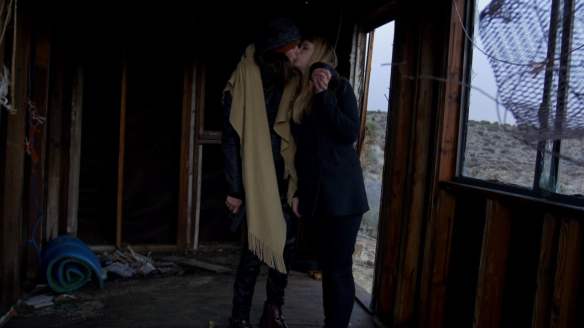 A desolate place for a denouement.

“O what a tangled web we weave when first we practice to deceive.” Walter Scott wrote those words in 1806 and they are as true now as they were then. Perhaps, even more so.

A young girl (Grace) is jogging in the woods when she is tackled and restrained by a masked man. That man turns out to be Juan (Ovalie), a career criminal and the girl turns out to be Emily, the daughter of corrupt CEO Donald Meyer (Kauffman). But all is not as it seems; it turns out that Juan and Donald are in cahoots and intend to bilk Emily’s mom Christina (Alexander) for the ransom money. But who is in bed with who? And who is that elegant man (Miano) really? I’m sure you have a pretty good idea, given the film’s title.

This is a movie that has all sorts of twists and turns – perhaps, too many. Everybody in the movie appears to have an angle, and the only really honest one is Juan who at least is honest about being a criminal, but as it turns out everyone in this movie is stabbing someone in the back and these twists become a little too old and by the time the final one takes place, the viewer is almost numb to it.

There are some supernatural elements to the movie which make this as much a horror movie as a crime thriller, but Story probably would have had a better movie if he had eliminated the supernatural elements – the film’s advertising gives one of the larger twists away, although it isn’t something even casual movie fans shouldn’t be able to figure out well in advance. The constant course reversals detract from some decent performances and what might have been an edge-of-the-seat thriller. What we end up with is a fairly decent supernatural thriller that collapses under the weight of its own plot twists.

REASONS TO SEE: The cast delivers on some surprisingly strong performances, and Story creates a reasonably creepy atmosphere.
REASONS TO AVOID: Overuses plot twists.
FAMILY VALUES: There is profanity, violence, sexual content and a scene of rape.
TRIVIAL PURSUIT: In addition to being a filmmaker, Story is also a musician, record producer, author, naturalist and activist.
BEYOND THE THEATER: Amazon, AppleTV,  Google Play, Microsoft, Vudu
CRITICAL MASS: As of 10/22/20: Rotten Tomatoes: No score yet; Metacritic: No score yet.
COMPARISON SHOPPING: Angel Heart
FINAL RATING: 5/10
NEXT: Martin Eden