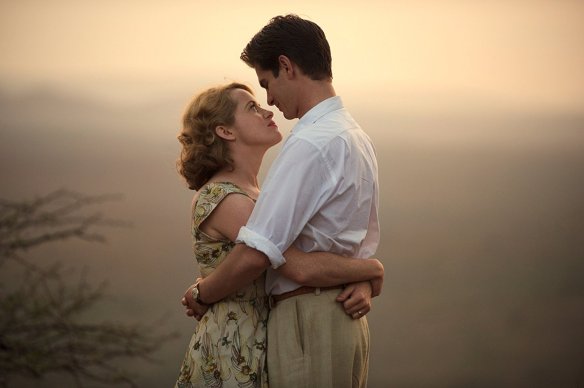 Hollywood still knows how to capture romance in a single frame.

As a disabled man, I’m keenly interested in depictions of how the disabled were treated in years past. The picture is not a pretty one; often, those who had any sort of deformity or disability were warehoused, shut away from public view as much as possible. Those in extreme situations were often left to await death in depressing, grim hospitals with doctors who felt their job was merely to keep them as comfortable as possible until the end inevitably came.

This is not even on the radar of young Robin Cavendish (Garfield) in the early 1950s however. Young, healthy and exuberant to a fault he is a British Army veteran who is almost ridiculously athletic; he seems to excel at every sport he tries his hand at. Now that the war is over, he works as a tea exporter, travelling around the world.

But he runs into the beautiful Diana Blacker (Foy) at a cricket match and everything changes. He falls deeply, madly in love with her and she with him. He isn’t wealthy (she comes from privilege) but he gets by and it isn’t long before the two get married and she is joining him on his adventurous life, going on safari with him in Kenya while he hunts down tea leaves for English tea drinkers. It isn’t long before she is, as they used to say back then, with child.

But their idyllic life comes to a screeching halt when he gets ill and collapses. He is diagnosed with adult onset polio and is completely paralyzed from the neck down. He is unable to even breathe on his own. Kept alive on a respirator, Robin is flown back to England and put into a hospital where he can be properly cared for which in this case means waiting for the Grim Reaper to come knocking. Robin sinks into a deep depression, knowing the prognosis is death after two or three months of waiting. He doesn’t want to wait, in fact.

But Diana will have none of that kind of talk. Keep Calm, and Breathe is essentially her message. Robin wants to die at home; Diana has other ideas. She wants him to live at home. So she purchases a Regency-era home in the country and a respirator and her old nanny (Raison) is there to help nurse her husband.

This is a great improvement and Robin is infinitely more cheerful but he wants more. With the help of a mechanic friend (Bonneville) he helps design a wheelchair with an attached respirator. The world begins to open up a little. Soon he figures a way to outfit a car so that Robin can travel further afield. Slowly, it becomes clear that Robin isn’t about quality of life anymore; he’s about life itself.

This is a somewhat rose-colored version of the real life story of Cavendish and his family. Many innovations that help the disabled be more mobile (like car lifts) have come as a result of innovations that Cavendish and his friend Teddy Hall created. I wasn’t familiar with Cavendish before seeing this but the disabled community owes a great deal to his advocacy that even those who are severely disabled as he was could lead fulfilling, productive lives.

Garfield captures both sides of Cavendish beautifully; the dark depressed side and the upbeat, never-say-die side and he does it while spending most of the picture flat on his back and unable to move his limbs. Garfield manages to get a great deal across with just his face; he also manages to stay still which is never an easy task. Considering his performance here is at least the equal to his last one in Hacksaw Ridge which netted him an Oscar nomination, it’s not out of the range of reason that he might get another one here. It’s the kind of role Oscar tends to like.

Foy, so good in the Netflix series The Crown ups the stakes here and shows she has big screen potential as well. Her Diana Cavendish is heroic and if the screenplay makes her a bit more saintly than she likely was, it’s certainly understandable. The real Cavendish lived longer with polio-related total paralysis than anyone in the history of Great Britain and while that is admirable, it can’t have been easy on his wife. Watching over someone who is that disabled is a full-time job and one of the most stressful ones that you can have.

First-time director Andy Serkis (yes, the motion capture king) doesn’t try to reinvent the wheel but he does have a good eye for the English countryside, turning it into an almost Bronte sister-like look. The supporting cast isn’t super well-known here in the States but they are all excellent and there isn’t a misstep among any of the performances that I could detect.

The movie does get a little bit maudlin towards the end and the last fifteen minutes seem manipulative enough that I think that a lot of critics who tend to hate that kind of thing probably gave the film a worse review than it deserves because of it. Nonetheless this is an uplifting tribute to the resilience of the human spirit that is tonic in a time where we seem to hear nothing but bad news about the negative aspects of the human spirit nonstop.

REASONS TO GO: Garfield could net another Oscar nomination for his work here. Lovely cinematography and Bronte-like vistas elevate the film.
REASONS TO STAY: The film gets somewhat maudlin towards the end.
FAMILY VALUES: There are some mature thematic subjects including discussions of suicide, some bloody medical images and some mild profanity.
TRIVIAL PURSUIT: Jonathan Cavendish, Robin’s real-life son, went into film production and is one of the producers on this film.
CRITICAL MASS: As of 10/21/17: Rotten Tomatoes: 57% positive reviews. Metacritic: 51/100.
COMPARISON SHOPPING: Gleason
FINAL RATING: 7.5/10
NEXT: The Florida Project