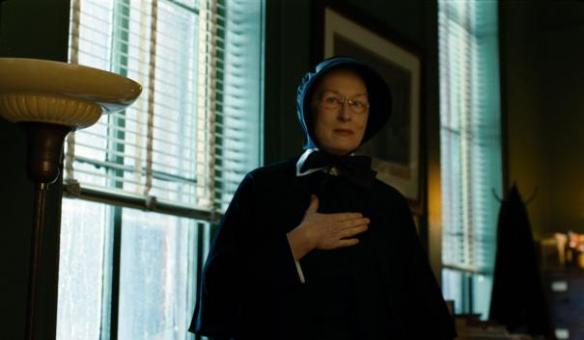 Sister Aloysius shows you where her heart would have been if she had one.

If one has faith, one must first understand doubt. Doubt is the antithesis of faith, its polar opposite. You cannot have faith if you have doubt…can you?

It is December of 1963 and America is reeling of the Kennedy assassination. Even in the insular world of the parish of St. Nicholas, in the most American of Catholic enclaves (the Bronx), the outside world has crept in. The ramrod straight-spined principal of St. Nicholas is Sister Aloysius (Streep). For her, the world is unchanging, the same as it has ever been. Children are to be watched at all time for they are surely up to no good. Progress is a word to be spoken with the pursed expression of one sucking a lemon. There is only the sureness of faith, the knowledge that what she knows is right and true and that the discipline of her faith will carry her through.

Into this world comes Father Flynn (Hoffman), a boisterous new priest who not only accepts change, he embraces it. With the reforms of the Vatican II conference sweeping through the Church, he is eager to embrace the new progressive Church which seems to be on the verge of making itself more accessible to its flock.

Where Aloysius is stern and disciplined, Flynn is easygoing and charming. The nuns eat in rigid silence, speaking only when spoken to and fearful of the vitriolic wrath of Aloysius. The priests’ meals are boisterous, raucous with laughter and a spot of the hair of the dog. It seems inevitable that Aloysius would take a dim view of Flynn and vice versa. A collision between the two is unavoidable.

When Flynn takes an interest in Donald Miller (Foster), the only African-American child in the school, at first it seems innocent. Aloysius however seizes the opportunity to declare war on her enemy. She commands her nuns to keep an eye on Flynn for untoward behavior and Sister James (Adams), Miller’s teacher and a sweet innocent young thing who is constantly upbraided by Sister Aloysius for being inexperienced and soft on her students, becomes her unexpected accomplice. She notes that Father Flynn calls Miller to the rectory alone one day, and that when the boy returned he seemed upset; further, she detected the smell of alcohol on the boy’s breath.

That is all the ammunition that Sister Aloysius needs. Although even Sister James comes to believe in Father Flynn’s innocence, Aloysius plows on like a bulldozer, sweeping every unwanted explanation from her wake. Father Flynn’s protestations fall on deaf ears. Aloysius contacts the boy’s mother (Davis) to tell her of her suspicions but receives a surprising reaction in one of the film’s best scenes. Sister James has doubt; Sister Aloysius has faith. Which is the stronger?

This is the kind of movie that invites discussion and provokes thought. Non-Catholics will relate to this in a different way than Catholics (like me) will. Faith is a different thing for the Catholics of the early ‘60s. It is, as portrayed by Streep here, an Absolute, a capital letter that brooks no argument.

Shanley wrote this as a play and it won four Tony awards for it’s year-long Broadway run. The problem with converting plays into movies is that they can seem stage-y at times but that isn’t the case here. Shanley, who wrote Moonstruck and directed Joe vs. the Volcano a couple of decades back, creates an environment that is three-dimensional (and I’m not talking about the 3D film process) that is full and real. You can feel the chill of winter and the warmth that comes from the pulpit.

A script this strong deserves a strong cast and it gets it. The four main actors would all get Oscar and Golden Globe nominations for their performances here, and quite frankly they all deserved the statuettes that they didn’t win. Streep delivers one of the most unforgettable performances of her distinguished career as the rigid, inflexible Sister Aloysius; she literally wills her way into being and one can see the iron in her soul throughout. Hoffman is also at his best, creating a priest who is flawed as a man and completely unprepared for the onslaught of Sister Aloysius. Davis, a relative unknown, has but one scene with dialogue in the movie but she holds her own against one of the greatest actors of her generation and delivers a career-making performance. Adams has the kind of role that you would think simply would be overwhelmed by the others in the film, but she delivers the kind of performance that is at the top of her game, making a mousy role stand out in a crowd of lions.

This isn’t always an easy movie to watch but keep in mind that this isn’t about whether Father Flynn behaved improperly with young Donald Miller. It is, when all is said and done, about the title – doubt and its lack thereof. Doubt is a necessity; without it we cannot question. If we cannot question, we cannot grow and if we cannot grow, we die. It’s that simple. This is one of the most powerful films of 2008 and is a must-see for everyone who loves films that make you think.

WHY RENT THIS: The contest of wills between Sister Aloysius and Father Flynn at the heart of the movie is brilliantly acted by Streep and Hoffman; their confrontations are worth seeing by themselves.

WHY RENT SOMETHING ELSE: The subject matter can be very wrenching and the resolution of the movie might leave some with a bad taste in their mouths.

FAMILY VALUES: The situations are very adult and will likely go over the heads of the more innocent sorts. Proceed with caution; the movie raises questions that you may not be prepared to answer right away.

TRIVIAL PURSUIT: This film, which is Shanley’s first directorial effort in 18 years, is dedicated to Shanley’s first grade teacher who was the inspiration for Sister James.

NOTABLE DVD EXTRAS: There is a roundtable discussion with the cast on the differences in performing styles and preparation between theater and film, as well as a feature on the Sisters of Charity, the order depicted here and a discussion with several nuns of that order on the changes that swept through it at about the time the movie is set.