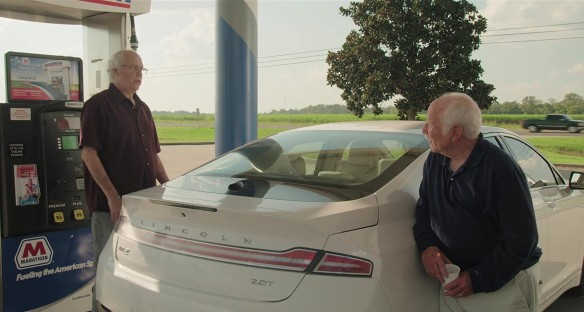 As you get older, life can be a gas.

As someone who is going to hit the big six-oh this year, films about being old have more of a resonance with me lately than usual. At the same time, as I am writing this, I’m listening to the latest album by Hamerkop.  Age is, truly, just a number.

Don’t tell Hollywood that, though. Most comedies about elderly sorts have a pretty condescending attitude towards the AARP generation. We’ll get more into that in a minute, though; let me tell you a little bit about the plot of this one though. Al Hart (Chase) was once upon a time a talent manager for some of the most talented stand-up comics in the business, but now he’s retired and mourning his wife. His granddaughter Jeannie (Micucci) is concerned that Al has been doing a lot of falling down lately. She is anxious for him to move into a facility where he can be seen to; Al is against the idea but after a particularly nasty spill agrees reluctantly.

At the retirement village, Al discovers Buddy Green (Dreyfus) is a resident. Buddy was Al’s first client and had the makings of being a major star; Al had him booked on the Ed Sullivan show which would have established Buddy as a major star. Inexplicably, he never showed up and turned his back on comedy, instead choosing to raise a family and become a podiatrist. Talk about the shoe being on the other foot.

But the what-ifs have never really left Buddy and Al, seeing the parade of residents to the morgue figures that Buddy deserves a last shot to see if he had the stuff; he books Buddy on a cross-country tour, starting off in cruddy venues in Podunk towns gradually working up to bigger shows until the big one – the Stephen Colbert Late Show in the Ed Sullivan theater in New York. Along the way, the two bicker like an old couple, pick up a free-spirited artist in Kansas City (MacDowell) that Al becomes sweet on, and discover that it’s never too late to pursue a dream.

If that last sentence sounds a bit maudlin, it’s meant to. The movie plays it about as safe as a movie can be played, with the exception of a magic mushroom sequence in which Al trips, imagining a musical number and a carriage ride with Abe Lincoln at the reins. No, I don’t know why.

Remember I talked about Hollywood’s condescending attitude towards the aging? This is the kind of movie that portrays old folks doing shrooms and having sex as kind of “isn’t that cute.” Let’s do the math; people turning 70 this year were born in 1950; they were in their teens and 20s in the 60s and 70s when just about everyone was doing drugs and having sex. I think Hollywood sees the elderly still as the Leave it to Beaver generation, except that they were doing drugs and having sex back then too. Guess what, America? Your grandparents used to get high and fool around. Get over it.

Worse still, the humor is of the safe, don’t-offend-anyone variety, which makes me want to scream. I’m not the biggest Chevy Chase fan ever, but dammit, the man was an integral part of the original Not Ready for Prime Time Players, and played a major role in one of the most subversive comedies ever made – Caddyshack. Can we not accept that there are some great comedic minds hitting their 70s now and capable of making comedies that can be bigger game changers than some of the modern crop of comics are currently capable of making? Dreyfus – who is as good as he ever was in this movie – as well as Chase and MacDowell all deserve better than this mildly entertaining, eminently forgettable project.

REASONS TO SEE: Dreyfus is a gift.
REASONS TO AVOID: Unnecessarily maudlin.
FAMILY VALUES: There is a good amount of profanity including plenty of sexual references, as well as some drug use and adult themes.
TRIVIAL PURSUIT: This is the first leading role for Chase in a mainstream film since Snow Day in 2000.
BEYOND THE THEATERS: Netflix
CRITICAL MASS: As of 5/30/20: Rotten Tomatoes: 53% positive reviews, Metacritic: 31/100
COMPARISON SHOPPING: The Sunshine Boys
FINAL RATING: 6/10
NEXT: Glass