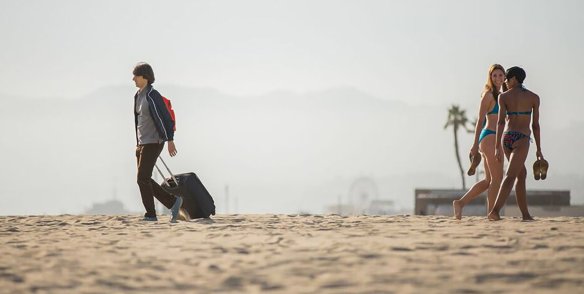 Life is a day at the beach for Demetri Martin.

You never know when your life is going to change irrevocably – or how. It could be the death of a loved one. It could be a romance that will turn out to last a lifetime. When it comes right down to it, life is a roller coaster ride we take while blindfolded.

Dean (Martin) is a cartoonist (and by the way, Demetri Martin drew the New Yorker-style cartoons seen throughout the movie) who lives in New York City. He has just broken up with his fiancée (Vitkowski-Bennett) and he is having trouble finishing his second book of toons. One of the reasons for that is he is still grieving for his mother (Marcisak) who recently passed away unexpectedly.

His life is in a bit of a stall. His relationship with his father Robert (Kline) is tenuous to say the least; neither man approves of how the other is grieving. When Robert drops the bombshell that he plans to sell the family home that Dean grew up in, Dean refuses to even discuss the matter and when Robert insists that he start clearing out his room, Dean flees to Los Angeles, ostensibly to listen to a job offer (that he never really took seriously to begin with) but more to hang out with his buddy Eric (Scovel) who takes him to a party where he meets Nicky (Jacobs), an Angelino whom he falls head over heels for – literally. His first act when he makes eye contact with her is to do a face plant on the floor.

Nonetheless their relationship starts to take off. Meanwhile, back in New York City, Robert is developing feelings for his real estate agent Carol (Steenburgen) that he’s not ready to act on, or at least thinks he isn’t. They do go out but the date ends disastrously. Both men are at a crossroads and need to get on with their lives, but do they have the will to move on?

If the movie sounds like something Woody Allen might have done back in the 70s, you’re probably right. Martin’s sensibility as a writer seems to fall in line with that of the Great Neurotic. However, this isn’t straight rip-off by any means; while Martin is almost certainly influenced by Allen, he isn’t slavish about it. Dean is certainly somewhat neurotic (his cartoons since his mother passed all have to do with the Grim Reaper) but not of the “ohmygawd he needs therapy” variety, which was where Allen mined much of his best material.

Martin is definitely a multi-threat performer; not only is he a terrific stand-up but he shows that he has the ability to be a lead in a theatrical narrative. Yes, the Beatles haircut is distracting but no more than some of the crazy hair-dos of comic actors we’ve seen of late. Martin’s delivery is a little sad sack (which fits the circumstances) but he has a kind of puppy dog cuteness that will certainly win him some fans. As a director he’s still learning his craft, but this is an effort that is impressive for a first full-length feature.

While Martin has a promising future, there are some cast members who are terrific now. Casting Kline and Steenburgen – so wonderful together in My Life as a House – was inspired and the two still have tons of chemistry. Some critics have found the storyline involving the two of them more interesting than the one between Martin and Jacobs and I can’t say as I disagree. I wouldn’t mind seeing more movies with Kline and Steenburgen in them. I would also like to see Jacobs’ role a little more fleshed out. Like Martin, she also has a bunch of screen presence and could be an onscreen force someday.

While the film wasn’t as consistently funny as I might have liked, it had enough humor in it to tickle the funny bone yet didn’t sink into parody or low comedy. The humor is, like Martin’s stand-up act, intelligent and a bit off-kilter. While this isn’t a movie that is going to make big waves on the Hollywood ocean, it should get enough notice to further the careers of everyone involved, or at least I hope so. It certainly is worth indie film lovers taking the time to check out.

REASONS TO GO: Martin has a whole lot of potential. A stellar supporting cast helps power the movie.
REASONS TO STAY: The film comes off in places as a knockoff of Woody Allen.
FAMILY VALUES: There’s a fair amount of profanity as well as some sexually suggestive material.
TRIVIAL PURSUIT: Jacobs and Heelan also star together in the Netflix series Love.
CRITICAL MASS: As of 6/17/17: Rotten Tomatoes: 63% positive reviews. Metacritic: 58/100.
COMPARISON SHOPPING: Sleepwalk With Me
FINAL RATING: 7/10
NEXT: The Journey