These cops have no idea what’s coming.

In many ways, our worth is determined by how our resolve is tested. It is at our worst moments when the best in us is drawn out. When the city of Boston was faced with an attack on their very identity, they showed the world more than extraordinary strength; they were Boston strong.

Tommy Saunders (Wahlberg) is not having a good day. He’s a gifted police officer who also has a gift for opening his mouth at the wrong moment. He has one more punishment duty to deal with – working as a uniformed officer at the finish line of the Boston Marathon. That also means putting on the yellow reflective vest which he thinks makes him look silly. His wife Carol (Monaghan) thinks it looks cute. To top it all off, Tommy’s knee is aching after kicking in a drug dealer’s door the night before and he forgets his brace at home; he asks Carol to bring it down to the finish line for him.

But Tommy’s day is about to get worse. Two Chechnyan brothers, Douchebag #1 (Melikidze) and Douchebag #2 (Wolff) have plans of their own. They plant two homemade bombs among the throngs watching the race at the finish line. After they stroll away, lost in the crowd, the bombs detonate, killing three people (including a child) and wounding scores. All is mayhem at the finish line.

Tommy takes charge, getting ambulances routed in and telling race officials to keep runners away. Medical personnel – some of them ex-military who knew what to do with wounds of this nature – respond immediately. Tommy’s boss, Commissioner Ed Davis (Goodman) takes charge as the FBI, in the person of Special Agent Richard DesLauriers (Bacon) who takes immediate charge once he recognizes this was an act of terrorism.

But finding the bombers is like finding a needle in a haystack. Even with all the cameras trained on the event, not many were pointed at the crowd. With Tommy’s help knowing the area as well as he does, the authorities begin to close in on the perpetrators of this vile act but it will take the largest manhunt in U.S. history to catch these guys.

I was really glad I saw the documentary on the Marathon bombing (see below) the night before I saw this movie, mainly because I was able to see how close to the actual events the movie came. While the documentary focused on the victims and their recovery, this movie has more focus on the manhunt and those participating in it.

One of those participating in it is Saunders and while Wahlberg does a great job of developing his character, one of the big problems is that Saunders is wholly fictional. We soon realize that because he appears at nearly every major plot point in the film which after awhile takes me as a viewer out of the realism of the movie because other than that the movie is extremely realistic which is an impressive accomplishment for a Hollywood film.

The recreation of the bombing itself is impressive; Berg masterfully works in actual camera footage of the blast along with staged re-creations of it. Berg repeats this at various portions of the film. The Patriots Day bombing was one of the most documented incidents in history and there is a lot of footage available, some of it wildly seen, some of it not so much. Still, we get a good glimpse of the various stages of the manhunt, from the bombing itself to the capture of Douchebag #1 and Douchebag #2.

If you’re wondering why I don’t use the names of the two bombers, it’s because I don’t want history to remember them. If I could, I’d expunge their names from every document, from every post – from everywhere. People like this should be erased from history. They don’t deserve to be remembered.

On the other hand, the good people of Boston – the survivors of the bombing, the law enforcement personnel who chased and caught those miserable scumbags, the medics and surgeons who worked tirelessly on healing the wounded, even those who came out in support of Boston. There has been some grousing that this was made too soon after the bombing – only three years had passed when this was released. I probably am not someone who can judge this properly; I would leave that to the citizens of Boston, particularly those affected by the tragedy. However, this is certainly a movie that honors and respects the victims and those who fought to bring the douchebags to justice so all in all, I don’t think anyone can complain overly much about that.

REASONS TO GO: The film is surprisingly accurate. Strong performances throughout the cast buoy the film.
REASONS TO STAY: There is a loss of credibility by having Wahlberg play a fictional character.
FAMILY VALUES: There is violence and graphic images of injuries, some drug use and profanity throughout.
TRIVIAL PURSUIT: This is the third collaboration between Berg and Wahlberg that was based on a true story; the other two are Lone Survivor and Deepwater Horizon.
CRITICAL MASS: As of 2/27/17: Rotten Tomatoes: 81% positive reviews. Metacritic: 69/100.
COMPARISON SHOPPING: Marathon: The Patriots Day Bombing
FINAL RATING: 7/10
NEXT: Decanted: A Winemaker’s Journey 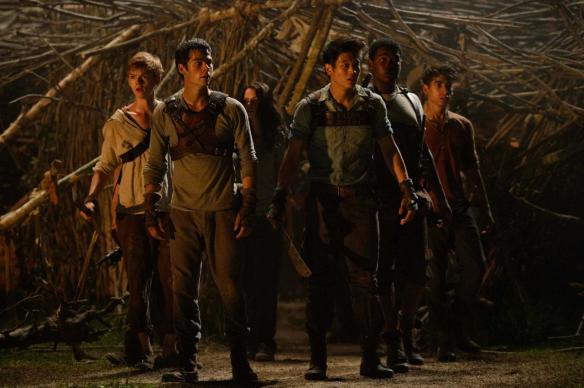 There’s no David Bowie at the center of this labyrinth.

We generally have a good sense of where we are and who we are. When we wake up in the morning, we know we are in familiar territory, where we’re supposed to be. But what if you woke up one morning and didn’t have a clue where you were – or even your own name?

But that’s what happens to each and every boy in the strange place they call the Glade. A grassy knoll with a small forest surrounded by huge walls, every month without fail an elevator brings up a new arrival and supplies. What doesn’t come up the elevator they grow. It’s a fairly pastoral life. When the boys – and they’re all boys – wake up, they have no memory of who they are, where they are or where they came from. They’re just there. After a day or two, they remember their first name, but that’s all.

This month’s new arrival is Thomas (O’Brien). He is given the lay of the land by Alby (Ameen), the charismatic leader of the boys. Thomas is a curious sort. What’s beyond the walls? The maze. Why don’t you just leave? We can’t. Why not? There are monsters. They’re called Grievers. Nobody who spends the night in the maze survives. Is there a way out? We’re looking for it. We send runners into the maze every day to map it out. We haven’t found the exit yet but we will. How long have you been looking? Three years.

Thomas is befriended by Chuck (Cooper), a younger heavyset boy, and Newt (Brodie-Sangster), a quiet British chap. There’s also Gally (Poulter), a by-the-book sort who detests change and lives in justified fear of what’s out there, and Minho (Lee), the leader of the runners who comes to a grudging respect for Thomas who seems to be a born leader. But who put them there and why?

This is based on the classic James Dashner young adult sci-fi epic, the first of several books in a series. It’s one of those books that, like the TV series Lost always winds up generating a lot of questions and for every question it answers raises two or more new ones in its place.

Definitely meant to appeal to young adolescent boys in the same way Twilight and The Hunger Games appeals to young adolescent girls, in Thomas we have a taciturn, curious and brave young man. Teen Wolf star O’Brien plays him with a kind of blank expression most of the time, pulling out grief and rage when the occasion calls for it. I don’t know if it’s a sign of limited range or that range wasn’t called for here; it left me a little bit cold for the character.

Most of the support is all right, particularly Poulter playing a very different character than his geeky kid in We’re the Millers. Patricia Clarkson stops by for a cup of coffee near the end and Brodie-Sangster is effective as Newt. Scodelario who is the only female with any appreciable screen time seems to have been cast mainly for her resemblance to Kristen Stewart and Lee is actually pretty good as a kind of junior John Cho.

Cooper comes off with the most promise as a more likable version of Chunk from The Goonies. Chuck has a certain hero-worship for Thomas but is capable of standing on his own two feet. Chuck is loyal to a fault and may not have the physical presence of Thomas but has his back unconditionally. Miller captured all of that and in many ways was much more interesting than O’Brien. I’d much rather have spent more time with Chuck than with the more conventional hero Thomas.

The Grievers are nightmarish, a kind of biotech weapon that is part machine and part creature, spiders with silver legs and many, many teeth. They also have stingers that inject a venom into their victims that drives them violently made, wreaking further havoc. The easily impressionable who are prone to nightmares should think twice about seeing this one.

I left characterizing this as a kind of Lord of the Flies with hints of Lost and Divergent thrown in for good measure and that’s as much hint about the rest of the story as I’m willing to give. There is plenty of CGI, most of it okay but none of it really awe-inspiring.

The ending is pretty much there to set up a sequel (which has already been greenlit based on this film’s successful first weekend). There really isn’t any feeling of a conclusion and so I left the theater curiously unsatisfied. I would need another movie to allow me feel like I’d actually seen a complete movie beginning to end.

REASONS TO GO: Genuinely scary monsters. Some good supporting performances. Definitely for those who wanted to see Lord of the Flies done by the Lost creative team.
REASONS TO STAY: O’Brien is a bit wooden. Unsatisfying ending.
FAMILY VALUES:  There is some violence and some foul language. The Grievers are pretty nightmare-inducing as well.
TRIVIAL PURSUIT: This is the fifth movie in which Judd and Freeman have appeared together in.
CRITICAL MASS: As of 10/9/14: Rotten Tomatoes: 64% positive reviews. Metacritic: 56/100.
COMPARISON SHOPPING: Divergent
FINAL RATING: 6/10
NEXT: Definitely Maybe!