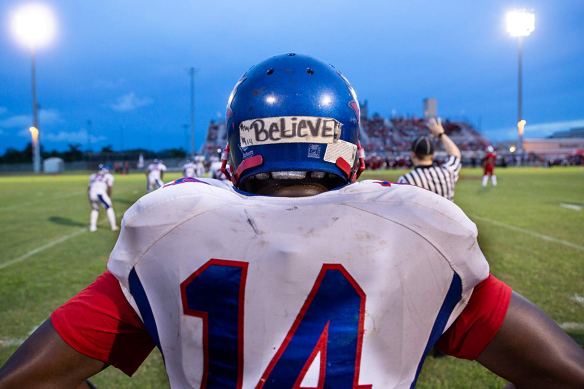 There is nothing that says optimism so much as high school football.

High school is a time in our lives that we endure while we’re living it and, often, treasure more when we’re older than when we’re actually there. The rituals and ambitions of high school are pretty much universal but there are places that they take on a more urgent quality.

Pahokee is a small agricultural town in South Florida on the shores of Lake Okeechobee. Most of the residents are either African-American or Hispanic. Much of the work in the town revolves around working in the fields or in the processing plants. There is little more than that for the young people to look forward to; most who have ambitions beyond that know that they will have to leave Pahokee to get a college education

This documentary follows four students in Pahokee High School’s senior class of 2017 in a particularly turbulent year at the school. Jocabed Martinez is the daughter of Mexican immigrants who managed to save enough from working in the fields to open their own roadside taqueria where she helps out after school working the cash register. She has been doing tremendously well academically and has a realistic chance at an academic scholarship to a four-year college. Na’Kerria Nelson is an outgoing and personable cheerleader who is running for the equivalent of homecoming queen. She has ambitions of getting into a nursing program but with fair to middling academics, she needs every edge she can get and will likely have to pay for her own education. Junior Walker is a drum major in the school band who is also father to a cute-as-a-button toddler, a daughter whom he dotes on. With few employment options and a baby to support, college isn’t likely as he seeks employment in the town. Finally, BJ Crawford is the bruising center and co-captain of the football team that is challenging for the state championship. Both of his college-educated parents are fully in support of him getting an athletic scholarship but his dad cautions him to have a plan B just in case football doesn’t work out for him.

The camera follows them through most of the high school high points, from homecoming, the football state playoffs, prom and graduation. In between there will be moments of triumph, disappointment and even tragedy as on Easter Sunday there was a shooting in the local park. The camera crew happened to be there and captured the chaos and terror of the moment.

There are plenty of compelling moments throughout including the shooting sequence. The problem is that the movie really leaves the audience hanging; the football team suffers a devastating blow and it is essentially left without any sort of context or follow-up. We are often flies on the wall but the teens are rarely questioned directly. There are some video diaries recorded on cell phones and those are weaved in skillfully but I would have liked to have seen the teens talk about some of the things that happen onscreen beyond the platitudes you would expect.

As a glimpse of rural life particularly for those of the ethnic groups previously mentioned this is a pretty decent diary. It could have used some more context and more discipline rather than stream of consciousness. There are a lot of shots of fields being tended, distant factories, trucks roaring down small-town roads used as linking devices. There are also some lovely sunset shots. More grating is that there are some wonderful moments all throughout the movie but they are essentially lacking any sort of cohesion. With a bit of a firmer hand in the editing bay this might have been an extraordinary documentary.

REASONS TO SEE: There are some truly extraordinary moments throughout the movie.
REASONS TO AVOID: The story lacks cohesion; the film could have benefited from more disciplined editing.
FAMILY VALUES: There is profanity and some violence.
TRIVIAL PURSUIT: Bresnan and Lucas lived and worked in Pahokee making short films prior to tackling this feature documentary.
CRITICAL MASS: As of 3/3/19: Rotten Tomatoes: 100% positive reviews: Metacritic: No score yet.
COMPARISON SHOPPING: Hoop Dreams
FINAL RATING: 6.5/10
NEXT: Ash is Purest White