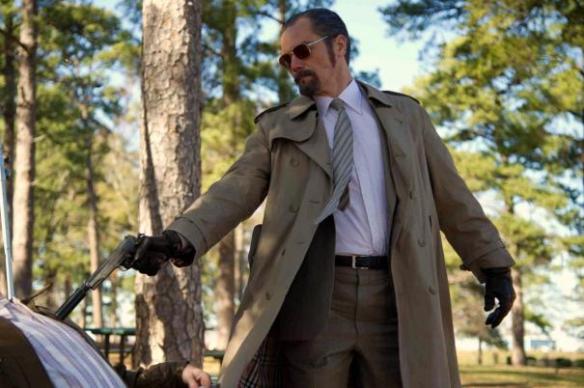 Michael Shannon has a unique way of firing his agents.

It’s always the quiet ones, the ones who lose it and go on a killing spree. Contract killers are another case altogether. These are men with ice in their veins, able to kill without remorse or emotion. It’s a job for them, no less upsetting than someone who sells cars for a living.

This is the start for a whole new career for Richie as he ices guys on Roy’s say-so. When a coke deal is botched by Josh who kills the dealers involved, Roy is forced to lay low for awhile, leaving Richie unemployed. As money gets tighter and Richie’s temper gets more volatile, Richie hooks up with Mr. Freezy (Evans), a freelance contract killer who works out of an ice cream truck. He teaches Richie the proper use of cyanide and the trick of freezing bodies and then thawing them before dumping them, throwing police off on the correct time of death. It is for the latter practice that Richie is given the nickname “The Iceman.”

When DeMeo finds out about Richie’s new freelancing scheme, he goes ballistic which doesn’t bode well for Richie’s future state of health. When Roy brings in Leonard Marks (Davi) from one of the big crime families in New York, it looks like Richie’s days are numbered but Roy and Marks have forgotten one prime directive – never ever piss off a contract killer.

This is pretty standard stuff for the true mob killer movie. Yes, Richie Kuklinski was a real person who claims to have killed between 100-250 people during his heyday from 1948 to 1986. He was also a family man who’s arrest stunned his neighborhood.

While the story remains pretty typical, the acting here is superb. Shannon, an Oscar nominee, shows that there are many more of those on the way (and likely a statuette somewhere down the line) with a powerful performance here which is doubly commendable because he doesn’t have a lot to work with. The real Richie was by all accounts a strong, silent type who wasn’t much of a communicator. He was more or less a psychopath who was paid for crimes he probably would have committed eventually in any case. Shannon gives Richie at least some personality, with cold eyes that erupt into volcanic fury when pushed. It’s a marvelous juxtaposition that gives the character depth that the real Richie probably didn’t have.

Ryder, who has been an infrequent screen presence of late, is absolutely amazing as the willfully oblivious Deborah. She knows that her husband is hiding something horrible, but chooses to ignore it. There’s nothing wrong if she doesn’t know there’s anything wrong, so she chooses to ignore it until it’s right in her face.

In fact the performances are what makes the movie. This is strongly acted throughout, from the barely-recognizable Evans to Franco in a brief cameo. It’s Shannon however who carries the movie and he does so with ease. He may well be this generation’s De Niro – not a traditional leading man sort but who elevates every movie he’s in. While Vromen is no Scorsese and this no Goodfellas it nonetheless doesn’t disgrace the genre created by that film. In fact, it’s a solid follower in it’s footsteps.

REASONS TO GO: A strong performance by Michael Shannon.

FAMILY VALUES:  A good deal of violence and a bit of gore, lots and lots of foul language and some sexuality.

TRIVIAL PURSUIT: James Franco was originally cast as Kuklinski but had to take the smaller role as Marty Freeman instead; Maggie Gyllenhaal was likewise cast as Deborah Pellicotti but had to drop out due to her pregnancy and Winona Ryder got the part.

NEXT: The History of Future Folk

Ryan O’Nan and America Ferrera look towards an uncertain future in the Heartland.

Some see war as a grand exercise in duty and honor, a means of achieving personal glory or perhaps advancing a cause through battle. Those of that mindset are not the ones usually on the front lines. Those warriors who actually fight, who risk life and limb are the ones who pay the price – even if they survive.

James (O’Nan) has returned home to Texas from his tour of duty a damaged soul. His body is OK, but the trauma of surviving unscathed sometimes is just as bad as the trauma of suffering grave injury. He can’t stop thinking about an ambush in which his buddy Henry (Klattenhoff) got hurt.

His wife Sarah (Ferrera) is only happy to have her man home at long last but it doesn’t take long for her to notice that he’s not the man who left for war all those months ago. He’s changed; he has become distant and brooding. She tries her hardest to break through; his best friend Michael (Ritter) tries as well but to no avail.

He takes a job in his father-in-law’s (Martinez) slaughterhouse but the scenes of death and butchery only serve to remind him of the carnage he witnessed in Afghanistan. He also begins to get suspicious of Sarah and Michael, wondering if they have a different agenda than his well-being.

James starts turning towards people who might have some frame of reference in understanding him, like his combat buddy Raymond Gonzales (Valderrama) who has returned home to a neighboring Texas town as well. Raymond is a volatile powder keg who is steadfast in his loyalty to his friends but with an unbelievably short fuse when it comes to everyone else. Together they decide on the spur of the moment to go visit Henry in the VA hospital. That meeting has unexpected consequences that lead to both James and Raymond going in unexpected directions – and Sarah may end up being caught in the crossfire.

The return of veterans home from war has been fodder for Hollywood for ages and none did it better than The Best Years of Our Lives which in essence set the template for movies like this one. In all honesty, I’m not sure what sort of experience Williams has with the military – whether he himself served or someone close to him – but he has the feel of it right.

Williams captures the camaraderie between brothers – as those who serve under fire inevitably are – with brevity and depth. There isn’t a lot of posturing here, the kind of lovefest you might find between drunks which is often how Hollywood portrays it. Instead there’s that simple, quiet knowledge that something has been shared that nobody else can understand unless they were there.

It helps that his cast does an excellent job here. There are no histrionics, no grand speechifying – just people trying to live their lives as best they can, keeping their heads down as much as possible and in general just getting on with things. It’s a quintessinally American outlook, the U.S. version of the stiff upper lip and Williams captures the attitude well.

I’ve been a big fan of Ferrera since I saw her in Real Woman Have Curves during Roger Ebert and Richard Roeper’s Floating Film Festival several years back and this might be her best performance to date. Sarah is a complicated character, a good woman who wants to be a good wife but one who has been alone for a long time and who now finds herself alone even though her husband is back home. It’s a heartbreaking performance and the emotional center of the movie.

O’Nan plays James as a cypher who keeps his emotions close to his vest. It’s not always an easy task to figure him out, but I think that it’s an honest portrayal; James should be difficult to peg. It gives the viewer a sense of what his family and friends are going through. It’s not a sympathetic performance maybe but it is a gutsy one.

Leo is one of my favorite actresses today and even though her part is small and very much in the vein of part she has been cast in seemingly every time out, she at least gives it enough subtle shading to make it unique. Ritter is showing signs of breaking out into legitimate stardom; he could be one performance away from achieving it.

The bleak and barren Texas landscapes are fine companions to the brutal images of the slaughterhouse. Some of those images might be disturbing to the sensitive; I understand the need for them though, although I might have used them a bit more sparingly. A little brutality goes a long way in a movie as understated as this one is.

Not everything works. Some of the more talky scenes seem to be at odds with the overall feel of the movie. The Dry Land is at its best when it is quiet. This isn’t a movie about bombast and noise; it is a movie about people quietly and perhaps desperately trying to cling to something while the world strips them of their dignity and even their humanity. There are some powerful messages to be had here when the movie is at its best; I would have wished for some more consistency  but there is enough worthy material to warrant keeping an eye out on Williams as  a potentially great filmmaker in the nascent stages of his career.

WHY RENT THIS: Taut performances from nearly all the cast. Some tremendous images, disturbing and otherwise.

WHY RENT SOMETHING ELSE: Uneven. The reach exceeds the grasp but just by a little bit.

FAMILY VALUES: There is a good deal of bad language, some sexuality and violence as well as some disturbing situations.

TRIVIAL PURSUIT: A number of the lead actors are TV sitcom veterans (Ferrera in “Ugly Betty,” Valderrama in “That ’70s Show” and Suplee in “My Name is Earl”).