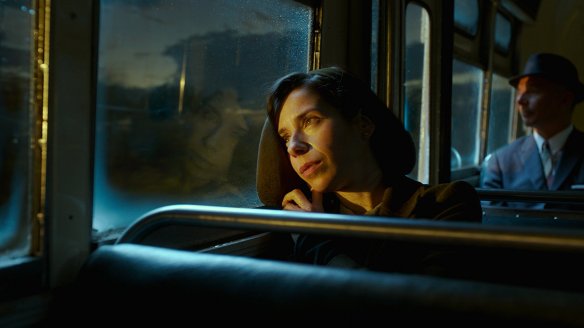 A bird may love a fish, the saying goes, but where would they live? Some romances, it is true, face greater obstacles than others.

Eliza Esposito (Hawkins) is a mute woman who lives in a ratty apartment above a movie theater along with gay commercial artist Giles (Jenkins) who is as lonely as Eliza is. She works as a janitor at a top-secret government lab on the outskirts of Baltimore along with her friend Zelda (Spencer) who nags her about being habitually late to work.

Into the lab comes “the most valuable asset” that they’ve ever hosted; an amphibious humanoid creature (Jones) who was discovered in the jungles of the Amazon, worshiped as a god by the natives. Security director Richard Strickland (Shannon) sees the creature as a potential means of putting the U.S. ahead of the Soviets in the space race which to this point in 1963 have been kicking America’s butt.

Strickland is under all kinds of pressure to deliver useful information but his scientists, particularly Dr. Hoffstetler (Stuhlbarg) are a bit hesitant to do the kind of research that Strickland is urging them to do – the kinds of things Dr. Mengele had no problem doing. Strickland becomes further enraged when, during a session when he is using an electric cattle prod on the creature, two of his fingers are cut off. Strickland, always what you might call tightly wound, suddenly finds himself wrapped even closer to absolutely losing it.

But Eliza is drawn to the creature; she finds it to be gentle and non-judgmental and like herself, unable to communicate verbally. The creature is drawn to her kindness – she feeds it hard-boiled eggs and plays jazz on a portable phonograph she smuggles in. However, it has come to the attention of Gen. Hoyt (Searcy) who is in charge of the project that the Russkies are aware of the creature and have designs on it themselves. Eliza overhears the plan – to vivisect the creature and learn as much as they can before the Russians either kidnap the creature or destroy it in such a way that the Americans can learn nothing.

Eliza decides that’s not going to happen and enlists the help of Giles in getting her help. Zelda is reluctantly drawn in and when Dr. Hoffstetler discovers what she’s up to, gives her tacit assistance. Eliza takes the creature home to live in her bathtub, waiting for the right time to release it into a canal that leads to the ocean and can lead the creature back home but the two have begun…umm, mating and saying goodbye is not going to be easy for either of them, particularly since neither one can speak.

This is one of the most beautiful and well-told stories of the year. There is a fairy tale aspect to the film, combined with a kind of classic Hollywood feel (there is a fantasy sequence in which Eliza finds voice and sings and dances with the creature which sounds hokey but when you see it you’ll understand how brilliant and how heartbreaking the sequence is). Add to that bits of horror and cold war-era spy thrillers and you have a movie that could have easily been a mess but in the hands of a great director – and make no mistake, that is exactly what Del Toro is – becomes a tour de force, a masterpiece in shades of green and blue.

Hawkins is one of the frontrunners for an Oscar nod for Best Actress this year and with good reason. She has to perform almost entirely with body language and facial expressions. She wears her emotions plain to see throughout, engaging in an impromptu tap dance when she’s feeling playful, or resting her head against a bus window when she is contemplative. She hunches over as a person who doesn’t want to be noticed does, as someone who has been ridiculed and disregarded her entire life does. I don’t pretend to understand the Academy’s mindset but if it were me, I’d just hand Hawkins the statuette right now and save everyone the bother but that’s just me.

The fantastic supporting cast doesn’t let Hawkins down either. Jones gets a complicated and believable costume to create his character; Jenkins shows his most compassionate and frazzled sides as Eliza’s quirky and often incompetent friend. Spencer gets a role on par with her Oscar-winning performance in The Help and Stuhlbarg who has an Oscar nomination under his belt already takes a giant leap forward in proving that wasn’t a fluke.

The production design is near perfect. The lighting and color scheme emphasizes shimmering greens and blues, giving the entire film a kind of underwater look even when the action takes place above the surface. The industrial look of the lab has almost an art deco look to it; the space age sheen of futuristic buildings recalling the 1965 World’s Fair are absent here. This lab is a dreary place where people go to do repetitive, dehumanizing tasks and lose just a little bit more of their souls every time they clock in. I think we’ve all had jobs like that.

There is an awful lot of sexuality and nudity in the film as the romantic relationship between Eliza and the amphibian becomes physical. While it is handled in my opinion with dignity and restraint, some might find even the hinting of interspecies sex to be completely beyond the pale. I can understand that, truly, but it would be a shame to cheat yourself out of one of the year’s best movies – if not THE best – because of a little fantasy sex.

Some might find the ending hokey but I took a different tack with it. Jenkins delivers bookending voiceover narration at the beginning and end of the movie; my take is that we are seeing events as Giles imagined they occurred; what really happened once the amphibian exits from view is up to conjecture and Giles admits as much. I kind of hope that’s what “really” happened to although life rarely has that kind of grace. Thank goodness that filmmakers like Del Toro do.

REASONS TO GO: Hawkins has a very good shot at an Oscar nomination. The story is touching and beautifully told. This is a godsend for the discerning moviegoer. Great supporting performances all around and wonderful set design enhance the film.
REASONS TO STAY: The sexuality may be more than some can handle.
FAMILY VALUES: There is graphic sexuality and nudity as well as some profanity and violence.
TRIVIAL PURSUIT: Del Toro turned down Pacific Rim: Uprising to direct this.
CRITICAL MASS: As of 12/24/17: Rotten Tomatoes: 93% positive reviews. Metacritic: 86/100
COMPARISON SHOPPING: Lady in the Water
FINAL RATING: 10/10
NEXT: The Dark Tower