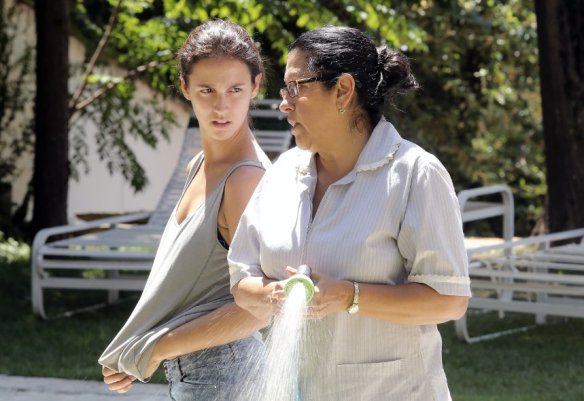 There are the servants and there are the served. The distinctions between the two have made up society throughout the planet essentially since humans started walking upright. Throughout history, there have been changes, perhaps never more than now but we all belong to one class or another.

Val (Casé) belongs to the latter caste. A domestic working in the home of Dr. Carlos (Mutarelli) – whose doctorate is never explained as we never see him working mainly because, we learn later, he inherited wealth – and his wife Barbara (Teles), she has also raised their son Fabinho (Joelsas) as if he were her own. She in fact has her own – a daughter – whom she hasn’t seen in ten years nor spoken to in three. Val lives in a tiny, cramped room but is content, with a fan, a TV set, a tiny bed and the family she serves nearby.

Then she gets a call from her daughter Jessica (Márdila) out of the blue. It turns out that Jessica is studying for the entrance exam at a prestigious university there in Sao Paolo. She asks Barbara if it would be all right if Jessica stayed with them while going through the application process and Barbara agrees, magnanimously insisting on buying a mattress that Jessica can sleep on while staying in Val’s cramped room.

Val, who is very conscious of her place and what is expected of her (after more than a decade of service to the same family, you’d expect that), is grateful for the kindness and is absolutely over the moon at the chance to spend some time with her daughter.

Jessica, for her part, has grown up with Val’s estranged husband and has a bit of a bone to pick with her mother who seems to have chosen the family that employs her over her own family. She also has no patience for social niceties, looking at Val’s attitudes as archaic and incomprehensible. For Val’s part, Jessica’s self-confidence that borders on arrogance is like a creature from another world. She doesn’t understand why Jessica can’t show deference to the people who pay for Val’s service.

Before long, Jessica has wheedled her way out of Val’s cramped quarters and into the more luxuriant guest bedroom suite and is eating at table with Dr. Carlos and his family, putting her mother in the humiliating position of serving her own daughter. Fabinho also clearly notices the new girl in the house as does, somewhat creepily, his dad.

Fabinho is closer in many ways to Val than to his own mother who is somewhat cold to him and doesn’t express her feelings to him as much as the more outgoing Val, and Barbara in turn is more than a little bothered that her son isn’t willing to hug her but freely gives hugs to Val. Still, Val is a part of the family and she’s willing to put up with a little bit of inconvenience for a short time…until Jessica’s attitudes begin to unravel the carefully woven fabric of the family’s relationship with Val – and each other.

Class distinction comedies are nothing new, nor are they limited to Latin America. This isn’t strictly speaking a comedy but it isn’t a drama by any means. Muylaert tries to keep things light as much as possible, although occasionally her point about class consciousness is made with leaden hands. What Muylaert excels at here is developing the various relationships in the film which drive it, from the distinct employer/employee relationship between Barbara and Val to the loving mother/son relationship between Val and Fabinho. American audiences may react differently to Val’s affections towards Fabinho but using domestics as nannies who actually end up spending more time with the children than their biological parents is not unusual in Latin America.

One of the things I really like about the movie is the relationship between Jessica and Val. The two couldn’t be more different; the mother is squat, self-effacing, and the antithesis of glamorous (unlike her employer who is an arbiter of style for Sao Paolo). Jessica is thin, pretty and something of a know-it-all. The two have had little connection over the years but both have a strong work ethic and as the movie unspools, they begin to develop an understanding and eventually a respect for each other. At the end of the day, Val is still Jessica’s mom and Jessica is still Val’s daughter and that forgives a lot of sins. Not all of them, but a lot.

One thing I wish the movie had explored more was the dynamic between Barbara, Fabinho and Val. There is certainly some tension there and it isn’t really explored; I’m guessing that Brazilian audiences are more used to the concept than American audiences so there is a bit of cinematic shorthand involved; it’s a given that these types of arrangements work out. I would have liked to have seen more of what the two women thought of the other’s relationship with Fabinho, but again, I imagine it is understood by locals. There is a nice moment between Fabinho and Barbara near the end; part of the overall sweet feeling of the film.

Critics have praised the movie pretty much universally (see scores below) but I have to say I’m a little bit less enthusiastic. It’s a good film to be sure and there are certainly a lot of undercurrents worth exploring, but they really don’t get explored much. At the end of the day, this is more like a soft drink than a Caipirinha. Lots of bubbles, lots of fizz but not as much substance perhaps as one might wish.

REASONS TO GO: Frothy. Captures mother-daughter relationship nicely. Tender-hearted.
REASONS TO STAY: A little creepy in places. Hits one over the head with its point. Could have developed Fabinho a bit better and especially his relationship with Val and Barbara.
FAMILY VALUES: A little bit of profanity and some brief drug use.
TRIVIAL PURSUIT: Brazil’s official submission for the 2016 Foreign Language Film Oscar.
BEYOND THE THEATER:  Amazon, iTunes, Vudu, Google Play, VOD (check your local provider)
CRITICAL MASS: As of 12/10/15: Rotten Tomatoes: 96% positive reviews. Metacritic: 82/100.
COMPARISON SHOPPING: Spanglish
FINAL RATING: 6/10
NEXT: A Very Murray Christmas

It’s no secret that motion pictures have become a veritable cornucopia of product placement. Actors guzzle down Coke, wear Nike t-shirts and Ray-Ban sunglasses, chew on Beemer’s gum, escape the bad guys in Mini-Coopers and snack on Reese’s Pieces with their favorite aliens. It’s a means of subtle advertisement for a variety of products who pay big money to place their products in prospective hit movies.

Movies aren’t the only place that advertising reaches us. It surrounds us nearly 24-7; on billboards, television shows, pop-ups on websites, garments, taxis, busses, skywriting – even on menus. We can’t turn around without our eyes resting on some sort of advertisement. It permeates our lives so thoroughly we barely realize it’s there anymore.

Morgan Spurlock still notices though. He came up with the concept of doing a documentary on advertising – entirely financed by product placement. He goes into meetings with executives for a variety of products, from JetBlue airlines to Mane and Tail animal care products to POM Wonderful pomegranate juice. He winds up filming some commercials for a few of them,  and actually winds up achieving his goal.

He also talks to luminaries like social commentator Noam Chomsky, consumer advocate Ralph Nader, filmmakers Brett Ratner, J.J. Abrams and Peter Berg and billionaire Donald Trump about the incessant and invasive nature of modern advertising. The talking head sequences are some of the most entertaining in the film, particularly those of Nader and Trump.

He also visits Sao Paolo in Brazil, a city which has banned all outdoor advertising. It is a stark reminder of just how much ads are a daily reality for all of us. The city looks almost naked without the billboards, signs, posters and handbills that are everywhere in the modern city.

Spurlock is a lot like Michael Moore in that he is not a documentarian who is content to stay behind the camera and allow the story to tell itself. Like Moore, he is always part of the story as he was in Super Size Me which is notable in that it was instrumental in getting McDonalds to discontinue Super-sized combo meals.

I don’t think he’ll have the same kind of affect here – there is nothing here that indicates that advertising is anything other than annoying. However, one is given pause for thought when he talks to administrators at a cash-strapped Florida school that has allowed advertising on its school grounds to help raise badly needed operational funds. You have to think that this might well be the wave of the future.

Even if he is a bit intrusive in his own documentary, Morgan is charming and pleasant enough an on-camera personality. Did his idea merit a full-length documentary feature? Probably not. However, I will give you that it at least gives one food for thought, even if it is just a Happy Meal.

WHY RENT THIS: Spurlock is always clever and funny.

WHY RENT SOMETHING ELSE: Not sure this was a great idea for a full length documentary.

FAMILY VALUES: There is some bad language and a little bit of sexual innuendo.

TRIVIAL PURSUIT: As a means of promoting the film, the city of Altoona, Pennsylvania change its name to POM Wonderful Presents the Greatest Movie Ever Sold, Pennsylvania for 60 days (beginning April 27, 2011). The town was paid $25,000 for doing the promotion.

NOTABLE DVD EXTRAS: All of the commercials Spurlock made for the various products are here in their entirety. There is also a feature on the film’s appearance at Sundance on the Blu-Ray edition.