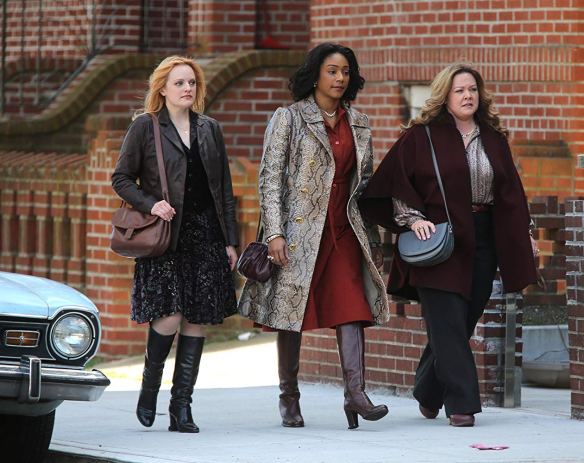 In Hell’s Kitchen in 1978, the wives of three low-level hoods in the Irish Mafia find themselves in dire financial straits when their husbands are sent to jail. Despite assurances by the mob that they’ll be taken care of, it turns out that it’s all just lip service. Desperate, the ladies take matters into their own hands and start running their husband’s rackets on their own.

See the trailer, video featurettes, a clip and an interview here
For more on the movie this is the website
Genre: Crime Drama
Now Playing: Wide Release
Rating: R (for violence, language throughout and some sexual content)

The Art of Racing in the Rain

See the trailer and video featurettes here
For more on the movie this is the website
Genre: Family
Now Playing: Wide Release
Rating: PG (for thematic material)

(Bleecker Street) Aldis Hodge, Greg Kinnear, Sherri Shepherd, Melanie Liburd. A young high school All-American football player is ready to take that first step towards turning pro when he enrolls at the University of Southern California but finds his plans derailed when he is accused, tried and convicted of a crime he didn’t commit. After years of trying to prove his innocence, he at last is successful and is determined to fulfill his interrupted dream of playing in the NFL.

See the trailer, video featurettes and clips here
For more on the movie this is the website
Genre: Sports Biography
Now Playing: Wide Release
Rating: PG-13 (for thematic content and related images, and for language)

Dora and the Lost City of Gold

(Paramount) Isabella Moner, Eugenio Derbez, Michael Pena, Eva Longoria. The beloved Nickelodeon animated show Dora the Explorer gets a live action treatment as high schooler Dora along with her faithful monkey companion and some of her pals from school go on a wild adventure in the jungles of South America to save her parents and solve the mystery behind a legendary city of gold.

See the trailer, video featurettes and a clip here
For more on the movie this is the website
Genre: Family Adventure
Now Playing: Wide Release
Rating: PG (for action and some impolite humor)

(Citadel) Lathrop Walker, Tabitha Bastien, Helena Grace Donald, Michael Winters. A former assassin, living quietly with his family away from his former life, finds his cover blown by his former employers. Now he must rely on his skills to protect his loved ones and hunt down those who betrayed him and in whom all his sins reside.

See the trailer here
For more on the movie this is the website
Genre: Suspense
Now Playing: Touchstar Southchase
Rating: NR

Scary Stories to Tell in the Dark

(CBS/Lionsgate) Zoe Margaret Colletti, Dean Norris, Gil Bellows, Michael Garza. A group of teens find a book of terrifying tales written by a young girl named Sarah whose terrible images turn out to be all too real.

See the trailer, video featurettes, a clip and a promo here
For more on the movie this is the website
Genre: Family Horror
Now Playing: Wide Release
Rating: PG-13 (for terror/violence, disturbing images, thematic elements, language including racial epithets, and brief sexual references)

(1091) Olivia Colman, Kathryn Dever, Walton Goggins, Jim Gaffigan. In this 2019 Florida Film Festival favorite, a young girl raised in a church that practices serpent handling, the pastor prepares for his daughter’s wedding, which unwittingly unleashes a secret that may change the girl’s perception of her father forever.

The Best Summer of My Life
The Bravest
Bring the Soul: The Musical
David Crosby: Remember My Name
Jabariya Jodi
Manmadhudu 2
Nekrotronic
Nerkonda Paarvai
The Quiet One