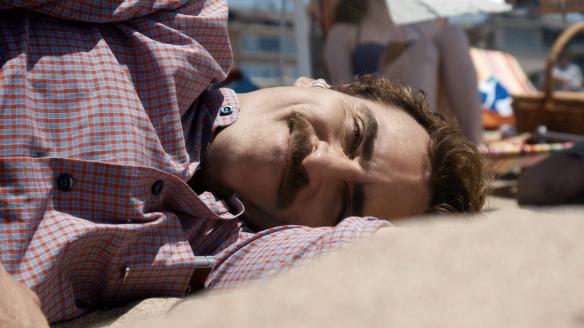 A selfie of a happy schlub.

There has been a revolution in personal communication. We now have more ways than ever to communicate with one another. Why then are we becoming less connected?

In the near future, a man named Theodore Twombly (Phoenix) – a name a screenwriter might have given a comic character in, say, 1926 – lives in a downtown high-rise. He once wrote for the L.A. Weekly but now works for a dot-com that offers the service of writing handwritten letters for those who don’t have the time or the gift to do it themselves. Theo’s letters are beautiful and emotionally expressive but for some reason he has trouble expressing his own emotions to those around him. His wife Catherine (Mara) has finally given up on Theo, and the two are divorcing for the most part acrimoniously although clearly Theo is still hung up on Catherine.

Smart phones have gotten smarter in the future and do more for us. Now there’s a new Operating System for our computers – one which is a true artificial intelligence, learning and growing as it becomes used to you and your needs. The voice of Theo’s calls herself Samantha (Johansson). At first, she’s a super-efficient personal assistant, making sure he makes his meetings and appointments, checking his e-mail and text messages for him and so forth. However, she has a curiosity about things and Theo is more than happy to help her out. Soon he feels a kind of connection to this disembodied voice and why shouldn’t he? She’s programmed to serve his needs.

But there are drawbacks to this new kind of love. There’s no physical body, no physical connection. Sure there’s cybersex but no touching. Surrogates (Doubleday) are tried but for Theo it doesn’t really work well. The relationship is largely inside his head and the physical presence is almost an intrusion. When he goes on a blind date with a particularly needy girl (Wilde) that doesn’t work either.

What kind of future do these relationships have, particularly when one party is growing – or perhaps more accurately evolving – at a significantly faster rate than the other? For the moment Theo doesn’t care – he is just learning to enjoy the moment thanks to Samantha.

The movie asks some really deep questions – what is love, and what does it mean to be human? Both of them are intrinsically tied up with one another. For those who might think it far-fetched to fall in love with a voice, consider this; many people have fallen in love with people they’ve only texted and chatted with on the Internet. Are their feelings any less valid because they haven’t had physical intimacy? Of course, the difference is that there’s a potential for physical intimacy whereas in Theo’s case there simply isn’t.

Phoenix is given maybe the toughest job an actor can get – take what is essentially an uninteresting guy and make him relatable to the audience. In that sense, his performance may not be getting any Oscar buzz but it may be as great a performance as those that are receiving it. Theo is the kind of guy we’d never spare a second glance at with his throwback mustache and excuse-me air.

Adams shows more vulnerability than I can recall in any of her performances. It’s a far cry from her role in American Hustle where she is outwardly tough and smart but inwardly has issues. Here her character has been sapped of strength and vitality by life; she is working on a documentary film that will serve as her dissertation but there’s no life to the project; it’s inert and boring and she knows it. She hasn’t given up exactly – she’s still a good friend to Theo – but this Amy has lost her way.

Jonze who has mostly made quirky pictures from the scripts of other people wrote this one himself and he throws all sorts of fine little details – for example, the future fashion isn’t having your pants down around your ass but instead up high and there are a lot of earth tones. There are no flying cars but there are high speed trains that take you just about anywhere. Even L.A.’s skyline resembles that of Shanghai (which is a bit of an inside joke since the Shanghai skyline was used in place of L.A.’s).

The question is here not just what humans are but what we are becoming. There is a bit of parable to the proceedings here. We have become obsessed with being connected but make no connections. How many times have you gone to a restaurant and seen everyone at the table texting away on their smart phones? Even when we’re together we aren’t present. Is that unhealthy or is it simply adapting to our new technology? I suspect that it’s a little bit of both.

Some movies tells us their views on the human condition and that alone gives us something to think about. Her is more about pointing out the direction we’re heading in and allowing you to draw your own conclusions. This is the kind of movie you’ll be turning over in your head and discussing with your friends for weeks after you leave the theater. I can’t think of higher praise than that.

REASONS TO GO: Examines what it is to be human. Thought-provoking. Believable future.

REASONS TO STAY: The emotional resonance may be too much for some.

FAMILY VALUES:  There are a few instances of rough language, some sexuality and brief graphic nudity.

TRIVIAL PURSUIT: Following the filming of some of the rougher emotional scenes, Amy Adams would sing songs from Broadway musicals to cheer herself back up. Phoenix soon began joining her but both stopped when they noticed Jonze filming their impromptu duets.

NEXT: Answers to Nothing