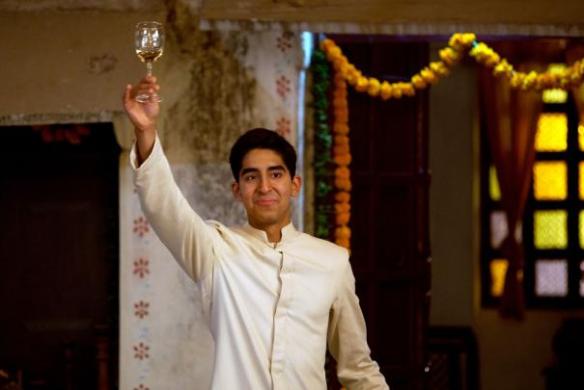 Dev Patel toasts his participation in an early favorite for the best movie of 2012.

Everybody ages. Not everybody gets to grow old and it’s for damn sure that not everybody grows as they age period.

A group of seven British retirees find themselves on a bus for the airport taking them to India. They’re not on a holiday or a tour – they are moving to the Best Exotic Marigold Hotel, a budget-priced retirement facility which claims in their advertisements that they have all the amenities needed so that they might spend their golden years in comfort and luxury.

Their interest is that the Hotel is inexpensive enough that they can all afford to live, as they all (with a couple of exceptions) have some sort of financial difficulty. Evelyn Greenslade (Dench) discovered when her husband passed away that he was deeply in debt and she was forced to sell her home in order to pay them off. Douglas (Nighy) and Jean (Wilton) Ainslie lost their life savings when their daughter’s internet company which they had invested in failed. Muriel Donnelly (Smith), a retired domestic, is going to India for a hip replacement surgery which is the only place where she can afford one. Madge Hardcastle (Imrie) is out to find herself a rich husband who can support her needs. Norman Cousins (Pickup), a ladies’ man, wants one last one-night-stand to tide him over. Finally Graham Dashwood (Wilkinson) who is a retired high court judge, grew up in India and seeks to find a lost love.

The hotel that they arrive at is far from what the advertisements claimed; it is ramshackle, without working phones and is old, decrepit and in need of much repair. Sonny (Patel), the manager, is highly enthusiastic and likable but lacks business know-how. He is desperately trying to get a local businessman to invest in the hotel in order to get it solvent; his mother (Dubey) wants him to come back to Delhi so that she can arrange a proper marriage for him. Sonny however only has eyes for Sunaina (Desae), a call center employee.

The new residents all react in different ways to their environments. Evelyn takes a job at the call center as a consultant to help the employees, including Sunaina whom she forms a friendship with, how to speak to elderly British sorts. She needs the work in order to afford to live at the hotel.

Graham disappears most of the day, rarely talking about where he’s been and what he’s done. He recommends places for the others to explore, which Douglas takes him up on. Jean prefers to stay in her room and read, complaining about everything and everyone. Muriel, whose racially insensitive views made some uncomfortable, begins to come around after her successful surgery and befriends a maid of the Untouchable class. When she gives her some advice on how to better sweep the pavement, the maid is very grateful, despite Muriel’s discomfort.

In fact, all of the residents are being profoundly touched by their surroundings and by each other. Some will find exactly what they’re looking for; others will be disappointed and others will be surprised. All will be confronted by their own mortality and their own shortcomings – and all will be changed by their experiences, and by India.

Madden, best known for directing Shakespeare in Love, assembled a tremendous cast and wisely lets each of them get their moment to shine. The movie is not so much about aging but about living – about never being too old to change and grow. It’s kind of a cross between Bollywood (without the songs and dance), Ealing Studios comedies, and On Golden Pond. While the movie certainly is aimed at an older audience, there is plenty in it for non-seniors to enjoy. It doesn’t hurt that the script (by Ol Parker) is well-written and full of some wonderful lines not to mention a great deal of wisdom.

Each character gets at least a few scenes to shine in; most remarkable are Dench, Wilkinson, Nighy, Smith and Wilton. Imrie and Pickup also fare well in their moments. Dench does a voiceover (which is the vocalization of the blog she’s writing) that is actually non-intrusive and well-written rather than a lot of Hollywood voice-overs which tend to be the writers showing off how well they can turn a phrase. Wilkinson and Nighy are two of the most consistent actors in Hollywood; Nighy often gets parts that are kind of far-out, but here his character is a decent man, worn down from years of living with a shrew. Wilkinson’s characters tend to run the gamut from amoral executives to care-worn fathers but here he is a lonely man, haunted by his past and the repercussions of his decision not to protest an obvious injustice. The inner decency of Graham shows through at every moment; he’s a judge that I would want hearing my case, a man who wins the respect of pretty much all of his compatriots.

This is a movie that you can fall in love with. It allows Indian culture to shine through without over-romanticizing it; you get the sense of the drawbacks of Indian culture as well (the congestion, the poor infrastructure and yes, the smell). However it counterbalances that nicely with the overall accepting nature of the Indian people, the beauty of the temples, palaces and countryside and yes, the people themselves – Patel and Desae make a magnificent couple.

I went in expecting to like this movie but not to love it but I wound up appreciating every moment of it. None of this rings false and to my way of thinking, you get to view the world through the eyes of people who have largely been discarded and marginalized by the world at large. Some of them do indulge in a heaping helping of self-pity but for the most part they find their niche in the world and inhabit it, much like anybody of any age. I know younger people might find the subject matter of seniors trying to fit into the world uninteresting to them but for those who don’t reject the subjects of India and the elderly out of hand, this is a movie you’ll find tremendously rewarding.

REASONS TO STAY: Younger people might find the pace boring and the subject uninteresting.

FAMILY VALUES: There are a few bad words scattered here and there, and some of the content is a bit sexual in nature.

TRIVIAL PURSUIT: The novel that Jean is reading is Tulip Fever by Deborah Moggach, who also wrote These Foolish Things on which this movie is based.

INDIA LOVERS: The area around Jaipur is shown with equal parts crumbling, decaying poverty and ancient beauty. The countryside is equally inviting and for those who haven’t considered visiting India, this acts as a pretty compelling reason to go.