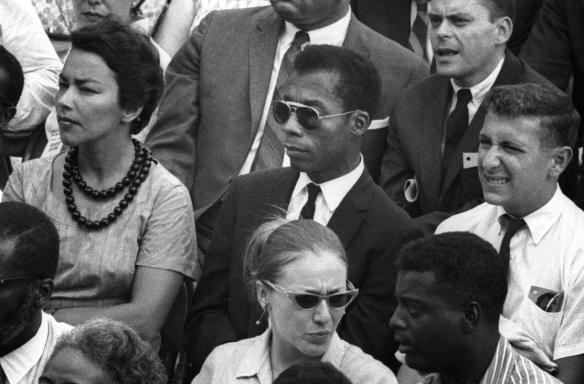 James Baldwin at one point says in this documentary “The story of America is the story of the Negro and it isn’t a pretty story.” For those who don’t know, James Baldwin was a gay African-American writer who during the Civil Rights era became a prominent and outspoken representative for civil rights. Articulate, intelligent and respected, his was a voice that was angry but one that invited dialogue. There isn’t much of that going on today.

In 1979 he author sent a letter to his literary agent Jay Acton outlining a proposal for a book project entitled Remember the House. In it he said that he wanted to examine the civil rights movement and America itself through the murders of three of his friends; Medgar Evers, Malcolm X and Martin Luther King. When Baldwin passed away in 1987 he’d completed only 30 pages of manuscript.

Documentary director Peck wondered what that book might have turned out to be. Using Baldwin’s own words from the Acton letter as well as the manuscript itself (all of which is read by Samuel L. Jackson), he uses archival footage of Baldwin doing talk shows, delivering speeches and lecturing at universities to flesh out the written words.

Peck also uses footage of modern race-related issues like the events in Ferguson, Missouri, the Black Lives Matter movement and the murder of Trayvon Martin to reinforce that the more that things change, the more they stay the same. Baldwin was one of the most brilliant men of the 20th century and he spent a significant portion of his life in self-exile in France, much like leading African-American artists did to escape American racism. That gave him a certain amount of perspective, but he also clearly loved his country and almost inevitably when he felt he needed to lend his voice to what was happening, he would return home.

His observations are eerily timeless, speaking as much to modern audiences as to those of the 50s and 60s. At times it seems he could be talking about incidents that occurred just last week. He speaks in a cultured, urbane voice – something else we’ve lost as a society – and reminds us that once upon a time we had discourse in America, not just attempts to shout each other down. One wonders what he would have thought of the current President and of how social media has changed our country and how we receive information.

This documentary brilliantly weaves the archival and modern images with Baldwin’s words, not only reminding us that he was a great man (which he was) but also that we haven’t learned very much from him. The Oscar-nominated documentary really has a single flaw but it’s kind of a big one; it tends to flog the same points over and over again, but then again perhaps we need that since as mentioned a moment ago we really haven’t learned our lesson yet. Hopefully seeing this documentary might motivate some of you to read some of his books (I know I’m going to be checking out Amazon for at least one or two) but also to remind us that while we have made some progress, we still have a hell of a long way to go.

REASONS TO GO: Powerful and depressing, the film shows us how little we’ve progressed in half a century. Some truly remarkable archival material brings the Civil Rights era to life.
REASONS TO STAY: An element of flogging the same points over and over again does occur.
FAMILY VALUES: Some of the images are violent and disturbing; there is also some profanity including racial slurs, adult themes and brief nudity.
TRIVIAL PURSUIT: The word “negro” is used 78 times in the film.
BEYOND THE THEATERS: Amazon, Vudu
CRITICAL MASS: As of 3/20/17: Rotten Tomatoes: 98% positive reviews. Metacritic: 96/100.
COMPARISON SHOPPING: Malcolm X
FINAL RATING: 7.5/10
NEXT: A Dog’s Purpose