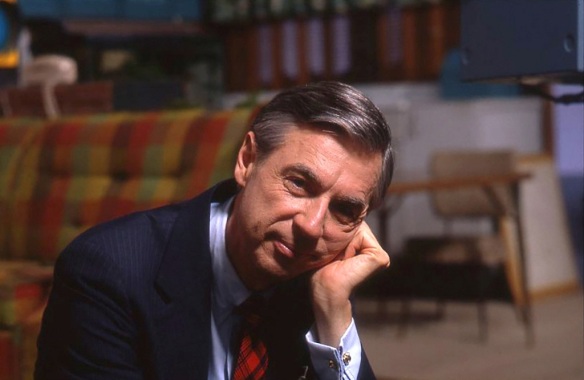 The world needs Fred Rogers more than ever.

Entire generations of kids grew up with Fred Rogers, whose PBS television show Mister Rogers’ Neighborhood was a mainstay in many households across the country. Rogers himself was an unlikely TV star; soft-spoken, a little bit corny and prone to using silence on his show to allow kids to digest things, he took the conventions of frenetic-paced kids television of the day (the same conventions that remain today) and turned them upside down and inside out. For this he became a beloved figure. Few celebrities have ever been able to relate as well to children as he.

An ordained minister, he eschewed the cloth to utilize the fairly new medium of television in order to spread his gospel of talking to children as equals rather than talking down to them, to listening to what they have to say instead of dismissing it out of hand. He wanted to teach children the virtues of kindness and generosity. He wanted them to know that every one of them are unique and special.

Of course, in later years Fox News seized on this and blamed Rogers for the entitlement of Millennials. As usual, Fox News got it wrong; what he was getting across was that every child is unique and has something different to offer. Some kids are fast runners, some great singers, others are just good at giving hugs. Everything is valid. Of course, Fox News and their ilk have succeeded in getting across that a person’s value can only be measured in dollars and cents. It’s that ridiculous and heartless idea that only people who are gainfully employed in “serious” jobs are successes in life.

The format of the documentary isn’t particularly earth-shattering; it’s essentially what most modern documentaries do; archival footage, talking head interviews and animated sequences (of Daniel Tiger in this case) mixed together. Neville, an Oscar winner for Twenty Feet from Stardom, mixes the elements together in a roughly chronological order and with a wealth of video from Rogers’ show as well as contemporary and archival interviews with Rogers, his family, his colleagues and noted celebrities like Yo-Yo Ma, bring together a picture of the man – who struggled with feelings of inadequacy his entire life – and of the impact of his show, which was clearly considerable.

Rogers helped teach children to deal with real issues, like divorce and death. His show following the assassination of Bobby Kennedy was perhaps his finest moment as kids learned from Daniel Tiger that it’s okay to be sad and to feel bad about someone being assassinated. While Rogers likely wouldn’t have voted for Kennedy (he was a lifelong Republican), he could at least cross party lines and help heal those hurting following a national tragedy. I wonder if any modern Republicans or Democrats could do that today.

In fact, given the recent news of children at the border being forcibly taken away from their parents, one wonders what Fred Rogers would have thought about that? I can only imagine but I have no doubt in my mind his soft voice would be among the loudest in demanding that the practice be discontinued immediately and that the children separated from their parents be returned to them without delay. His wife Joanne, talking about the political division that exists in this country nowadays, asserts that while Fred would have been disappointed in it, he would be at the same time on the front lines trying to heal those divisions rather than complaining about it. He certainly would not give up hope. To me, that’s why America needed Fred Rogers then and why we need him more than ever no and indeed, the world needs men like him always.

REASONS TO GO: This is the rare documentary that makes you feel good exiting the theater. It’s a very informative film about Fred Rogers and his TV show. The life lessons taught here continue to be valid.
REASONS TO STAY: The structure of the documentary isn’t particularly remarkable.
FAMILY VALUES: There is perfectly suitable for the entire family.
TRIVIAL PURSUIT: The various puppets used on the show were based on people Rogers knew or in the case of Daniel Tiger, on Rogers himself.
CRITICAL MASS: As of 6/19/18: Rotten Tomatoes: 99% positive reviews. Metacritic: 85/100.
COMPARISON SHOPPING: I Am Big Bird: The Carrol Spinney Story
FINAL RATING: 8.5/10
NEXT: Annihilation