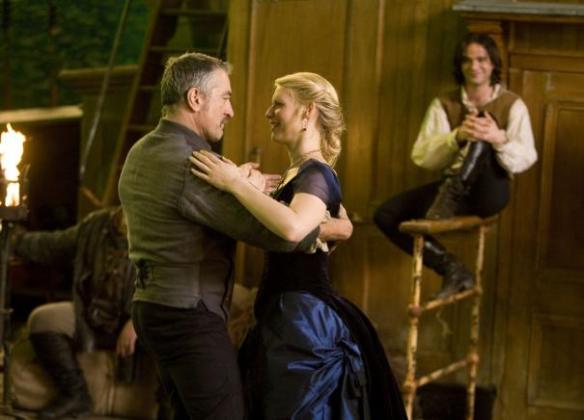 Danes and Cox are bemused by DeNiro's assertion that Martin Scorsese taught him how to waltz.

This arrives to us from the mind of Neil Gaiman, one of the most respected names in the Graphic Novel field today. The man who gave us such works as Sandman, Death: The High Cost of Living and Coraline also gave us this, his version of high fantasy.

The village of Wall in England is so-named because of a long wall running along the edge of the town. It seems like an ordinary wall, with a breach in it where the stones have collapsed over the year – it’s a very old wall, after all – with the town on one side and pleasant fields on the other. However, persistent town legend has it that crossing through the wall takes you to a place not known to man. The legend is so widespread that the town actually has a guard posted 24-7 at the breach, although few in Wall are so addled as to wish to see what lies on the other side.

One night, a young man does so and meets a girl, a beautiful girl who says she is a princess being held captive by a witch. The young man and the girl do what comes naturally to young men and girls and nine months later, the young man has a special delivery from the wall guard – a baby, who the young man is charged with raising.

Years later – 18 of them, to be exact – the baby has grown into a young man himself, a shop boy named Tristan (Cox). He is deeply besotted by Victoria (Miller), a town beauty who is very rich and being wooed by equally rich (and equally shallow) Humphrey (Cavill). However, she finds a soft spot for the lovestruck Tristan and agrees to go on a late night picnic with him. Tristan is devastated by the news that Humphrey has gone to Ipswich to buy an engagement ring which he intends to present to Victoria at her birthday party a week hence. She intends to say yes to Humphrey.

Just then they are interrupted by the descent of a falling star. In a moment of romantic passion, Tristan promises to retrieve the star for Victoria. She agrees if Tristan can do this, she will be his. In the meantime, the star has landed and it’s not a piece of rock or a chunk of metal. It is, in fact, a beautiful girl (Danes) who goes by the name of Yvaine. Her arrival has signaled a time of great changes in the land – not England, for the Wall is in fact a magic dividing point that separates the land of reason (England) from the land of magic (Stormhold). The King of Stormhold (O’Toole) is dying, and as is customary in that autocratic land, the crown princes are murdering one other in order to be the last prince standing in line for the throne.  It turns out that since four…er,  three princes remain and the King doesn’t have time to wait for the others to go about finishing the others off, he sets a challenge – the prince who can retrieve an amulet and restore the color to the ruby within it will be King. The trouble is that the ruby is around the neck of Yvaine.

There is also a wicked witch named Lamia (Pfeiffer) who knows that the heart of the star bestows youth and beauty on those who know how to use it. For her and her sisters, it is absolutely vital that they retrieve this star since their last one is almost gone and the old girls are beginning to show their age.

Everybody is after the star, but it is Tristan who finds her first. He promises to help her return home to the heavens once he’s presented her to his true love, so Yvaine – who doesn’t like this overly earnest and awkward young man – begrudgingly agrees. This sets in motion a series of perils, pirates (led by the able Captain Shakespeare, played with panache by De Niro) and all manner of really bad people.

This is a movie of charm and wit. There are some great moments and a few real good laughs, but there are some moments of poignancy and real insight as well. Director Vaughn, best-known for Layer Cake, balances all of the elements very nicely. Yes, it’s definitely a fantasy but there isn’t an over-reliance on special effects. Sure, there are some breathtaking moments like the Sky Pirate Ship landing on the water, or a duel between Tristan and Lamia, but the appeal here is in a lovely simple story and some solid acting.

Cox is very likable in his role, and De Niro is obviously having a good time in his role as the pirate captain with a reputation to uphold, but it is Pfeiffer who in all ways is the real reason to go see this movie. She makes a really terrific villain (as those who’ve seen her in Hairspray can attest) and isn’t afraid to have a ton of make-up and prosthetics applied to artificially age her, despite being one of the most beautiful women in the world (still). She plays the part with supreme self-confidence and unleashes one of her best performances in years. It’s a surprisingly demanding role and one critical to the movie’s success, but Pfeiffer pulls it off admirably. This may not be necessarily Oscar material, but it’s the kind of work that gets the kind of work that a good actress wants to do for her.

I was enchanted with Stardust from the very first moment when McKellan’s stentorian narration begins. The world here is richly detailed, which is I think one of the great selling points to most fantasy readers, in the same way that Tolkein’s Middle-Earth is, or Lewis’ Narnia. Stormhold is a world that is lived in and watching this you naturally want to live in it too. I highly recommend Stardust for anyone who loves fantasy movies, fairy tales, adventure stories or romances – and especially for those who love all of the above.

WHY RENT THIS: Charming and witty. Lovely performances, particularly from Pfeiffer. A fully realized fantasy world that you want to live in.

WHY RENT SOMETHING ELSE: Drags a bit in the middle. Some of the plot points are a bit worn thin.

FAMILY VALUES: There’s some minor violence and sexuality but nothing not suitable for kids.