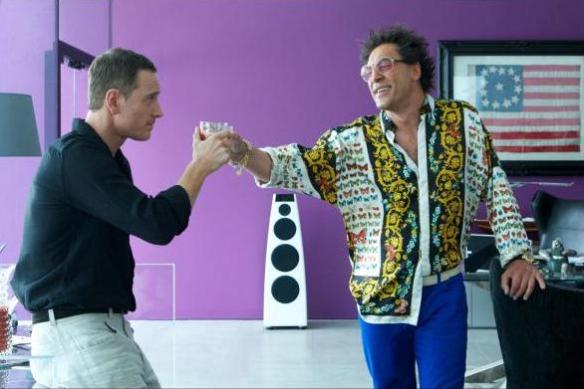 Michael Fassbender doesn’t know what to say when Javier Bardem insists on toasting their barbers.

When we choose to abandon the straight and narrow, we do so most often because of greed. We want more than we would otherwise be entitled to by the dint of our hard work and effort, so we take the shortcut. Sometimes we escape with a tidy sum to put by for a rainy day but more often than not, we reap the consequences of what we have sewn.

The counselor (Fassbender) – he is never given a name in the film – is a sharp lawyer who must have been absent the day they were handing out a conscience. He’s all about the Benjamins, although he is madly in love with Laura (Cruz) whom he has proposed to. While his practice is making him a decent amount of money, he is raking in the cash like he’s printing it thanks to his relationship with Reiner (Bardem) who is part of the Mexican cartel, and middleman Westray (Pitt) who brokers the deals.

Reiner is arranging for the shipment of some drugs from Mexico to Chicago in a septic truck. Being the paranoid sorts that they are, the truck is only going to go as far as Arizona before finishing it’s journey. The Mexican nationals driving the truck get it to its destination, then a courier is supposed to take a kill switch needed to start the truck to the next driver who will finish the job.

Reiner, Westray and the lawyer are all at risk as are their immediate loved ones which in Reiner’s case is the ice-cold financier Malkina (Diaz) and in Westray’s case is nobody. Malkina, who has a soft spot for watching jaguars take down jackrabbits in the desert and knows more about what’s going on than Reiner or the counselor suspect, promises Reiner that she is going to leave at the first sign of trouble but in point of fact she’s long gone well before that.

As you would expect from a screenplay written by Cormac McCarthy, the plot is very complex and requires a good deal of attention on the audience’s part, particularly during the first few scenes of the movie where those paying close attention can pretty much garner everything they need to figure things out.

The cast is impressive as you might expect with all the A-list power behind the camera. Fassbender is a busy man these days but makes time for a role which is as much of a cipher as any he has played to date. Not only is his character given no name, he isn’t given much of a soul either. That seems to reside all in Cruz who is unaware of the depths of the double dealing her groom-to-be is sinking to.

Bardem, as always, is interesting whether he is shamelessly hamming it up (as he is here) or underplaying discretely (as he does in Skyfall). As you can see in the photo above, there is nothing subtle about Reiner and for that kind of role, Bardem is a good first choice (or fallback as the case may be). Pitt is serviceable as the wise and worldly Westray who understands exactly what sort of people they are up against.

I’ve never been particularly a Cameron Diaz fan but this might be my favorite performance of hers to date. Malkina is a manipulative predator, weaving a web of lust and betrayal and then striking as true and as deadly as a cobra. It is one of the best female villain roles since Cruella de Ville – while Charlize Theron as Aileen Wuornos in Monster did show someone who was evil, you can’t really call truly call the role that of a villain.

The movie is pretty convoluted in places and there are a lot of characters who show up, say a few lines and then disappear for good. Perhaps the audience might have appreciated combining some of these roles or at least having other characters mouth the platitudes. The bean-counters would have appreciated it as well.

McCarthy is never a particularly easy read and this screenplay, an original story by the Pulitzer Prize-winning author, isn’t always easy to watch. The sex is in your face (quite literally at times) and those who are uncomfortable with sexuality will certainly be disturbed by what they see here. There are some pretty violent moments as well with at least one beheading and a lot of bodies being shot to pieces. Those sensitive to those sorts of things should take note too.

Still, this is a solid thriller that is a little smarter than most and a bit better-written as well. It is a grim movie that just gets bleaker as the film goes on and as the Counselor and his allies realize that they are trapped in a situation that there is no escaping, try as they might. This may not end up in anyone’s top 5 Ridley Scott movie lists but it should certainly make his top ten.

REASONS TO STAY: Convoluted and hard to follow in places. Unrelentingly grim.

FAMILY VALUES:  There is some fairly graphic violence and language, along with a few morbid images and a fairly extensive and graphic amount of sex and conversations about the same.

TRIVIAL PURSUIT: Production shut down for a week in August 2012 after the suicide of director Ridley Scott’s brother Tony, who was also a co-founder of their production company Scott Free. The movie is dedicated to him.