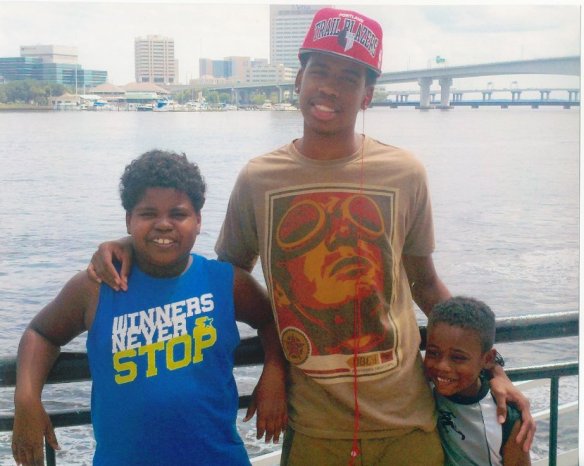 How many more lives must be lost before we learn to live with one another?

In Jacksonville, Florida on November 23, 2012 – ironically, Black Friday, the day after Thanksgiving – four young African-American boys pulled into a gas station to pick up some sundries at the convenience store on the premises. They’d just come from the local mall where Jordan Davis’ girlfriend worked and had plans to enjoy the rest of the holiday weekend. Like young men of any color often do, they had the music on way too loud. The driver, Tommie Stornes, went inside to make his purchases.

Into the spot next to them pulled in Michael D. Dunn and his girlfriend Rhonda Rouer. They had just come from his son’s wedding and had enjoyed several cocktails; they were looking forward to continuing the party in their hotel room before driving home to Brevard County. While Rouer went inside to buy wine and chips, Dunn asked the boys to turn the music down.

Initially Tevin Thompson complied but this apparently upset Davis who turned the music back on, exclaiming that he didn’t want anyone telling him what to do. This led to a verbal confrontation between Davis and Dunn. According to Dunn, Davis threatened to kill him and when Dunn saw the boy pull a shotgun out and point it at him, he pulled his own gun from the glove compartment and fired into the vehicle. Stornes, who had returned to the vehicle by this time, pulled out of the parking space and Dunn left the vehicle, continuing to fire – ten shots in all. Rouer returned to the parking lot shortly after, and Dunn calmly left, returned to his hotel room and ordered pizza.

Three of the shots had hit Davis however, and when Stornes stopped the car a short distance away, they noticed Davis gasping for air. He’d been struck in the leg, the lungs and in the aorta. They made a frantic 911 call but it was too late. Davis would die from his injuries. Dunn never called the police, never took any responsibility for his actions. He was arrested later because an eyewitness got the license plate number from his car. Police searched the boys’ vehicle and no weapon of any kind was found.

This powerful documentary doesn’t really concentrate much on the actual shooting, although there is a poignant sequence in which the last moments of Davis’ life are described while home video footage of him as a baby is displayed on the screen. Mostly, this is about the aftermath – the devastation on his parents, Ron Davis and Lucia McBath (they had separated when Jordan was young and his mom had since remarried), his friends and his girlfriend.

They cover the trial, following the awful ordeal of reliving the death of their son, the demonizing of the four boys that the defense used to try and apply Florida’s controversial “Stand Your Ground” law. The movie is an indictment of that law as well as the mentality surrounding it. A mentality that has led to open season on young black men, that has led to massive racial tensions in a country that is supposed to be far too enlightened for them.

It’s hard to watch this movie and not feel angry. The pain and suffering of Jordan Davis’ parents and friends is palpable. The arrogance and self-delusion of Dunn is chilling. And even as his parents were dealing with the trial of their son’s murderer, off-camera other African-American boys were getting shot down. Given the circumstances that America has found itself in over the past year and a half, it’s hard not to put this film in that context.

However, that context has to be done by the viewer; the filmmakers make little note of them, although surely they had to be aware of what was happening elsewhere. While the movie overall is incredibly moving and emotionally wrenching, one thing was missing: Jordan Davis. We never really got a sense of who this 17-year-old young man was, or what his plans for the future were other than they probably didn’t include the NBA (his friends joke regularly about what a lousy basketball player he was). At the Q&A following the Florida Film Festival screening of the film (one of the best I’ve ever attended, by the way), his father described him as hoping to enlist in the U.S. Marine Corps after he graduated. He wanted to serve his country. Sadly, he never got the chance. In any case, I would have liked to have seen more of Jordan in his own story. He was more than just his murder and I think the movie would have been even more effective had we gotten to know him a little bit better.

This is the kind of tragedy that is far too common in our society. It is a senseless waste of human life. These four boys weren’t ghetto kids; they were from middle class families and had never been in trouble with the law. Even if they had been from a poor neighborhood, that still didn’t warrant what happened to them. Davis might have lost his temper and said some intemperate things, but that wasn’t worthy of a death sentence.

I don’t know that Dunn would have reacted differently had not the Stand Your Ground law been in effect. I think it’s impossible to know whether he would have or not. Chances are, the law wasn’t on his mind when he drew his weapon. What  was on his mind was anger and fear. Anger that these boys stood up to him; perhaps fear that they were guilty of being young and black. Which in his mind, did carry a death sentence.

REASONS TO GO: Absolutely riveting.  Couldn’t be more timely. Nonpartisan.
REASONS TO STAY: Could have explored the underlying issues more thoroughly. Would have liked to have known more about the victim.
FAMILY VALUES: Adult themes. Some disturbing content.
TRIVIAL PURSUIT: Made its debut at this year’s Sundance Film Festival. It was initially titled 3 1/2 Minutes but has since added the 10 Bullets to the title.
CRITICAL MASS: As of 5/20/15: Rotten Tomatoes: no score yet. Metacritic: no score yet.
COMPARISON SHOPPING: 15 to Life: Kenneth’s Story
FINAL RATING: 8.5/10
NEXT: Billy Mize and the Bakersfield Sound