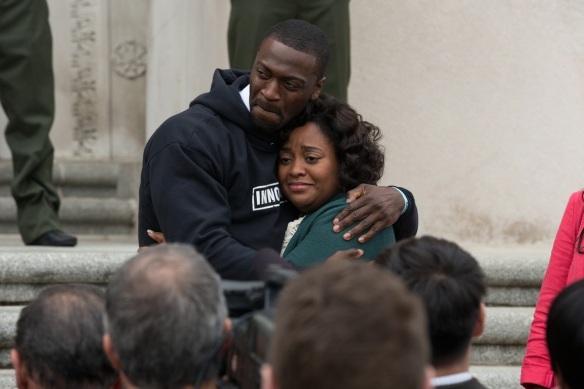 There is little doubt that the American legal system is seriously broken. Justice seems to be the sole province of the wealthy and the white. Standards of proof seem to fluctuate depending on the color of one’s skin and the gender of the accuser.

Brian Banks (Hodge) is a 16-year-old kid with an incredible future before him. A star linebacker at Long Beach Poly high school, one of the premier high school football programs in the entire country, he has already been accepted to the University of Southern California and seems guaranteed to be on the fast track to NFL stardom.

That rosy future is interrupted by an accusation of kidnapping and rape by a fellow Poly student (Roquemore). Banks is arrested and indicted, then his ineffective lawyer convinces him to accept a plea agreement that turns out to be a raw deal for Banks, sending him to prison for five years which would be followed by probation for an additional five years – plus being labeled a sex offender for the rest of his life. Sounds pretty much like justice except for one thing; the rape never happened.

Banks struggles to prove his innocence, reaching out to Justin Barber (Kinnear), founder of the California Innocence Project who gently informs Banks that because he entered a no contest plea, the only way to get his conviction reversed is literally for his victim to recant her testimony.

Amazingly, Banks perseveres even though he is as much a prisoner on the outside as he was in prison. Nobody will hire a convicted sex offender and Banks isn’t allowed within a certain distance of public parks and schools. Every time it seems like Banks finds a ray of hope, some tough-on-crime politician rams through legislation that slams the door shut.

This is meant to be an uplifting, inspirational film about the power of perseverance and believing in one’s self and one’s dreams. Hodge delivers a star-making performance that carries the picture, holding his own nicely against stellar actors like Kinnear and Freeman (who plays a prison teacher whose platitudes help Banks find inner peace). While the true story is compelling enough, it is Hodge that most people will remember best after seeing this film.

Definitely the movie makes some commentary on the gulf in the justice system that exists between black and white. Had Banks been a white athlete, it’s likely that the accuser would not have been believed and even if the case went to trial, the perpetrator would have gotten a slap on the wrist if he did any time at all. Boys will be boys, but African-American boys will be criminals – at least that’s how our legal system apparently sees things.

In the #MeToo era there is a bit of tone deafness about this project. False rape accusations are relatively rare and more often than not, accusers are treated with disbelief and scorn, often being blamed for their own assault. Even though this is a true story, it’s not a typical one and the movie really doesn’t address that.

REASONS TO SEE: Hodge delivers the performance of his career.
REASONS TO AVOID: The script gets a bit soapy in places.
FAMILY VALUES: There’s a certain amount of profanity, as well as some adult thematic content and accompanying images.
TRIVIAL PURSUIT: At least eight of Banks’ teammates on the Long Beach Poly team eventually played professional football either for the NFL or overseas.
CRITICAL MASS: As of 8/28/19: Rotten Tomatoes: 58% positive reviews: Metacritic: 58/100.
COMPARISON SHOPPING: A Time to Kill
FINAL RATING: 6/10
NEXT: Seaside