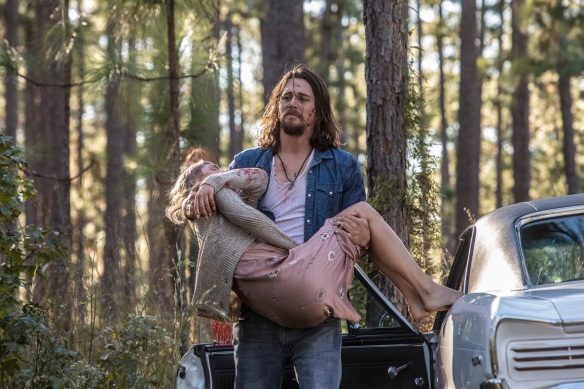 Carrying her across a different threshold.

The backwoods hide its share of secrets. Sometimes, when the wind is blowing just right you can swear you hear the trees whispering about dark deeds done in the dead of night, of murder, mayhem and cheating hearts.

Ray Young (Robson) is one of those country boys whom trouble just seems to follow. He’s a man who likes to drink and has a hair-trigger temper, not a great combination. He’s done some jail time for petty crime and makes up “the usual suspect” in the small Missouri town he lives in. His younger brother Norman (Thwaites) couldn’t be more different; a straight-arrow deputy sheriff who is painfully naive, romantically awkward and a bit exasperated by his hot mess of a brother.

Ray is on-again off-again dating Abby (Holt) who is a single mom whose baby daddy is Cinch (Malarkey), a construction worker built in Ray’s mold – this girl sure can pick them. Her younger sister Frances (Debnam-Carey) is quiet, upstanding and of course the object of Norman’s affection, although much of what she jokes about goes sailing over his head. Abby and Frances live at their childhood home where they take care of seriously ill patriarch Tom (McRaney) who trundles an oxygen tank wherever he goes but is not above roaring his disapproval over one thing or another at the sisters, particularly when Frances has the temerity to take away his smokes.

After the four young people go out for a night of drinking an dancing at a roadhouse charmingly known as The Whispering Pig, Ray predictably makes out with a barmaid (Eastwood) and gets into a fight that Norman has to come to his aid for. Furious, a drunk Abby gets into her car and peels out of the parking lot, leaving the other three behind.

The next day a badly hungover Abby takes her dad’s pistol and lambastes an equally hungover Ray, nagging him to teach her how to shoot which he is reluctant to do. The two drive into the woods where a terrible accident occurs. Ray panics and calls his brother to help him cover up his involvement. In a moment of weakness, Norman agrees to.

The town sheriff (Levine) is a pretty smart cookie and he begins piecing together the crime from the few clues that have remained. Norman, as a cop, knows how to stage a crime scene and manipulate an investigation. While the Sheriff (and a few other people) are certain that Ray had a hand in what happened to Abby, nobody suspects Norman. As time goes by and the trail goes cold the romance between Norman and Frances begins to heat up. However, the guilt both brothers are feeling begins to bubble to the surface and threatens to expose what they’ve both done.

The brothers Goetz seem to be waffling between Southern Gothic and neo-noir when it comes to tone and ends up being neither. For some odd reason, they decided to set the film in Missouri but filmed in Louisiana an it looks like Louisiana – why not just set it where you filmed it? Nobody cares overly much. Secondly, most of the main cast (with the exception of Levine and McRaney) are British or Australian. Not that the cast members (mostly of basic cable and TV pedigree) from across the various ponds can’t handle these very American art forms, but it just seems a curious thing hauling them all the way to the backwoods of Louisiana.

Actually, the cast is pretty decent although it is the veterans McRaney and Levine who steal the show. Robson and Thwaites capture a brotherly dynamic that feels authentic; having directors who are themselves brothers probably has a lot to do with it. The movie is reasonably suspenseful as the brothers come closer to cracking, although the “twist” ending feels forced and much of the movie loses its punch because of the melodrama that tinges the entire production.

There are moments of cinematic beauty which are provided by cinematographer Sean O’Dea; however, Evan Goldman’s score is intrusive and a little bit annoying. Overall this isn’t all that bad but there aren’t enough good things about it that really make it stand out among all the other movies that are out there at the moment. Fans of the various shows the young actors are in might get a kick out of seeing them in very different roles than they’re used to but otherwise, this one’s pretty much a toss-up.

REASONS TO SEE: The cinematography has some lovely heartland images.
REASONS TO AVOID: Really doesn’t add anything to the genre.
FAMILY VALUES: There’s a fair amount of profanity, some violence and a couple of disturbing images.
TRIVIAL PURSUIT: Peter Michael Goetz, who plays Riley Jenkins, is the father of the directors.
CRITICAL MASS: As of 5/20/19: Rotten Tomatoes: 11% positive reviews: Metacritic: 28/100.
COMPARISON SHOPPING: Murder by Numbers
FINAL RATING: 6/10
NEXT: Aniara