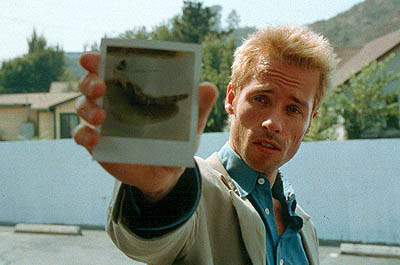 Do be wary when Guy Pearce wants to show you his vacation snapshots.

There is a yardstick I use with thrillers. The simpler they are, the better they work, but when it comes to plot twists, the bigger, the better.

Memento, directed by then-newcomer Christopher Nolan (who got  a lot of messages on his answering machines from major studios after this nifty little piece came out) has a plot device stunning in its simplicity. Leonard Shelby (Pearce) is unable to make new memories. He forgets where he is, what he’s doing, even what he just said a few minutes ago. It just fades away, like an Etch-a-Sketch on a pressure cooker.

However, his long-term memories are intact. He knows that in his previous life, he was a successful insurance investigator. He also knows that his wife was raped and murdered by someone he knows only as “John G.” However, in the attack on his wife, Leonard was smacked hard enough on the head to give him brain damage.

Leonard was able to shoot and kill the assailant of his wife. However, his injury happened after the shot was fired; therefore, there was a second person involved in the attack. However, the police don’t believe a brain-damaged man, and don’t think John G., whoever he was, was clever enough to erase all traces of his presence. Leonard uses his organizational skills honed from his years as an insurance fraud investigator which he has somehow retained, making notes to himself, taking Polaroids of those he is associating with, and tattooing particularly vital bits of information on his body so that unlike written notes, they can’t get lost or misplaced.

So Leonard is searching, but in a particularly smart bit of moviemaking, the story is told backwards, following Leonard’s torturous trek. He is assisted by Teddy (Pantoliano) and Natalie (Moss), two people who may or may not be trustworthy. As the story unfolds, we become as Leonard, lacking in critical information that explains the motivations of the characters involved but as the movie progresses, we see what happened in the past which explains what happened previously. Think of the film as 113 minute-long flashback. This movie would never work as well with a traditional linear storyline. It’s a gutsy move by Nolan, and it pays off.

I’m deliberately keeping plot details to a minimum. Because of the nature of the story, it’s best not to reveal too much. This is one of the smartest movies I’ve ever seen; it requires the viewer to pay attention, and it requires the viewer to think. In other words, if you’re looking for brainless summer fare, it’s best to keep moving down the list of rentals and/or streaming movies.

Pearce gives a low-key performance as Leonard. Up to that point he hadn’t really followed up his jaw-grinding performance in L.A. Confidential with anything noteworthy (don’t get me started on Ravenous or his phoned-in work on Rules of Engagement), finally makes a movie worthy of his talents. Moss, so memorable in The Matrix trilogy, is terrific again here in a role very different from Trinity.

Nolan is someone to keep an eye on. In many ways, this movie has the same kind of risk-taking that M. Night Shyalaman showed in The Sixth Sense. It’s that good, certainly one that will be appearing on a lot of year-end best lists. The final twist at the end is not the kind that will blow you right out of your seat, but it elegantly fits in with the various twists and turns the story has been taking throughout. If Alfred Hitchcock were alive today, this is the kind of movie he would be making. Higher praise for a movie I cannot sing.

WHY RENT SOMETHING ELSE: Plot is a bit pedestrian and final twist isn’t particularly mind-blowing.

FAMILY MATTERS: There are plenty of bad words, a heaping helping of violence, a rape (although not graphically portrayed) and a brief scene of drug use.

BOX OFFICE PERFORMANCE: $37.9M on a $9M production budget; the movie was a modest hit.

Dude! Have you seen Nemo?

You might think that being a clownfish is all fun and games, but it’s a dangerous ocean out there. Just ask Marlin (Brooks). He had it all — a beautiful home with a view, a loving wife, and a brood of kids on the way.

However, a chance predator takes out nearly everything, leaving Marlin with just one son, Nemo (Gould), and Marlin swears that nothing will happen to Nemo as long as daddy is around.

Time passes, and it’s time for little Nemo to head out to school. However, his overprotective dad has Nemo seeing red, and so the little fish with the half-formed fin ventures out farther than he should — and is caught by a dentist looking for a new addition to his tropical fish collection.

Doggedly, Marlin sets out to bring his boy home. He is aided by Dory (DeGeneres), a loopy bluefish with short-term memory loss that occasionally jeopardizes Marlin’s mission. But the plucky Dory sticks with him, and turns out to be a valuable ally, even with her problems remembering what happened just a few minutes before.

Meanwhile, Nemo is attempting an escape of his own, aided by several denizens of the fish tank, notably the only one among them who had actually lived out in the open ocean, Gill (Willem Dafoe). Marlin must navigate through the ocean’s natural dangers, ranging from a minefield of beautiful (but deadly) jellyfish, to a trio of sharks undergoing a twelve-step program to become, well, friendlier to fish.

The environment created by Pixar is even more enchanting than the undersea world of Disney’s other waterlogged animations, The Little Mermaid and Atlantis, mainly because it seems more real. The sequence with the current-surfing turtles is one of the best Pixar has ever come up with. In many ways, this is the most Disney-esque of the animated features Pixar has done, which, considering that director Andrew Stanton was responsible for A Bug’s Life – quite frankly the weakest Pixar movie to date – is not surprising.

Although Finding Nemo has gotten universally excellent reviews (including from my spouse Da Queen, who quite firmly stated that this is an Animation classic), I found it to be less engaging than the great majority of their films. While I can understand the popularity of the movie (and like DeGeneres, wonder when the inevitable sequel is coming), I just didn’t connect with it.

Albert Brooks has always struck me as kind of a poor man’s Woody Allen (making him, I suppose, a rich man’s Richard Lewis), somewhat neurotic and pessimistic, which suits Marlin well enough, but can get on the nerves over the course of 101 minutes. Dory is the best-drawn (excuse the pun) of the characters here; she is certainly handicapped by her memory problems, but never allows it to get her down. She turns out to be a loyal friend, something Marlin desperately needs.

Don’t get me wrong; the kids are going to love this, and adults will find some of it spectacular at times. Like nearly every Pixar movie, this one has enough subtext (particularly in the humor) to keep the attention of the big kids, and enough eye candy to keep the attention of the smaller kids. It was one of the big winners in the 2003 box office derby, and a big shot-in-the-arm for Disney’s flagging animated feature fortunes (particularly after the dismal performance of Treasure Planet). Pixar next released The Incredibles which even now is my favorite Pixar film ever, superhero geek that I am. You have every reason to see this movie, but be warned that at least for my part, I had a difficult time loving this as much as I have other Pixar movies. Perhaps therein lies my own problem – my expectations. You may want to go into this without any. You may enjoy it more than I did.

If you have kids, expect this to be a staple in your video library – if it isn’t now, there’s a good chance it will be at some point. No kids? You’ll still want to see some of the spectacular underwater scenes anyway and you’ll appreciate DeGeneres’ kooky performance.

WHY RENT THIS: Gorgeous backgrounds and authentic undersea settings. DeGeneres makes Dory one of Pixar’s most memorable characters. Crush and the turtles make one of the most breathtaking segments Pixar’s ever done.

WHY RENT SOMETHING ELSE: Marlin is a bit too neurotic to be an enjoyable lead. Is less compelling than other Pixar classics.

FAMILY MATTERS: Are you kidding? This is Disney…of course it’s perfectly suitable for the entire family!

TRIVIAL PURSUITS: The waiting room in the dentist’s office was modeled after one near the Pixar studios in Emeryville, California.

NOTABLE DVD FEATURES: The special edition DVD, like most Disney home video, is loaded with special features including the animated short Knick Knack which played in the theaters alongside Finding Nemo. There’s also an interactive game, a studio tour of Pixar Studios and a hilarious featurette called “Exploring the Reef” hosted by Jean-Michel Cousteau which purports to be a serious feature about the Great Barrier Reef but Cousteau constantly gets interrupted by characters from the movie.

BOX OFFICE PERFORMANCE: $867.9M on a $94M production budget; the movie was a blockbuster in every sense of the word.

TOMORROW: We Bought a Zoo