One look at Tracy’s face reminds us that farm life isn’t an easy life.

It is a fact that America’s heartland isn’t terribly well-served by Hollywood. Often those who live in Middle America, those that grow our food are portrayed as bumpkins, buffoons or obsessive. Those who have religion are ridiculed; even those who don’t are made to look like stubborn coots hanging on to a way of life that is dying. Thus is the state of the family farmer in the second decade of the 21st century.

Jesse (Kinney) and his adopted sister Tracy (Ryan) are burying their father, recently deceased from stomach cancer, in the field where he toiled for fifty years. Primarily a tobacco farmer, he also grew corn and sorghum. Now his children are struggling to figure out what the hell to do next.

That question is set aside when they find three elderly men camping in their fields in a tent. It turns out that the three men – Hans (Gail), Charles (Coulter) and Tom (Guinan) – are brothers and they have a connection to the farm; they lived on it before Tracy was born. It belonged to their father and he sold it to their recently deceased dad – “Missed him by a week,” the pragmatic Tom says disconsolately.

Jesse, a man of faith, found religion when his life was absolutely destroyed by a tragedy. He believes the arrival of the brothers is a sign, an opportunity to right a wrong. Jesse wants to give them the farm, which his father used the brothers’ dad’s misfortune to his own advantage to purchase. The brothers are aging and Tom, who recently suffered a stroke, is in failing health. He also has a habit of saying course sexual remarks to Tracy, who bears them with the grace of a polar bear. Tracy is adamant; this is her farm as much as it is Jesse’s and the two argue incessantly about it.

Charles has become just a little sweet on Tracy which has been noticed by everyone except for maybe Tracy herself. The brothers are interested in buying the land; Tom wants to be buried there when it’s his time to go; the three live in Orlando and they certainly don’t want to be buried there where they feel no connection other than to a ratty old couch. The land – now that’s something else. Even though they haven’t been back in 50 years, it’s still home. It still calls to them.

As I mentioned, the people portrayed here represent a segment of the American public that has been underserved by Hollywood and in many ways, looked down upon by the elites of the Atlantic and Pacific coasts. These are the salt of the earth, those that tend the land and put food on our tables. Maybe they have been idealized a little bit here – unlike most family farms these days, Tracy and Jesse don’t seem to have any financial issues in keeping their farm afloat. We also don’t get a sense of the backbreaking work it takes to farm tobacco; most of this film takes place post-harvest during the late autumn and early winter months. The landscape is appropriately stark and yet rich at the same time.

Still, we get a sense of the people. Jesse, despite his rock-solid faith, is still suffering from the tragedy that befell him. He desperately wants to do the right thing and in a way, this is his way of atoning. Kinney doesn’t make Jesse too much of a martyr although he easily could; Jesse is complex and Kinney lets all his layers show.

Still, the performance of the film belongs to Amy Ryan. Tracy is almost crazed with grief in a lot of ways; Jesse wants to bury his father in consecrated ground but Tracy is insistent his ashes be buried where he toiled nearly all his life; the fields of tobacco and corn have been consecrated with his blood, his sweat and his love. Tracy sees that far more clearly than Jesse and Tracy is a bit more strident about it.

She’s not an easy character to like but we can at least relate to her and the longer the movie – which is only an hour and 16 minutes long – goes the more sympathetic she becomes. Tracy is pushing the half century mark and has spent most of her life taking care of her brother and her adopted father and things like marriage and family have passed her by. She doesn’t particularly love the farm but it’s the only home she’s ever known.

Cinematographer Andrew Reed lets us see the beauty in the stark fields, the decrepit farmhouse, the aging barn. We also see that behind the careworn lines on Tracy’s face there is a lovely woman behind them. Reed does as good a job as any cinematographer I’ve seen in making a middle aged woman beautiful without sacrificing her years; Tracy doesn’t look young for her age but she’s still beautiful.

Things move along slowly despite the brief length of the film; some might even opine that this would have made a better short film than a feature and they might have a point. Still, the movie captures a tone and a rhythm that belongs to those who toil on the land and there is a necessary beauty to that. Most Hollywood productions wouldn’t bother. I would have liked to see more of what drew these five people to the land other than the generations that lived and died there but the story being told here is a compelling one and there’s not a false note anywhere in the movie. This isn’t going to get distribution in a lot of areas but if it is playing near you I urge you to seek it out or if not, seek it out when it makes it to VOD. This is one of the best films of the year and you probably won’t see a lot of ink about it even so.

REASONS TO GO: The people and the ethics of America’s Heartland are nicely captured. This is a movie about the salt of the earth for people who relate to that feeling. The film is very well-written and very brief. Some truly lovely cinematography is here.
REASONS TO STAY: Despite the short length of the film the pace is glacial.
FAMILY VALUES: There is some profanity, including sexual references
TRIVIAL PURSUIT: The movie premiered at this year’s Tribeca Film Festival where it won the Best Screenplay award.
CRITICAL MASS: As of 10/1/17: Rotten Tomatoes: 83% positive reviews. Metacritic: 67/100.
COMPARISON SHOPPING: The River
FINAL RATING: 9.5/10
NEXT: The Rape of Recy Taylor 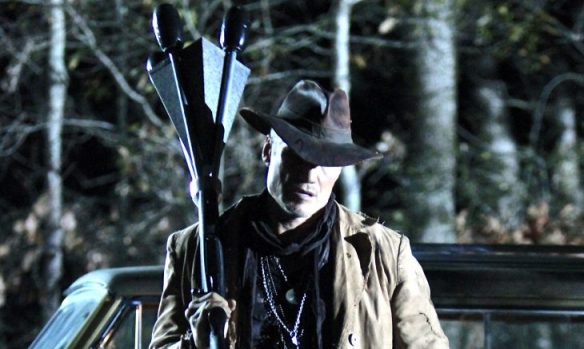 Dolph Lundgren casually gets ready for some non-lethal shooting.

Demons are notoriously hard to kill. Oftentimes people don’t even believe they exist until it’s much too late and then the demon hunting shmoe sent out to kill the thing gets to say “I told you so.” Among the hardest demons to kill are those that jump from body to body however.

A small, picturesque town in Mississippi is battered by three triple homicides in less than a week. This kind of violent crime spike gets the attention of the FBI who sends Agent Evelyn Pierce (Klebe) who is from the area and was known locally as “Evil-Lyn” which is not a term she’s particularly fond of.

But also attracted to the carnage is Jebediah Woodley (Lundgren) who is – ahem – a demon hunter. Of course, announcing a profession like that meets with a lot of sniggers and of course a lot of incredulity but as the demon continues to pile up the body count, those who are possessed display pitch black eyes and a demonic scream that is unmistakably supernatural. Soon Pierce and the local police Chief Dunham (Bentley) are believers but Pastor Erikson (Chalke) thinks that the only thing demonic are the out-of-towners Woodley and Evelyn, who he has always distrusted.

As it turns out, the demon has a special attraction to Evelyn and the stakes get just a little bit higher but the FBI comes in at just the wrong moment and even worse, the vengeful and decidedly un-Christian Pastor has plans for Woodley and Evelyn that have nothing to do with charity.

Now pushing 60, Lundgren has come a long way since Ivan Drago. He rarely gets a lot of dialogue (and he even quipped that he has more dialogue in this film than he has spoken over the past five years) and this is a performance that should change that perception that directors have of the man; I’ve actually begun to look forward to his appearances which I never would have thought would be a sentence that I’d actually utter considering some of the truly excruciating performances he’s given in some truly excruciating movies back in the 90s.

I mentioned gore and there’s plenty of it – none of it really groundbreaking but all of it perfectly placed to serve the story. Some might find some of it to be excessive but when you put it up against the horror films of the 70s and 80s it might even be considered a little tame. Sometimes it’s used for humorous effect but for the most part as I said it serves the story.

The story follows a fairly clichéd path but the conceit in which how the demon travels from body to body is clever and makes for a good story so you can overlook the clichés. Lundgren is engaging and funny and while the supporting cast is largely unknown, the performances are at least solid and never detract from the movie. I can understand why some might be reluctant to see this – horror comedies have a tendency to be too much one or the other and rarely are appealing as a complete film. This one is.

REASONS TO GO: The film possesses a subversive sense of humor. Dolph Lundgren has become a welcome addition to a film and whoever thought that would ever be a sentence? There are some nifty gore effects.
REASONS TO STAY: The story follows a cliché kind of path. The ending is a bit over-the-top.
FAMILY VALUES: There is plenty of violence, profanity, some fairly gruesome gore, sexuality and a bit of nudity. There is also excessive vaping.
TRIVIAL PURSUIT: Once the production got the final green light, there were only 12 days of prep time before shooting started.
CRITICAL MASS: As of 3/1/17: Rotten Tomatoes: No score yet. Metacritic: No score yet.
COMPARISON SHOPPING: Shocker
FINAL RATING: 6.5/10
NEXT: Love and Taxes