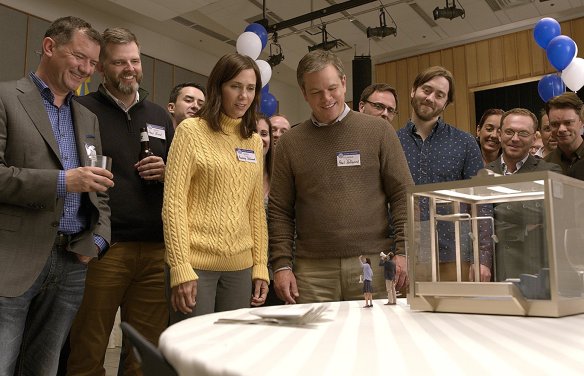 Kristen Wiig and Matt Damon have no idea how small-minded people can be.

This is an example of a movie that doesn’t know what it wants to be. Alexander Payne is one of the finest filmmakers on the planet but I suppose even the best have off-projects. This is his.

In Downsizing, scientists looking at Earth’s environmental challenges of climate change and limited resources come up with a solution – smaller people. Norwegian scientists Dr. Asbjørnsen (Lassgård) and Dr. Jacobsen (Pilmark) make a startling breakthrough – a machine that can shrink people to about five inches tall. A colony is founded in Norway by Dr. Asbjørnsen and his wife (Egeberg) and leads to colonies for the downsized as the folks who have been shrunk are called.

There are some incentives to do that. Because their need for resources is less, their wealth is stretched much further. Someone who has $30,000 in savings can be a millionaire. Financially strapped couple Paul (Damon) and Audrey (Wiig) Safranek decide to take the plunge but at the last moment Audrey changes her mind, leaving Paul five inches tall and about to be divorced. Audrey gets half of everything in the settlement which means that Paul can’t live in the palatial mansion he’d purchased but has to move to an upscale condo while working as a phone salesman for Land’s End.

One of his neighbors is Dusan Mirkovic (Waltz) who is everything that Paul isn’t; outgoing, a bon vivant, adventurous and a risk taker. Dusan makes income on the black market, supplying luxury items like cigars and champagne for the various Downsized developments. Through Dusan Paul meets Ngoc Lan Tran (Chau), a Vietnamese activist whose political activities got her forcibly shrunk and a leg removed. She is walking around on a poorly constructed prosthetic that causes her to limp and is likely to cause some damage to her hips in years to come. Paul at first offers to help her get fitted for a better prosthetic but quickly finds the woman abrasive and pushy. He also finds that she has a generous soul that is all about helping those around her. Paul realizes that he has found a calling for himself, something he’d always missed as a normal-sized guy – but events in the larger world are putting all of his plans for his future into turmoil.

That’s a shame because there are things to admire in both sides of the film. There are some very salient thoughts that this film forces the viewer to think about; there are also some genuinely funny moments. There was a chance to give the viewer a sense of wonder, seeing the world from a different perspective but Payne didn’t seize the opportunity and so basically the perspective is just the same as it would be from a normal perspective.

There are also terrible lapses in logic; the world of the very small isn’t well thought-out. The Norwegian colony should have had issues with insects and other pests; nope. We see butterflies from time to time but what about bees, wasps, mosquitoes, house flies? Not to mention beetles, bugs and spiders. It rains a lot of the time in Leisure World. Wouldn’t the rain drops seem bigger to people who are smaller? They look like regular rain though.

I also had trouble with the Ngoc Tran character. You can accuse me of cultural insensitivity if you like, but she is so pushy, so aggressive and so demanding that I can’t for the life of me figure out why someone as white bread as Paul would fall in love with her. It doesn’t make sense and the relationship is central to the movie.

I really wanted to like this movie and it had everything going for it; a terrific cast, a great concept and one of the best directors in the world. It just doesn’t work at all for me and has to be one of the biggest disappointments of 2017.

REASONS TO GO: The movie does have some thought-provoking moments. At least Payne doesn’t do what you expect him to in terms of where the plot goes.
REASONS TO STAY: The movie loses cohesion in the second half and nearly falls apart. There are too many lapses in logic.
FAMILY VALUES: There is a fair amount of profanity, some sexual references, graphic nudity and drug use.
TRIVIAL PURSUIT: The production crew used an actual Omaha Steaks plant for filming and employees were used as extras in the scenes filmed there.
CRITICAL MASS: As of 2/9/18: Rotten Tomatoes: 50% positive reviews: Metacritic: 63/100.
COMPARISON SHOPPING: The Secret World of Arrietty
FINAL RATING: 5/10
NEXT: Permission