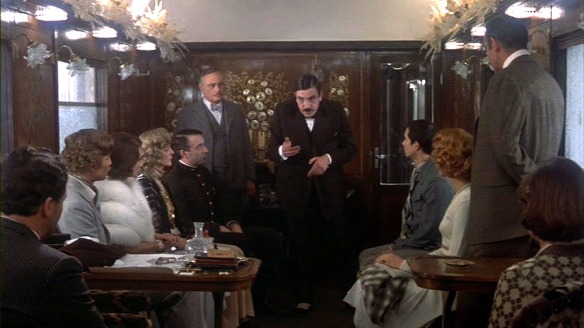 The moment of truth.

One of the more delightful movie subgenres is the whodunit, which the more sophisticated tend to call “drawing room mysteries.” They became popular during the 1930s in the midst of the depression thanks in large part to authors like Agatha Christie, G.K. Chesterton, Dorothy Sayers and Ellery Queen. These murder mysteries usually have a long list of suspects, take place in a swanky environment like an English estate or a seacoast resort.

Few, if any, reached the heights of Murder on the Orient Express, the work that would eventually become Christie’s best-known work and arguably the greatest mystery novel ever written. When master director Sidney Lumet took on this daunting work, it was with the understanding that star power was going to sell it, and he would assemble what could well be the best cast ever put together for a single movie.

And what a movie! Internationally famous detective Hercule Poirot (Finney) has solved a crime in India and is in Istanbul, preparing to return home to Belgium on the Orient Express, then the most luxurious mode of overland travel in the world. Because the train is booked solid, director of the line Signor Bianchi (Balsam), a personal friend of Poirot, gets the famed sleuth a berth on the Calais Coach.

At dinner, Poirot is approached by Ratchett (Widmark), a wealthy American businessman who believes that his life is in danger and who attempts to engage Poirot’s services as a bodyguard but Poirot refuses, uninterested in the case. Later that night, Ratchett is murdered, stabbed to death in his bed.

To Poirot’s surprise, he discovers that most of the people on the Calais coach aren’t who they appear to be, with the victim himself involved with a particularly heinous crime – the kidnapping and murder of baby Daisy Armstrong, a notorious case (based on the real Lindbergh baby kidnapping) that had ended with the baby murdered leading to her mother giving premature birth to a stillborn child and dying in the process, the father killing himself out of grief, a wrongly accused maid leaping to her death from a window and the maid’s mother dying of grief. Not only that, all of the passengers on the Calais coach had a personal connection with the Armstrong family. This will prove to be the most challenging case of Poirot’s career, not just in terms of solving the mystery but whether or not justice would be served by solving it.

The movie would be nominated for six Academy Awards and won one, for Bergman’s performance in a supporting role. In 1974 it was very much an anachronism, given the bleak anti-hero types of movies that were prevalent at the time. Murder on the Orient Express was very much a throwback to an earlier era in moviemaking and maybe that’s why it resonates so much with audiences then and now. It has a timeless quality that makes it enjoyable to all audiences since it was made, and will likely to delight audiences far into the future.

There’s the cast of course, with some of Hollywood’s elite in the credits. I think it’s safe to say that there isn’t a weak performance in the bunch and Finney, who endured hours of make-up to make him resemble the fastidious middle-aged Belgian (Finney was 37 when this was filmed) more than he did in real life (Christie herself seemed to have been fine with his portrayal but was disappointed over his moustache). While David Suchet has made quite the career for himself as Poirot on TV, I still prefer the more flamboyant version Finney gave us.

The movie is just pure fun. It nicely recreates the decadence of the era as well as giving us moments of the screaming meemies at times. While the book is much darker than the movie is, the movie remains one of my favorites, a fun ride that I still enjoy even though I’ve seen it dozens of times.

WHY RENT THIS: True movie magic. A cast the likes of which we will never see again. Perhaps Christie’s best mystery. Beautiful period setting.
WHY RENT SOMETHING ELSE: May be too light and fluffy for true mystery aficionados.
FAMILY VALUES: A scene of violence.
TRIVIAL PURSUIT: This was the only film adaptation of her work that Agatha Christie was ever truly satisfied with. She attended the premiere in 1974 and would die 14 months later in 1976.
NOTABLE HOME VIDEO EXTRAS: The DVD contained a biography of Christie hosted by her son. Sadly, the movie has never gotten the home video treatment that a film this beloved should have.
BOX OFFICE PERFORMANCE: $28.2M on a $2.3M production budget.
SITES TO SEE: Netflix (DVD rental), Amazon (not available), Vudu (not available),  iTunes (not available), Flixster (not available), Target Ticket (not available)
COMPARISON SHOPPING: Death on the Nile
FINAL RATING: 10/10
NEXT: Chappie