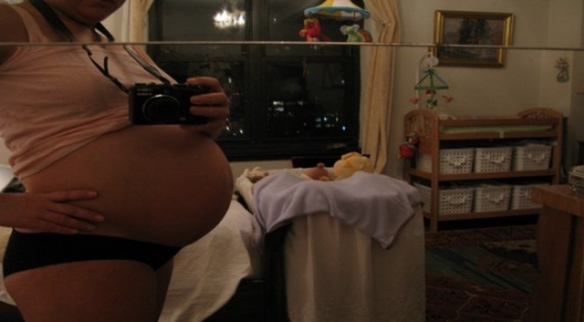 Having a baby isn’t a decision to be made lightly. It requires commitment and a certain amount of lunacy; once that decision is entered into, your life changes forever. This is doubly true for single moms, whose life focus must change to the baby they are about to have.

At 41, New York City documentary filmmaker Nina Davenport feels her biological clock ticking. Having a child of her own has been a life goal of hers and she has come to the conclusion that she can no longer wait to find the right man to have a child; she will have one without a husband and raise the baby by herself. She had a fairly idyllic childhood with a supportive mom and a father who provided well, working for the auto industry in Michigan. She also decides to document the process on-camera.

She selects Eric, a gay friend, to be the sperm donor; she assures him that he will carry no financial or moral responsibility towards the baby and can have whatever relationship with it that he chooses. He’s at first wary of the situation but ultimately agrees.

However, Davenport is faced with the death of her mother before she can get pregnant. Her relationship with her father – who is somewhat judgmental of her career choice and not the most supportive and affectionate of men – is rocky at best. Both of her brothers have achieved success in business and have families of their own. She reveals her plan to most of her family and friends seeking feedback – from her family most of it is negative. Her friends are somewhat more supportive, but one senses that there is some hesitation on their part to fully bless her scheme.

We see Ms. Davenport go through her pregnancy in all the hormonal spectacle that comes with it. We see her body become a receptacle of life and the beauty inherent in pregnancy. We see her confronting her doubts and those of her friends and family, her frustrations and her fears. We also see her joy and her eagerness to welcome a new life into the world which she eventually does, in graphic detail. For those who have ever seen a birth video, you get to see Nina’s so be aware that you see the baby come out of the birth canal and into the light so be aware of that if you’re a squeamish sort (but prospective mothers and fathers should probably see it before deciding if dad should be given a place in the delivery room).

By necessity this is a story that is very self-involved. Davenport chose to turn the camera on herself which of course invites judgment on her choices, on her life. I’m not sure I’d have had the courage to do that. Because she is not just chronicling changes to her life, but changes to her body, and thus we see a good deal of her breasts, her sex and so on. Certainly it’s brave but as my wife put it, once a woman gives birth she loses her modesty forever – the delivery room will do that to you.

I’m not 100% certain if this is the documentary she initially set out to make. I never got a sense of the bonding between Davenport and her baby although I’m sure that bond is there – it’s not something that’s easy to capture on film, particularly when you don’t have a particularly objective director.

And I think that objectivity is something this documentary could have used. We might have benefitted from another perspective other than that of the prospective mother but we are denied that and so we end up with kind of a one-dimensional film. I don’t know that this movie did Davenport any favors in her personal life; at baby Jasper’s first birthday, Nina’s apartment is full of well-wishers. For his second, there is only Nina, Jasper and Nina’s good friend and birth coach Amy. Now while that may have been by design to have a more intimate celebration, it leaves me wondering if the constant presence of the camera may have alienated some of Nina’s support group which may well be the kind of casualty that will in the long run effect Jasper just as much.

It’s not for me to question her choices mind you. I don’t know what her motivations are to document such a personal event in her life are – be it from a legitimate desire to show what single mothers approaching middle age are facing, or out of some sort of narcissistic streak inside Nina herself. That is ultimately up to the viewer to decide what they believe.

Birth is a beautiful thing. Raising a baby is an exhausting but rewarding adventure. I will say however that it is something that is far less rewarding to watch someone else do than it is to do oneself and I think that is at the core my problem with the film. It’s too much of a home movie of someone I don’t have an emotional connection with.

FAMILY VALUES:  Graphic nudity, sequences of human birth and plenty of bad language and adult themes – if your children aren’t aware of the birds and the bees yet you may wish to forego letting them see this until they’re a little older.

CRITICAL MASS: As of 4/13/13: Rotten Tomatoes: no score yet. Metacritic: no score yet; the movie has made a few appearances on the festival circuit.

NEXT: Renoir and further coverage of the 2013 Florida Film Festival!!