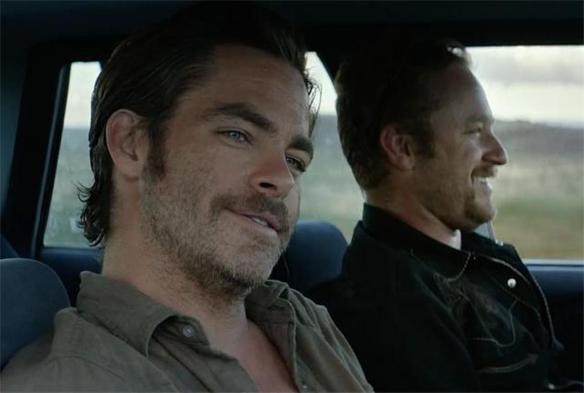 Chris Pine finds that those “Beam Me Up, Scotty” jokes get old fast.

A small regional bank in Texas is having its branches getting robbed. The two robbers are very clever and seem to know the workings of each bank thoroughly, although they are prone to making mistakes. The frequency of the robberies gets the attention of the Texas Rangers (not the baseball team) and elder statesman Marcus Hamilton (Bridges), just short of retirement, is assigned to the case along with his partner Alberto Parker (Birmingham), who is of Mexican and Indian descent which are both causes for un-PC teasing for Marcus.

Marcus is a dogged detective and he follows the thieves through their next few strikes. He correctly deduces that they are only taking small bills (harder to trace) and seem to be working towards a fixed number. He is confident that given the mistakes they have made that he will catch them soon enough.

As for the bank robbers, they are in reality two brothers. Tanner Howard (Foster) was recently released from jail after a stint for armed robbery. He has a wild streak and can behave unpredictably. His brother Toby (Pine) is more restrained; a family man in the midst of a divorce. The boys’ mother recently passed away and her property, a farm which has been in the family for generations, is about to be foreclosed on by the same bank that they are robbing unless they can pay off the remainder of her loan by Friday of that week. The boys are using a local casino to convert the ill-gotten gains from cash to chips and back to cash again – sometimes with a little extra that Tanner won at the tables.

But the law is closing in as is their deadline. To make matters worse, the boys are having a bit of a disagreement on certain aspects of their plan. Still, they are brothers and blood is thicker than water. They are determined to meet their deadline come hell or high water – and a certain Texas Ranger means to catch them before that.

In the dry dusty desert that has been the summer movie season of 2016 this is like a desert rose. The script is smarter than usual, even if there are a number of tropes present here, like the bank robbers who aren’t really bad guys, the bank as main villain, the brothers who have each other’s backs even when they are squabbling. Blood is certainly thicker than water, but only just; the relationship between the Rangers is portrayed as being as close as that of the brothers Howard. There is a moment of shock late in the film when Hamilton is faced with an unspeakable tragedy from his point of view; he literally loses it for a moment. It is one of Bridges’ best moments as an actor ever.

Pine also does some of his best work as the smarter brother. On the surface it seems that Tanner is the more violent one and the one to be feared but as the movie develops, we discover that Toby is the true rattlesnake who is in many ways even more cold and vicious than his brother, who is more of a ball of fire exploding overhead.

Foster, who is proving to be a very versatile and talented actor, has fun with his role. Tanner is occasionally mean and certainly amoral but he’s loyal to a fault, and Foster captures all of the facets of his personality, making the character kind of an anti-hero and showing both sides of him without putting undue emphasis on one side or the other. It’s a bit of a tightrope he walks but he walks it perfectly.

Mackenzie has some well-regarded films on his filmography including Asylum and Tonight You’re Mine. It surprised me that he is an Englishman; he certainly gets the rhythms and the pulse of West Texas really well. He also was smart enough to hire Nick Cave and his frequent collaborator Warren Ellis to do the soundtrack. That’s reason for going to see this right there.

The movie takes place in the midst of economic recession and the reputation of banks, never sterling to begin with, is still as low as ever. Most people believe banks are run by money-grubbing scoundrels who care only about getting every last penny they can for themselves and aren’t above screwing over the working people to get it – largely because that seems to be the case. In a sense, this is a bit of revenge porn for most of us who have been screwed over by financial institutions one way or another, either through predatory loans, outrageous fees and onerous interest rates or all the way down to shitty customer service. Most people these days look at banks pretty much the same way they look at drug cartels and if we can see a movie about a person sticking it to a bank, most of us are quite all right with that. If you’re not okay with that, you might want to give this one a miss.

REASONS TO GO: Tremendous performances by the three leads, all worth savoring. The cinematography of the desolate West Texas plains is starkly beautiful. The juxtaposition of the relationships between the brothers and the Rangers is thought-provoking.
REASONS TO STAY: The commentary on economic issues may be unwelcome to conservative sorts.
FAMILY VALUES:  There’s a good deal of violence and bloodshed, profanity throughout and a couple of scenes of sexuality.
TRIVIAL PURSUIT:  Pine and Foster also co-starred in The Finest Hours earlier this year.
CRITICAL MASS: As of 9/14/16: Rotten Tomatoes: 98% positive reviews. Metacritic: 88/100.
COMPARISON SHOPPING: August: Osage County
FINAL RATING: 8.5/10
NEXT: The People vs. Fritz Bauer