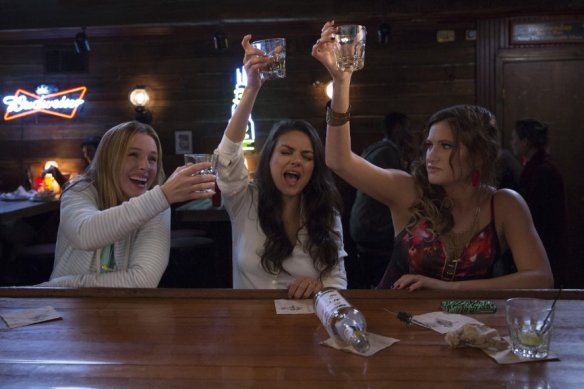 Motherhood isn’t all it’s cracked up to be these days. The expectations that are put on the shoulders of moms are simply unrealistic. Not only do they have to keep their kids days filled with various activities, they have to balance a career, the needs of their husband, working out, bake sales and PTA meetings with the needs of their parents and siblings as well. Something has got to give in these cases and it’s usually the women trying to be all things to all people.

Amy Mitchell (Kunis) has about reached her breaking point. First of all, she’s caught her husband Mike (Walton) having an online affair. Her marriage has essentially been an empty shell for years so he doesn’t complain too much when she kicks his ass out. Now, however, she has to go the single mom route which is no easy task for a woman who is perpetually late to everything.

Her daughter Jane (Laurence) is stressing herself out trying to make the soccer team which looks good on the transcripts when applying to the Ivy League schools Jane so desperately wants to attend. The Queen Bee of the PTA and poster child for perfect moms, Gwendolyn (Applegate) gives her askance looks, directing passive aggressive taunts her way. And she can’t get any respect at work.

So Amy has a meltdown. Right in the middle of a PTA meeting, no less. After receiving an extensive list of things not to bring to the upcoming bake sale, Amy just loses it. She is done trying to be a good mom. It’s time to be a bad mom for once. She goes to a bar and is surprised to find a couple of her fellow moms there; single mom Carla (Hahn) who seems to be potentially coming on to anything male, and breathless put-upon Kiki (Bell) who is sweet but overwhelmed with a husband who treats her like a house cleaner. The three ladies bond and begin a campaign of their own.

At first it’s all fun and games; Amy goes out and begins to have a life again. She forces her kids to make their own breakfasts and do their own homework rather than doing it for them. She goes to movies and to brunches with her friends. She starts to see a hunky widower (Hernandez) that all the women in school are lusting after. She quits her job and it isn’t long before her boss (Duke) is begging her to come back.

But Gwendolyn and her Gwendo-lettes (Smith, Mumolo) take this as an affront, a challenge to Gwendolyn’s authority and absolute rule of the PTA. Gwendolyn begins to attack and she targets Amy’s daughter, who is high strung enough as it is. Mama bears don’t take kindly to having their cubs threatened and Amy decides to take on Gwendolyn where it would hurt the most; she runs against her for the PTA presidency.

This is a raunchy comedy from the folks that brought us The Hangover and its sequels. And yes, in some ways it’s a distaff version of that series but rather than male bonding which has been done to death and even female bonding, which has also had its share of movies made about it, this one is about the expectations piled onto the modern mom and there is certainly room for a movie on that subject. I do think we pile unreasonable demands on mothers these days and while this film focuses on upper middle class helicopter moms, similar demands are made on women from less comfortable economic strata.

For this movie to work, it needs to have some chemistry between the leads and to be honest, it isn’t quite as consistent as I would have liked. Hahn is a force of nature and absolutely dominates the movie; Kunis is an excellent actress but in a lot of ways she’s overwhelmed by Hahn’s personality. Bell is almost under the radar, her character too mousy and too innocuous to really make much of an impression.

At times the movie doesn’t really seem to address real life. For example, most of the moms that are in the film are stay at home moms and that just doesn’t jive with current stats; most moms are also in the workforce. It’s freakin’ expensive to raise a family and most families can’t do that on a single salary unless that salary is six figures or more. The helicopter mom phenomenon isn’t one solely limited to the upper classes.

By the same token, I don’t think it’s of particular shock value that women can be just as dirty in their behavior as men. Women, after all, do like and crave sex as well as men. Why this should be a shocking fact in 2016 is beyond me. There are those complaining that the movie doesn’t have to be raunchy, that woman can be funny without it. This is quite true but the same goes for men as well and serves to indicate that there is a double standard on both sides of the gender equation. Men and woman can both be raunchy or not; it makes no difference what the gender is. What matters is if you find the movie funny, or not. In my case, I found it funny enough to recommend as one of the better comedies this summer which frankly isn’t saying much, but hopefully this will also spawn a franchise. Lord knows that the ladies deserve one.

REASONS TO GO: The film addresses some real issues.  It’s really funny in a lot of different ways.
REASONS TO STAY: The movie isn’t as revolutionary as the filmmakers think it is. In some ways, it’s not very realistic.
FAMILY VALUES:  There’s a whole lot of profanity and sexuality, some full frontal nudity, as well as drug and alcohol content.
TRIVIAL PURSUIT: The closing credits feature the main actresses having conversations about motherhood with their real life moms. All of those actresses are moms themselves.
CRITICAL MASS: As of 8/28/16: Rotten Tomatoes: 61% positive reviews. Metacritic: 60/100.
COMPARISON SHOPPING: Daddy Day Care
FINAL RATING: 6.5/10
NEXT: Suicide Squad

Making a connection with your own child isn’t always easy, particularly when you haven’t been around much. Connecting involves presence, and if you aren’t present, there’s nothing for your kid to connect with.

That’s been the story with George (Butler), once a soccer star in Europe who eventually played in the MLS in its early days but after an ankle injury forced him to retire, George has been struggling to keep it together. He is staying in the Virginia suburbs of our nation’s capital – not just because his last team was DC United, but because that’s where his son Lewis (Lomax) lives with his mom Stacie (Biel). George and Stacie were together once but no longer; in fact, we learn early on she’s engaged to marry her new boyfriend Matt (Tupper) who seems to be a much nicer guy than George; certainly he’s more stable.

Thing aren’t going terribly for George in any other facet of his life. He’s broke, would love to be working a sportscasting job but can’t find one to save his life, He lives in the guest house of a wealthy Indian man (Theba) and drives an Alfa Romeo which sounds posh until you realize that it was probably brand new at about the same time Frankie Goes to Hollywood was.

Soccer is really the only connection George has with his son. His son’s coach spends more time on the phone than training his young players (“Kick it with your toes” is about his only advice) and soon George can’t stand it and starts showing the youngsters a few pointers. The kids take to his instruction and soon by parental proclamation George is named the team’s new coach which is just in the nick of time since they haven’t scored a goal all season.

Things start looking up. The soccer moms, cougars all, start throwing themselves at George, among them redheaded Barb (Greer), a recent divorcee who has got a case of the hornies big time, brunette Denise (Zeta-Jones), a single mom who is an ex-sportscaster herself who thinks the way to George’s heart might be through her career connections, and blonde Patti (Thurman), the wife of Carl (Quaid) who is an expansive Texas-style businessman who thinks nothing of loaning George his Ferrari nor using his fame to close a business deal with Brazilian soccer fanatics.

Best of all, Lewis and George are beginning to find some common ground and even Stacie is looking at George in an entirely different light. But this being a Hollywood rom com, that’s just the calm before the storm. George’s sexual escapades begin to catch up with him and just as he’s ready to settle down, ESPN comes a’knockin’. George may have to choose between career and kid.

Muccino made his reputation as the director of the Will Smith hit Pursuit of Happyness and truth be told that was a much better film than this one. This is more or less standard Hollywood romantic comedy fare with few (if any) surprises. What keeps this from pure direct-to-video cheesiness is Butler whose easygoing Scottish charm make the movie. While his character really lacks inertia – things pretty much just happen to him rather than him making them happen – he gets by on a smile and an accent (not to mention a body that made most of the ladies in the auditorium sigh).

His chemistry with Biel is a bit bland to be honest; while I could see his appeal to her, her appeal to him wasn’t as apparent. I would have liked to have seen more fire from Ms. Biel; she’s shown it in plenty of roles so I know she possesses it. It’s just not in evidence here. As a result the romance in the romantic comedy is sorely lacking.

The supporting cast are pretty big name and only Greer really shines among them, although Quaid makes a game try. Quaid has been one of my favorite actors for quite a few years now and this is the sort of role that he excels at. A bit stuffy and a bit unctuous and not necessarily a good guy (although Quaid does good guys pretty well), but a lot of fun to be around.

Unfortunately the movie has more faults than strengths. This is clearly a movie aimed at the female audience but the women in the film are mainly bedroom ornaments for George. If you’re going to appeal to women, you need an appealing woman in the cast. All of the movies in the movie seem to be defined by their relationships with men. That’s not going to make your target audience happy.

Still, Butler is going to make plenty of the target audience happy, particularly in those scenes where his shirt comes off (and there are a few). Ultimately this is pretty disposable but not real offensive, unless predictable plot points offend you. In a holiday movie season where there aren’t a lot of rom com options to choose from, it will fit the bill but it doesn’t really hold up against the better movies of the genre. In short, it ain’t no Sleepless in Seattle.

REASONS TO GO: Gerard Butler is at his charming best.

REASONS TO STAY: No chemistry and no heat. Most of the women in the movie exist to bed Butler. A romantic comedy without romance.

FAMILY VALUES:  There is a bit o’ sexiness and some foul language.

SOCCER LOVERS: There’s quite a bit of the Youth game variety but Butler has a few nice moves that he shows off at various times of the movie.

NEXT: The Hobbit: An Unexpected Journey