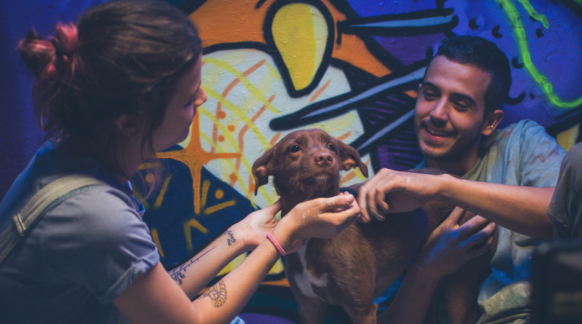 Taking it to the streets.

Art is a universal, something that reaches across cultural and social lines, be they class distinctions, or international borders. What makes film so universal is that we can often recognize the same issues that we ourselves face or have faced while watching those who live thousands of miles from us undergo the same tribulations.

Cris (Ochoa) and Simon (Orrego) are about as disparate as you can get; Cris is a college student from a well-off family. She lives with her father (Táppan), who has remarried a much younger woman (Fajardo) who doesn’t get along well with Cris, who isn’t much younger than her stepmom. Her actual mom (M. Restrepo), an investigative journalist, has had to flee to Spain after running afoul of the local criminal gang that runs the streets of Medellin, Colombia where Cris and her dad live.

Simon is from a working-class family; he is close to his grandmother who tolerates his frequent absences and always has a home-cooked meal at the ready for him. Both Simon and Cris spend a lot of their time in an art collective run by Lucas (Fonnegra). The same gang that ran off Cris’ mother is extorting protection money from the collective as they are from most of the small businesses in the area. Simon, something of a risk-taker, goes out at night as a graffiti artist, using Medellin as his canvas.

At first, Cris goes out with him to paint as well, but their platonic relationship grows closer and more intimate. As that occurs, the collective, unable to pay the protection money, is getting sinister messages spray painted on the wall across the street from their front door. Simon, who once ran with some of the boys in the gang, decides to paint over the warning and put up a mural of a whale to cover it. Cris, much more cautious as she has seen first-hand just how vicious the gang can be, urges him to back off, but that’s not in Simon’s vocabulary. Whether you consider his actions to be bravery or bravado, those actions will have consequences.

I debated summarizing the plot because it might lead you to believe that this is a crime thriller, and it is far from that. The movie is about the coming of age of Cris and Simon, and of their budding relationship. There is a sweetness between the two, a shy awkwardness that goes with two young people exploring feelings that they’ve never had before, but this isn’t exploitative in the least either – while most American coming-of-age films tend to be more raunchy recently than in the past, this one is more gentle.

Most of the cast are not professionals and while the down side of that is that inexperience can sometimes lead to poor acting choices, there is also a naturalness to the performances that is appealing, particularly in Ochoa who like many Latin women her age, seem to have absolutely no clue how incredibly gorgeous they are.

The ending was a little unrealistic to my thinking; criminal gangs are not noted for their forgiving nature and while there are some tense moments, the resolution felt a little too fairy tale-like. But then again, I don’t think Restrepo is going for gritty realism here; she is capturing feelings and situations that are common to most of us even if the situation is uncommon. Most of us don’t live our lives controlled by criminal gangs.

Even so, this is an impressive debut and although it hasn’t made much of a splash in terms of buzz on the indie circuit, it is well worth your effort to look into it. One of the silver linings of the pandemic is that films like this are getting more widespread exposure as this one gets a Virtual Cinematic release. Florida theaters benefiting from VOD rentals include the Tropic Cinema in Key West and the Tallahassee Film Society. Click on the Virtual Cinematic Experience link below for a complete list of theaters that are running the movie on demand – if there isn’t a theater near you on the list, you might choose another theater deserving of your support. It’s a win-win for you in any case.

REASONS TO SEE: The performances are pretty much natural and well-received.
REASONS TO AVOID: The ending is a little too Hollywood for my taste.
FAMILY VALUES: There is drug use, profanity, some violence and sexual references.
TRIVIAL PURSUIT: This is the first feature for Catalina Restrepo.
BEYOND THE THEATERS: Virtual Cinematic Experience
CRITICAL MASS: As of 7/28/20: Rotten Tomatoes: 100% positive reviews, Metacritic: 72/100
COMPARISON SHOPPING: Savages
FINAL RATING: 7.5/10
NEXT: The Photographer of Malthausen 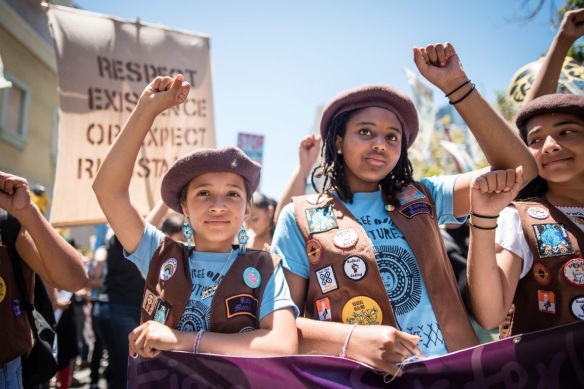 The youth speak truth to power.

The San Francisco Bay Area has long been a hotbed of progressive ideas and thought, a region whose watchwords are “tolerance” and “acceptance.” When community organizer Anayvette Martinez’s daughter Lupita expressed interest in joining the Girl Scouts, Anayvette had reservations. She was concerned that her daughter was growing up in a world in which girls of color were marginalized and made to feel inadequate. Standards of beauty and success were (and are) almost all oriented towards the viewpoints of European descendants.

She wanted her daughter not to be an outsider, but at the very center of the organization, but she was certain that could never happen in the Scouts. So she and her close friend Marilyn Hollinquest – who like Anayvette is a single mom who identifies as lesbian – decided to form an organization in which young girls of color were shown that they were just as important, just as worthwhile as any other person. Thus, the Radical Brownies were formed.

The group eventually changed their name to Radical Monarchs (although not explicitly mentioned in the film, I would imagine that the GSA had some concerns with the group using the name “Brownies”) which is more meaningful; like the butterfly which is in their logo, the Radical Monarchs promote the beauty of color and symbolize the butterfly emerging from its cocoon.

The film follows the first Radical Monarchs troop from 2015 through 2018, documenting the formation of a second Bay Area troop and the financial challenges faced by both young mothers as they balance the needs of the organization with the needs of their full-time jobs and of course the needs of their children as well. If ever the term “supermom” was deserved, these two ladies deserve it.

The girls are taught the joys of activism and their meetings are almost like school classes in which various social subjects are taught, from the need for Black Lives Matter to body image to social justice. And yes, the girls get badges for completing the work in each module. The founders mention the inspiration of groups like the Black Panthers, the Brown Panthers and other radical groups (the uniforms of the girls include a brown beret and vest that is reminiscent of 60s radical chic) which of course will no doubt set alarm bells ringing among more conservative viewers.

Still, the young girls are very well-spoken and thoughtful. I don’t get the sense that they’re merely parroting the concepts that the troop leaders are trying to teach; one gets the impression that these girls have given it some thought and have brought their own life experiences into their way of thinking, as brief as those lives have been to that point. The girls are even brought in to address the Oakland city council regarding a bill that would protect renters and while it has a bit of the school project to it, the sincerity of the girls is nonetheless heart-warming.

Several times during the film the founders remark that they have been swamped with requests to start troops all over  the country, but they don’t have the financial viability to do it yet (although they have since received a grant that will keep the group going at least through the end of 2020).

Knowlton seems to be overly-fawning at times and while at one point one of the young girls talks about whether white girls would be made welcome in the group, while it’s never explicitly said one way or the other there is a strong sense that they wouldn’t be, which seems to perpetuate a culture of exclusion and an us vs. them mentality. I get that groups like this are desperately needed for young girls of color to find an opportunity to develop, and bond with other girls and that there are plenty of similar groups that white girls are welcome to join. But the tough question that’s never asked is how do we ever learn tolerance of other views when we aren’t exposed to them? How do we learn to be inclusive of others if we’re going to keep our children segregated? I don’t know that is the intention of the leaders of the Radical Monarchs to create a divide but it’s a question that deserves to at least be addressed, and it simply isn’t.

Still, this is an inspiring group of young ladies who seem well-poised to be the activists and leaders of tomorrow. If you think that those protesting social injustice now are just going to go away, you may find it troubling (or comforting) to know that the next generation is already learning the ropes. The struggle continues, and will continue until girls like this get the respect, opportunity and equality that they deserve. That we all deserve.

The film is streaming on the PBS website for their documentary series POV up through August 19, 2020. You can click on the link below to view the film. Check with your local listings to see if the film will be broadcast again on your local PBS station.

REASONS TO SEE: Inspiring watching young girls of color being taught to stand up for themselves.
REASONS TO AVOID: Somewhat hagiographic.
FAMILY VALUES: Some of the topics discussed here are on the adult side, although the troop leaders discuss them with their young charges in a mature and safe manner.
TRIVIAL PURSUIT: The Radical Monarchs were founded in December 2014 as an alternative to the Girl Scouts, with an emphasis on subjects of interest to the Black and Latinx communities.
BEYOND THE THEATERS: POV
CRITICAL MASS: As of 7/25/20: Rotten Tomatoes: No score yet, Metacritic: No score yet
COMPARISON SHOPPING: O Beautiful
FINAL RATING: 6.5/10
NEXT: The Grand Unified Theory of Howard Bloom