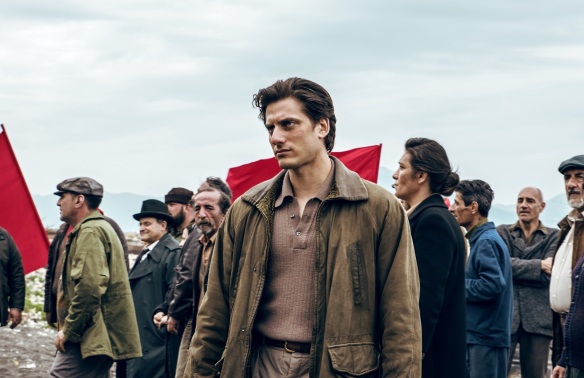 2020 has given us not one but two films based on novels by Jack London, the Harrison Ford-led Call of the Wild and this one. They couldn’t be two more different films.

The titular Martin (Marinelli) doesn’t toil as a longshoreman in Oakland as was the case in the original 1909 novel, but as a sailor in the Mediterranean. When he saves a young boy from a beating on the pier, it turns out that the boy is the scion of a wealthy family, the Orsini clan. Their comely daughter Elena (Cressy) is well-educated, intelligent, witty and an angelic beauty. She falls for the ruggedly handsome Martin much to the dismay of her bourgeois family.

Martin is equally smitten but realizes that any kind of relationship between the two of them is impossible so long as he is poor. He determines to make his fortune as a writer, and as a writer he follows the dictum to write what he knows. Unfortunately, what he mainly knows is rage against the machine, as he becomes slowly more radicalized. He moves from menial job to menial job, scraping by, while his writing career goes nowhere. He perseveres and Elena hangs in there, but as Martin finally finds success, he changes and slowly the thing he wanted most begins to slip away, furthering his rage.

There is an epic quality to the film as we watch the arc of Martin’s life, his involvement with intellectuals, with the wealthy Orsini family and with radical socialists who seek to make sweeping changes in Italy. Much of what Martin communicates in the second half of the film is half-screamed as he rails at socialists whom he sees as doomed to fail, but more so at capitalists who exploit people like himself. Soon, all he has is that anger.

Marcello, better known for his documentaries although he has an excellent narrative feature (Lost and Beautiful) on his resume, has a good eye. He intersperses archival footage of turn-of-the-century Italy as well as faux archival footage of a magnificent sailing ship which seems to be a metaphor for Martin’s success…or ambitions…or dreams; take your pick.

The movie is extremely well-acted as Marinelli does his best to make a character who slowly becomes consumed with fury likable and relatable and, for the most part, succeeds. Cressy is luminous and radiates intelligence; in many ways, she’s a more interesting character than Martin is although his story is a tragic one.

I suspect conservative-leaning readers may shudder at the thought of a movie that looks at socialists but they are not romanticized in the least. However, it doesn’t sugarcoat the snobbery of the Orsinis. Painting both sides as equally non-admirable. London wrote the novel as a means to reconcile his success (the novel was written after the bulk of his most successful novels had made London a wealthy man) with his socialist leanings. I don’t know if London had an inner uncontrollable rage that characterizes Martin (at the time he wrote it he was suffering from the kidney disease that would become nearly unbearable in the later stages of his life) but certainly there’s a lot of Martin Eden in Jack London, and vice versa. Success comes with its own measures and they don’t always have to do with the size of the paycheck.

REASONS TO SEE: A lyrically photographed tale that is epic in scope and feel.
REASONS TO AVOID: Turns into a socialist polemic at times as Martin becomes more unlikable.
FAMILY VALUES: There is some profanity, violence and sexual content..
TRIVIAL PURSUIT: The ending of the novel led to speculation that London’s death may not have been accidental.
BEYOND THE THEATERS: Virtual Cinema
CRITICAL MASS: As of 10/22/20: Rotten Tomatoes: 83% positive reviews. Metacritic: 67/100.
COMPARISON SHOPPING: Reds
FINAL RATING: 7/10
NEXT: Linda and the Mockingbirds