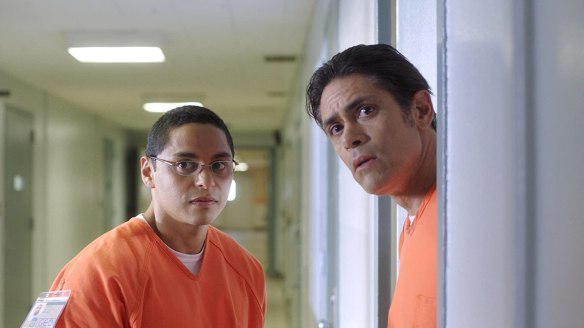 On the inside of a national debate.

The question of illegal immigration is a polarizing one without a doubt; some take a hard line at the word “illegal” and point out that there would be no problems if only these immigrants would come here legally. Others counter with the fact that it is incredibly difficult to enter the country legally for the purpose of working, despite the fact that immigrants fulfill many of the jobs that Americans can’t or won’t do, from picking crops to mowing lawns to washing dishes to cleaning toilets.

=Activists in the National Immigrant Youth Alliance are looking to change things. They decided to put their own freedom in jeopardy and purposely get arrested to be detained in the for-profit Broward Transitional Center in South Florida, owned by George Zoley of the GEO Corp, who is paid taxpayer money for each deportee he houses, often without trial or even access to a lawyer.

Ibarra and Rivera take the fascinating step of blending documentary interviews with those who actually took part in the affair, as well as some of the detainees. This is mixed in with actors playing those roles, re-enacting other incidents inside the BTC. The actors are identified on-screen when they are taking over from the real people, so we have Maynor Alvarado playing the charismatic Marco Saavedra, Dennis Mencia playing Samuel Soto, Manuel Uriza playing Claudio Rojas (more on him in a minute) and Chelsea Rendon playing the courageous but nervous Viridiana Martinez.

The movie has a bit of a thriller aspect to it, as tiny mistakes can get the activists discovered as time works against the detainees. Ibarra and Rivera weave actual footage from the 2012 infiltration along with contemporary news footage, interviews and re-enactments to tell a tense story that is as good as ay Mission: Impossible movie. Some of the activists, particularly Saavedra and Mohammad Abdollahi, a gay man who fled Iran, are particularly eloquent. Incidentally, the film also points out that while Latins make up the bulk of the illegal immigrants in detention centers, they are by far not the only ethnic group here illegally; the movie has detainees from the Middle East, Africa although coincidentally not Europe, where statistically the largest number of illegal aliens are from – mainly people with temporary visas who stay beyond the deadline.

Shortly before the movie’s Miami Film Festival premiere last year, one of the subjects – Claudio Rojas – who had been released from the facility and was attempting to gain legal status, was arrested during a routine appointment with the INS and later deported to Argentina amid much outcry, certainly as retaliation against his appearance in the film. What we witness in this gripping film serves to show just how unjust and corrupt the system is, and that people of good conscience are still willing to risk their own freedom to protect the liberty of others. That at least is somewhat hopeful.

REASONS TO SEE: An interesting mix of documentary and narrative. Timely insight into the Trump Administration’s response to immigration. Feels like a spy thriller in places.
REASONS TO AVOID: Could have used an update at the end.
FAMILY VALUES: There are adult themes as well as some mild profanity.
TRIVIAL PURSUIT: Both Ibarra and Rivera had previously directed films on their own – Sleep Dealer for Rivera, Las Marthas for Ibarra.
BEYOND THE THEATERS: Amazon, Fandango Now, Google Play, Microsoft, Vudu, YouTube
CRITICAL MASS: As of 6/16/20: Rotten Tomatoes: 87% positive reviews, Metacritic: 74/100
COMPARISON SHOPPING: Mission: Impossible
FINAL RATING: 8/10
NEXT: Seahorse: The Dad Who Gave Birth 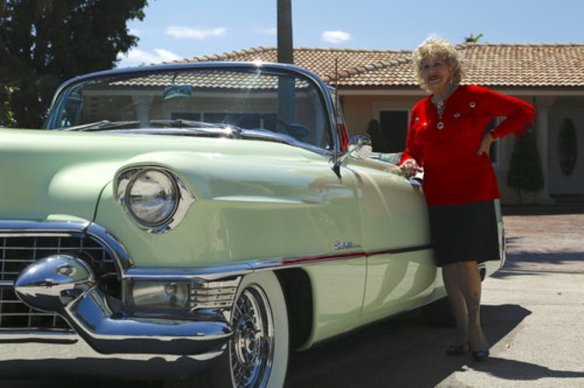 People are people; what’s on the outside is just gift wrapping.

Everyone has their own journey in life to take. Sometimes it seems to follow a set path but some journeys take us in unexpected ways to unexpected places. All we can really do is enjoy the ride; and it is a helluva ride.

She started out life as Butch Rosichan. A short, stocky man who made a living as an auto wrecker in Broward County (South Florida), he was a bulldog of a man who would get in your face at any perceived slight. He was not above getting into fistfights if he was provoked Homophobic and crude, he was something of a ladies’ man who had two sons from a failed marriage but that was nothing like his second marriage.

His divorce from that marriage turned into a bitter, knock-down drag-out thing. His ex and her pit bull of a lawyer hounded Butch into losing everything and then put him in jail for non-payment of alimony. When he finished serving his 120 days in the hoosegow, he found his business was finished and shortly thereafter another warrant for non-payment of alimony was issued. Not wanting to return to jail, he went into hiding instead – as a woman. Thus Gloria Stein was born.

As it turned out, she liked being a woman and decided that it wasn’t just a disguise. In 2003 she underwent surgery to change his gender. As Gloria, she met a man, Dan Friedman who as it turned out had been born a woman; Dan helped Gloria mellow out and smoothed out some of her rougher edges. She began reaching out to family members that she had alienated as Butch and began reconciling with them, although her two sons as of the filming of this documentary had yet to accept her or even return her calls. This is clearly very painful for her.

Butch became Gloria at the fairly advanced age of 67 (she’s pushing 80 now) and became the subject of a documentary by then-PBS documentary director Symon. The project, which was initially intended just to cover her transition from male to female became a decade-long endeavor.

There are a lot of empty spaces in the film however and in many ways Gloria isn’t very forthcoming. When asked why she decided to undergo the sex change, she blurts out ‘I don’t know” and that feels a bit disingenuous. I suspect she knows but either can’t or won’t articulate it. Some of the more negative aspects of her life are glossed over somewhat; why she was unable to pay her alimony is never discussed although it is hinted at.

Apparently as Butch she was also involved in a stolen car ring but we don’t hear a lot about that other than a couple of moments discussing how she and her first wife used to take a cab to a restaurant then steal cars from the valet lot. Beyond that, we learn nothing about how she got involved with stealing cars and why. We’re also told that as Butch she was a homophobe but we get nothing else; I for one would love to have heard her feelings on her homophobia now that she has become a transgender. Considering that the documentary is only 76 minutes long, it seems incomprehensible that Symon had ten years to film and could only come up with 76 minutes of footage for her final product.

Symon utilizes home movie footage, re-enactments of certain events but primarily interviews with friends and family of Gloria, all of whom knew her as Butch. I’m wondering if the film couldn’t have used at least a couple of people who only knew Gloria and not Butch. The movie overall has a wry sense of humor about it that I liked very much.

It’s a fascinating documentary but maddeningly incomplete. I suppose it’s better to leave an audience wanting more than wanting less, but it’s still not a good feeling to leave a documentary wanting to know more about the subject and knowing that there was plenty of room to give us more. This feels more like a work in progress than a completed film, but at least it’s a quality work in progress.

REASONS TO GO: Stein is an engaging subject. The movie has a wry tone that is delightful.
REASONS TO STAY: The film could use much more fleshing out. Gloria needed to be a lot more forthcoming about her past.
FAMILY VALUES: There are adult themes, some profanity and brief sexual references.
TRIVIAL PURSUIT: Symon during her time at PBS won two Emmys.
CRITICAL MASS: As of 11/6/17: Rotten Tomatoes: No score yet. Metacritic: No score yet.
COMPARISON SHOPPING: Woman on Fire
FINAL RATING: 6/10
NEXT: Blood Stripe