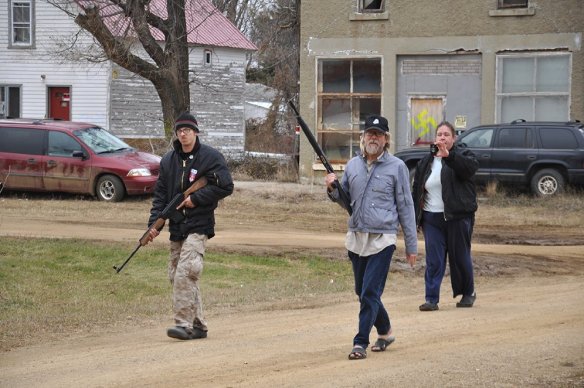 Nothing supreme about these whites.

Leith, North Dakota, on the surface seems to be an unremarkable small town in the Great Plains. A rural hamlet of 24 hard working people, it’s indistinguishable from dozens, hundreds of towns just like it. That wasn’t always the case though.

In 2012 a man named Craig Cobb bought a home in Leith. Not a remarkable thing in and of itself, although people moving into Leith is a big event in Leith. Some of the residents went to greet the new neighbor, but for the most part he resisted any attempts to socialize. People figured he just wanted to keep to himself and gave him space. In North Dakota, people mind their own business.

That’s not true elsewhere. The Southern Poverty Law Center had been keeping tabs on the main players in the White Supremacy movement, and it turns out that Cobb was one of the major players among the neo-Nazis. They also discovered that he was out to take over this town by quietly buying up plots of land for a song, then turning around and selling them to other white supremacists. Once they had a voting majority, they would take over the city government and create a paradise on the plains for racists.

That didn’t sit well with the townsfolk of Leith, who wanted nothing more than to live out their lives in their small slice o’ heaven without bother or fuss, but to have armed racists terrorizing the town carrying loaded rifles around town, getting into confrontations with citizens of Leith and of course sending all sorts of worry into the town’s lone African-American and his family, something had to be done to stop Cobb. But what could they do?

Filmmakers Nichols and Walker offer a surprisingly balanced and dispassionate chronicle of the events in Leith with interviews with Cobb and his follower Dutton as well as Schock – the town’s mayor – as well as other townspeople and other interested parties. Both sides are allowed to present their point of view.

And in fact, in some ways, the racists have some salient points. They’re doing nothing illegal. They’re simply taking advantage of the town’s by-laws and of laws that are common throughout North Dakota and the U.S. in general. Until they start stalking the streets with shotguns, they seem to be well on their way to accomplishing their goal. Of course, once they start talking their world view shows itself to be completely repugnant, but the filmmakers wisely let them dig that hole themselves rather than pointing self-righteous fingers. The former method is far more effective than the latter.

They also paint a beautiful picture of a small town in what would at first glance seem to be a stark and barren land. They are relatively close to the booming oilfields that have been attracting workers to the area (and are the subject of another acclaimed  documentary, The Overnighters but that is another review for another day), but the way the filmmakers shoot the landscape it is almost mystical. You can easily see why the people love this place and want to defend it so vigorously. There is a beauty that is quiet and unassuming but unforgettable nonetheless.

One of the few quibbles I have with the movie is Credo 64. You see “Credo 64” emblazoned throughout the film on signs around town left by the supremacists, but it is never explained in the movie. For the record, it refers to the “White Man’s Bible” which is the holy book of the Creator sect, a Christian-like religion that has rewritten the Bible to reflect White Supremacist doctrine. Credo 64 essentially permits Creators to act as terrorists and vigilantes when their government oppresses them and is in this instance a veiled threat to the town, one which probably should have been explained better in the movie.

There is also a fairly large usage of racial epithets including the N word throughout; if that makes you as a viewer uncomfortable, you may want to give that some consideration. I found myself numbed to it pretty quickly, but I did feel uncomfortable initially. Depending on your sensitivity to that sort of thing your reaction may differ.

This is an essential documentary. It is easy to forget that people like the Craig Cobbs of the world took over an entire country and swayed them to their morally bankrupt principles and turned that country into a military threat that destabilized the entire world until an alliance of the United States, France, the United Kingdom, the Soviet Union and other nations put down that threat for good. But it could still happen here; it almost happened in Leith but for the will of the people who lived there. It could happen elsewhere, maybe where you live and when it does, it will be insidious, someone who spreads fear, mistrust and hatred until the entire community rallies around a demagogue who will lead them to victory over the object of that fear, mistrust and hatred. Don’t think it can happen here? Look at how many people are supporting laws that oppress the LBGT community. Look at how easily the voting rights, so dearly won in 1964, have been swept aside. It can happen here. And it will happen here if we aren’t careful. Welcome to Leith reminds us that we need to stand up together and say “No” when an entire community is threatened and that’s how you ensure that it doesn’t happen here.

REASONS TO GO: Chilling to the bone. Beautiful cinematography. Captures the conflict fairly.
REASONS TO STAY: Leaves a few terms unexplained.
FAMILY VALUES: Adult themes. Some foul language.
TRIVIAL PURSUIT: Premiered at this year’s Sundance Film Festival where Rolling Stone named it one of the ten best films of the festival.
CRITICAL MASS: As of 4/20/15: Rotten Tomatoes: 100% positive reviews. Metacritic: no score yet.
COMPARISON SHOPPING: Invasion of the Body Snatchers (1956)
FINAL RATING: 8.5/10
NEXT: Gabriel