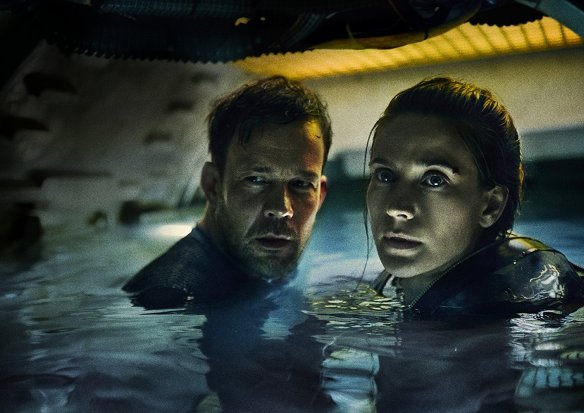 Rising waters are a bad thing on a mini-sub.

The ocean remains an enigma for most of us. The last great unexplored space on Earth, it is as alien a landscape as Mars. Creatures that live down there are very different than us and the greater depths you go, the stranger the creatures are. The only way humans can explore down there are in great tin cans pumped full of oxygen – and there is so much that can go wrong.

Mats (Kuhnke) is the pilot of a mini-submersible that is currently leased out to a South Korean corporate entity. The Aurora is aging, nearly obsolete in many ways and held together with crazy glue, duct tape and the grace of God. When a group of American special ops types commandeer the sub, Mats is given no choice but to be their bus driver. Flinty and occasionally hysterical mission commander “Red” Edwards (Salt) tries to radiate as much testosterone as her team; brainy Denholm (Levey) and Parks (McArdle), a bear of a man with a hair-trigger temper.

They are after something on the ocean floor and in the waters of North Korea. What could possibly go wrong? Well, as it turns out – everything  Mats who is decidedly non-trusting of the decision making capabilities of this team (and with good reason as it turns out) balks at some of the orders he is given. Despite his assertion that “I know this ship” and assuming that when it comes to crew safety his authority supersedes that of Edwards, he discovers his assumptions are completely groundless when Edwards makes a terrible decision that puts everyone on the sub at grave risk.

Claustrophobic survival tales set on submarines are nothing particularly new and to be really honest The Chamber doesn’t add much to that particular subgenre. The set is pretty unconvincing – it looks like a set, to begin with, rather than an actual sub – although first-time director Parker does a fine job of getting across the claustrophobic surroundings and the rising paranoia and panic that goes along with being trapped in a crippled sub with uncertain circumstances and an unlikelihood of rescue. Most of the movie is just the four characters which you would think would leave some time for a little bit of character development but Parker who also wrote the screenplay chose not to go that route.

Instead we’re treated to a quartet of stereotypes and clichés that run through the usual motions in a film like this. Kuhnke shows some signs of being an excellent leading man. Some might remember him from the disaster flick Force Majeure, the excellent Swedish film from 2014 that was one of my favorite films that year. He shows excellent promise as a leading man; although there isn’t much chemistry between him and Salt.

The American ops are oozing testosterone, particularly Salt and McArdle, the latter of whom is a loose cannon that would never qualify for an elite black ops team. In fact given their reactions throughout the film it is clear that they are reacting to advance the plot rather than as characters actually would. Someone who works on a team for which things can go horribly wrong has to be cool, collected and think rationally on their feet; it’s clear that none of the military characters in the movie are capable of that which is a rookie writing mistake. One needs to research their characters before putting pen to paper.

That’s not to say that The Chamber doesn’t have entertainment value. While none of the situations are particularly innovative, there’s something about a rising water level and a diminishing amount of oxygen that puts the viewer right on the edge of their seat. Parker doesn’t do a bad job keeping the thrills coming and although he has a bit of a learning curve to get through there is definitely potential there. I’d call this a respectable effort and let you decide if this is the type of movie you want to spend some time with – it’s barely an hour and a half long – by all means do.

REASONS TO GO: Kuhnke is a fine leading man. The movie gives a very claustrophobic feel which is perfect for the tone.
REASONS TO STAY: There are a few too many clichés. There’s a little too much macho posturing for my tastes.
FAMILY VALUES: There is some violence and profanity.
TRIVIAL PURSUIT: This is the first movie score to be composed by James Dean Bradfield of the Manic Street Preachers.
BEYOND THE THEATER: Amazon, Google Play, Vudu, YouTube
CRITICAL MASS: As of 2/25/17: Rotten Tomatoes: 36% positive reviews. Metacritic: 40/100.
COMPARISON SHOPPING: The Abyss
FINAL RATING: 6/10
NEXT: Concert for George