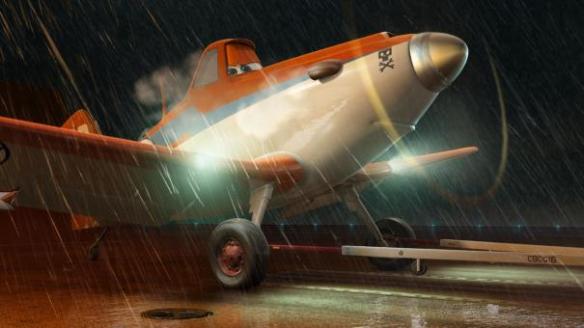 The latest Disney animated feature is a spin-off from the animated world of anthropomorphic Cars although it takes place above that world. Welcome to the shiny aerial world of Planes.

Dusty Crophopper (Cook) is a crop-duster, a single-engine plane who was built for the specific purpose of spreading pesticides and manure on crops (mostly corn, which is apparently the source of fuel in the world of Planes). Dusty want more out of life – “I’ve flown thousands of miles and never gone anywhere” he complains.

What he really wants is to be a racer, and the Wings Across the Globe race is the perfect outlet for him. With the support of his friends Chug (Garrett) and Dottie (Hatcher), Dusty trains relentlessly and even though he gets a lot of skepticism and negativity thrown his way, he perseveres. He gets into the race where he is befriended by Bulldog (Cleese), a obsequious Spitfire, Ishani (Chopra) a lovely Indian and the would-be ladies man El Chupicabra (Alazraqui).

Not everyone wants to succeed. Ripslinger (Smith) is gunning for his historic fourth consecutive win i the race and nothing and nobody will get in his way, particularly a crop-duster with delusions of grandeur. As it turns out, Ripslinger will go to any and all lengths to nail down that win and if it means that some planes must crash and burn, well….

Although this is based on a Pixar movie, this actually isn’t a Pixar film, even though John Lasseter co-wrote and produced it. No, it was animated by the wizards at DisneyToons, their direct-to-video arm and that was the intention for this as well. However, the stars aligned nicely for Planes – a planned King of the Elves feature shut down and somebody noticed the merchandising potential of the new characters, thus it was added to the theatrical release schedule a bit late in the game.

Quite frankly, I expected direct-to-video quality and I was somewhat surprised when I found this comparable to Pixar’s work in Cars and its sequel. There are a lot of clever little asides (such as the plane-looking rock formations near Propwash Junction where Dusty, Chug and Dottie reside. There are also air traffic controllers at Kennedy Airport who talk with JFK-esque accents, and German planes drinking fuel from beer steins.

There also isn’t much in the way of story and characterization which cobble elements from …well nearly every animated feature of the last 20 years. Skipper (Keach), a crotchety old war hero, is a dead ringer for Paul Newman’s Doc Hudson, El Chupicabra makes a nice Puss in Boots (albeit not quite as cute) and Dusty could easily be the title character from Turbo. In fact, most of the characters are pretty bland, generic characters you’ve met before in other movies. As for the plot, well, this isn’t the first movie that tells us that it’s okay to dream big because if we want something bad enough and have the support of our friends, we can accomplish anything.

I did like the overall charm of the movie and I will venture to say that if you compare this to most direct-to-video fare this is miles and miles ahead of those. Frankly, this deserved the theatrical release it got – it certainly isn’t as bad as some of the other animated features out there that were always intended to hit the theaters (I’m looking at you, Planet 51. Hop and Astro Boy).

REASONS TO GO: Maintains the goofy charm of Cars. Clever in places.

FAMILY VALUES:  Suitable for everyone – there’s a bit of semi-rude humor and a couple of action scenes that might scare the kids a little but nothing I wouldn’t feel comfortable sending an 3-year-old to.

TRIVIAL PURSUIT: Bravo and Echo, two Air Force jets who Dusty runs into during his around the globe race, are voiced by Val Kilmer and Anthony Edwards who played fighter pilots in Top Gun; their flight helmets are identical to those worn by the actors in their live action roles.