The thing about animation is that it is truly universal. Once dominated by one country – and essentially one studio – these days, great animation is coming from all around the globe. While Disney continues to be the 1,000 pound gorilla when it comes to animated features, there have nonetheless been some terrific films coming from elsewhere.

This new French animated feature from Benjamin Renner, the guy who gave us Ernest and Celestine, is definitely on the terrific side – for the most part. Three tales are presented here, all involving animals who don’t act like you might expect them to. The first involves a stork tasked with delivering babies, but the stork is a lazy sort and fakes an injury to get a passing duck, rabbit and a pig. The three try their best but they aren’t really cut out for that kind of work. The second involves a fox who is trying to steal some eggs to eat from a rather violent hen. The fox takes too long to eat them and they hatch. Rather than eat the chicks, he becomes their caregiver – which isn’t easy to do with an angry hen and a murderous wolf on the loose. Finally the third tale involves the rabbit, the duck and the pig who believe they’ve accidentally killed Santa Claus and determine to make sure that the presents are delivered. As in the first tale, that doesn’t go well either. Personally, I liked the second tale the most of the three but all three of them are good. They use a stage show framing device which is reasonably clever.

The animation is kind of a throwback, hand-drawn and 2D rather than computer generated 3D. It looks vivid and minimalist and is gorgeous and fun. The humor has a Chuck Jones/Tex  Avery influence that is delightful; adults may appreciate it a little more than the kids do, although I think kids will love it too. What is also worth looking out for is the warm, sweet charm that infuses the whole movie; it’s perfect rainy day viewing and if you’re not already a kid, it may bring you back to your own childhood.

There are a few things on the negative side to consider as well; The subtitles, which are in white, are hard to read whenever the background is white or a lighter color which is a problem. There’s been no word as of yet whether GKIDS will release a dubbed version as they did with Ernest & Celestine; I’m betting that they will. The film is clearly meant for younger viewers and some of them may be less proficient at reading and may not do well with subtitles. If a dubbed version had been available, I likely would have given this at least a full point higher rating, maybe even two.

Also unlike E&C the story feels a bit dumbed down in places. I got the sense of being talked down to by the filmmakers, a sense I never got in the previous film’s case. That was a bit disconcerting. However, those cases were fairly rare; most of the time I just let the craziness wash over me like a comfortable afternoon in my PJs watching Looney Tunes on the television with a big bowl of Cocoa Puffs in front of me. Now, that is what true happiness is.

Please note that this film is still on the Festival circuit and although it does have a distribution deal with GKIDS, no release date is currently scheduled. You’ll just have to keep an eye out for it at your local film festival or animation festival. Also while I did discuss an English dubbed version, no such version currently exists to my knowledge and GKIDS hasn’t confirmed that there will ever be one. Just so you know. P.S. I’d also like to give a shout-out to GKIDS who have put together an impressive roster of animated features from around the globe that will appeal to adults as well as kids. If you see their logo on anything, you know it’s going to be extremely high quality.

REASONS TO GO: There is a Looney Tunes quality particularly in the first vignette. There is a quality of sweetness throughout.
REASONS TO STAY: The subtitles can be hard to read. The story is on the dumb side.
FAMILY VALUES: There is some mild rude humor.
TRIVIAL PURSUIT: The middle tale was made up by Renner when he was a child; he eventually turned it into a graphic novel from which the film is adapted.
CRITICAL MASS: As of 6/2/18: Rotten Tomatoes: 100% positive reviews: Metacritic: No score yet.
COMPARISON SHOPPING: Zootopia
FINAL RATING: 6.5/10
NEXT: The Guilty 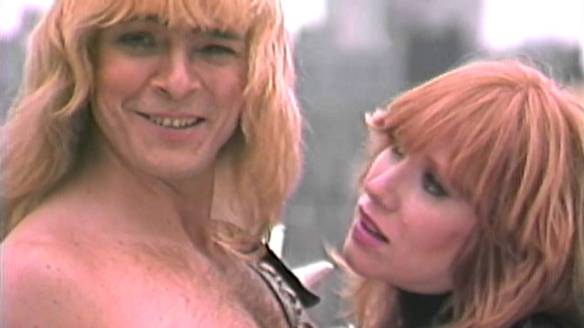 It’s good to be Thor.

Some of our rock gods live in palaces, Taj Mahal-like and florid. They are truly Gods among men, regal and unlike us mortals in every way. We aspire to their greatness for they are great indeed, touching millions of lives in different ways. Then again, some of our rock gods live in trailer parks. They scrape and struggle to get by, trying to bring their music to the masses and somehow, failing. It isn’t always because their music isn’t up to snuff; sometimes it’s bad decisions or just plain bad luck.

Jon Mikl Thor is one such rock god. In the 1970s, he took up bodybuilding and as a baby-faced blonde youth, he showed some promise. What he really wanted to do was entertain however, and so he went to Las Vegas where he starred as a nude waiter in a Vegas revue – until someone with a bigger package took his spot.

So Jon picked himself up, dusted himself off, went back home to his native Canada and put together a band. I mean, doesn’t everybody? The strange thing was, this band had talent. They had potential. They had a contract with RCA in Canada. The band called itself Thor, after Jon’s onstage persona. And on the eve of their debut album release, a dispute erupted between the record label and the band’s management company. And in the middle of all this, Jon disappeared. Indeed, he was kidnapped – or at least he says he was and while perhaps you might be skeptical as you see him discussing this early on in the documentary, as the film wears on you come to believe that Jon Mikl Thor is a lot of things but he isn’t a liar.

This incident alone could have sustained a documentary but Wise, who followed the band for 15 years, instead focuses on the band’s attempts to break out into mainstream prominence. In many ways, it’s a heartbreaking portrait of a man on a mission who at every turn sees his mission prevented. And the hell of it is, Thor is actually a pretty damn good band. They actually deserve to have some fame, and yet it eludes them. That doesn’t mean that Jon and his bandmates have given up on the dream, or more importantly on themselves.

Now on the over side of 60, Jon continues to chase the rainbow of success. He keeps up a cheerful and optimistic attitude, perhaps to the point where he might be considered delusional. I have to admit that at first, I thought he had a problem distinguishing reality with desire, but the more I got into the movie, I began to realize that he still believes in the dream and knows full well the uphill battle he’s fighting. He also understands the inherent ridiculousness of a man putting on fake armor and battling fake monsters onstage.

Indeed, Thor is an engaging and charismatic guy. Not only does he have plenty of onstage presence, enough to grab the attention of a gigantic rock festival crowd, he also is humble and likable offstage (which is his Canadian heritage showing, eh?) which helps make this a fascinating view. I had no problem spending an hour and a half with Jon Mikl Thor and wouldn’t have minded hanging out with him for a much longer time.

Thor’s live show is, even by metal standards, something to behold. Many of Thor’s bodybuilding feats are displayed, from blowing up a hot water bottle through his own lung power until it explodes, to bending steel bars to having concrete blocks broken on his chest. Thor is an impressive entertainer and he is canny enough to surround himself with some superb musicians, particularly Price and Favata.

I have to admit that while I like heavy metal and listen to it from time to time, I’m not much of a fan and while I was semi-aware of who Thor is, I didn’t really expect much from this documentary. Indeed, I was pleasantly surprised that this is not only entertaining but poignant. You end up rooting for a man who seems to be a genuinely nice guy who’s had more than his share of bad  breaks. Against all odds, I became a fan which is a difficult achievement for any band these days given how many bands I’ve heard in my misspent days as a rock critic and since as a listener. So, rock on God of Thunder. Long live Thor!

REASONS TO GO: Thor is an engaging and charismatic personality. A look behind the trailer park of rock and roll.
REASONS TO STAY: Heavy metal isn’t for everyone.
FAMILY VALUES: Some foul language.
TRIVIAL PURSUIT: During his bodybuilding days, Thor once finished as runner-up in a bodybuilding contest to Lou Ferrigno.
CRITICAL MASS: As of 6/1/15: Rotten Tomatoes: no score yet. Metacritic: no score yet.
COMPARISON SHOPPING: Paul Williams: Still Alive
FINAL RATING: 7.5/10
NEXT: Cartel Land