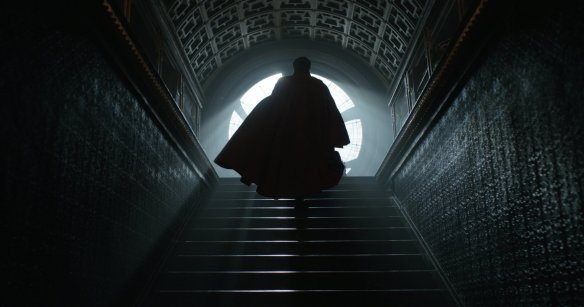 Renowned neurosurgeon Stephen Strange has everything going for him; a thriving practice in Manhattan, a beautiful girlfriend, wealth and privilege. All of that vanishes in an instant when a tragic car accident severely injures his hands and ends his career as a surgeon. Bitter and directionless, he discovers a larger world, one of mystic powers and strange artifacts. That world is under siege by a remorseless villain; Strange, a novice at the mystic arts, must put aside his ego and take up the mantle of Sorcerer Supreme if he is to save the world.

See the trailer, interviews, a featurette and B-roll video here.
For more on the movie this is the website.
Release Formats: Standard, 3D, IMAX 3D
Genre: Superhero
Now Playing: Wide Release
Rating: PG-13 (for sci-fi violence and action throughout, and an intense crash sequence)

(Summit) Andrew Garfield, Sam Worthington, Teresa Palmer, Hugo Weaving. This is the incredible but true story of Private Desmond Doss, an army medic during World War II who believed that while the war was a just one, killing was nonetheless wrong. He refused to abandon his principles and while he enlisted to do his bit while his beliefs got him labeled a coward by his fellow soldiers. Nonetheless he went into battle without a weapon and pulled the wounded from behind enemy lines despite extreme danger to himself. He remains the only conscientious objector to win the Congressional Medal of Honor.

(Magnolia/Amazon) Min-hee Kim, Tae-ri Kim, Jung-woo Ha, Jin-woong Jo. This twisted romance from acclaimed South Korean director Chan-wook Park is set in the 1930s and is about a handmaiden who is employed by a beautiful Japanese lady. What the lady doesn’t know is that her handmaiden is secretly involved in a plot to defraud her.

See the trailer and a clip here.
For more on the movie this is the website.
Release Formats: Standard
Genre: Drama
Now Playing: Enzian Theater
Rating: NR

(Cinedigm) Trace Adkins, Michelle Harrison, Kim Coates, Judd Nelson. A former stagecoach robber, reformed and trying to live a quiet, peaceful life, is pursued by a vengeful U.S. Marshall who was maimed during a gunfight with the ex-criminal.

See the trailer and a clip here.
For more on the movie this is the website.
Release Formats: Standard
Genre: Western
Now Playing: AMC Loew’s Universal Cineplex
Rating: NR

(DreamWorks Animation) Starring the voices of Justin Timberlake, Anna Kendrick, Zooey Deschanel, Russell Brand. In the colorful world of trolls, happiness and optimism reign until the troll village is invaded by hungry Bergens who carry off all the villagers save two – Poppy and Branch, the former the most upbeat troll who ever lived, the latter a curmudgeon who prefers to be left alone. The two mismatched trolls must learn to work together in order to save Poppy’s friends.