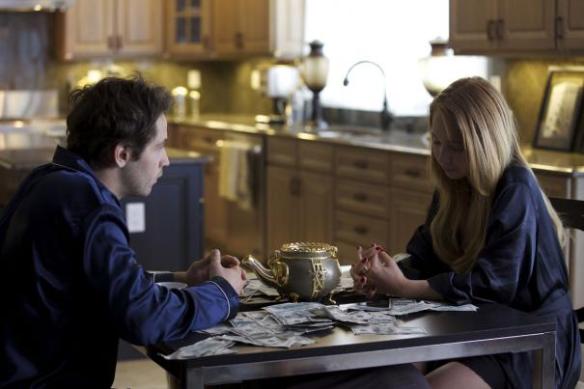 I don’t think there’s a person alive who hasn’t had a wish-fulfillment dream – a dream where their most fondly imagined wishes are made to come true. Sometimes it comes in the form of a Lottery win, or of an inheritance – most of our actual real world dreams generally come with real world fulfillments. But then again, would anyone turn down a magic lamp….or teapot?

Alice (Temple) and John (Angarano) are a couple with more love than money. Alice is recently unemployed and John works at a crap job that he can’t stand – one in which he is hoping for a promotion from a boss who spouts meaningless aphorisms that motivate John not even a little bit.

They live hand to mouth and whenever the rent is late, which it is often, Alice must put up with the brutish come-ons of landlord Arnie (Magnussen). While driving to visit Alice’s parents, the two are involved in a car accident when they are t-boned at a rural intersection. While John sorts things out, Alice wanders into a neighboring antiques store and finds hidden away a teapot. Impulsively she decides to take it and as it turns out, their car was drivable so they drive away.

When John discovers what Alice has done, he is disgusted; “We’re already two steps above white trash as it is.” He doesn’t ask her to take it back however and the continue on to dinner where they get put down by both Alice’s parents, her sister (Monk) and brother-in-law (McBrayer) who are those smug conservative Christians that drive most liberals crazy.

The next day, John is back at work but not for long – he’s being laid off. Fortunately for him, Alice is finding out something about the teapot – anytime pain is experienced anywhere near it, the pot produces hundred dollar bills. Lots of them depending on the severity of the pain. She spends much of the afternoon beating herself up – literally – until John arrives. At first incredulous, he is soon motivated to join the party.

John knows they need the cash but he is concerned about the price to be paid and makes Alice agree that they won’t let this brass teapot take over their lives and when they’ve made enough, they’ll stop. She readily agrees.

They’re able to start buying new things but before long they receive a visit from a pair of Hassidic Jews who beat the crap out of John and steal the proceeds from the teapot. Apparently it was their mother whom Alice stole the teapot to and she’d recently passed away. Not long after that the two get a visit from Dr. Li Ling (Park), a patient Chinese expert on the teapot who warns them that the teapot can destroy them and that the only way to save themselves is to give it to them.

They have no intention of doing that however and continue to discover new things about the brass teapot, including that mental and emotional pain can trigger cash as can the pain of others. Soon they have enough to buy a mansion near new neighbor and former high school rival Payton (Bledel). However, things begin to take a turn for the worse. Arnie finds out about the Teapot. John becomes increasingly worried that Alice has become obsessed with it and won’t be able to give it up when the time comes. It sure looks like Dr. Ling’s worst prognostications are coming true.

This is Mosley’s first feature after a sterling music video career and it’s pretty solid. Writer Tim Macy has developed a pretty solid mythology behind the teapot which gives it a solid footing. I like the imaginative concept although the execution of it really didn’t utilize it properly. The equation of pain and wealth sounds on the surface like a commentary on our materialistic society.

Macy and Mosley don’t really do that though. Mostly this is a comedy of creative ways to hurt yourself which wears a little thin by the end of the movie. Fortunately, there’s a pretty solid cast to keep your attention even when the vignettes lose their luster. Temple, one of the most engaging up-and-coming actresses today, has a good comic timing, something I wasn’t aware she was known for. Angarano has made some missteps in his career but is slowly emerging as a talent of his own.

The important thing is that the chemistry between Temple and Angarano is genuine. The movie doesn’t work if you don’t sense the love between John and Alice but that emotion is clearly there. Even when they appear to be drifting apart there is still that connection – that’s why you continue to root for them even though they’ve done such disagreeable things. You also get that these are people made desperate by an economy that failed them.

The denouement is pretty interesting and doesn’t particularly come out of left field. I would have liked to have left this film with a bit more thought regarding the value of the pursuit of wealth and its effect on the human soul. The Brass Teapot doesn’t particularly add anything to that particular conversation, which is a bit of a shame but then again it doesn’t necessarily have to. As entertainment, the movie delivers which is really all you can truly ask of it but a little something extra would have been nice.

REASONS TO GO: Quirky sense of humor. Nice fantasy environment without a lot of special effects.

REASONS TO STAY: A bit mean-spirited. Some of the self-inflicted pain is bit squirm inducing.

FAMILY VALUES:  There’s a bit of violence, some sexuality, some drug use and a fair amount of bad language.

TRIVIAL PURSUIT: Screenwriter Tim Macy also wrote the short story that the movie is based on.