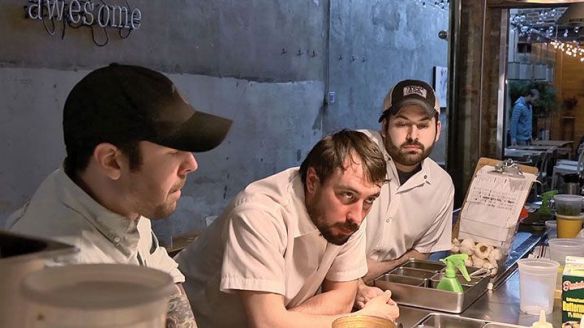 It is said that the second hardest thing to do in the small business realm is to open up a new restaurant. The hardest thing to do is keep it open. As most people are aware, restaurants come and go with almost a terrifying regularity. People tend to be fickle and may pack your eatery one day and the next day be on to the new flavor of the week. Banks are very loathe to give out small business loans for that reason, particularly for would-be restaurateurs with no track record.

One of the toughest markets for restaurants is the Washington DC area. This documentary follows two men with very different concepts and very different hopes; one is Aaron Silverman, a chef with a pedigree that has brought him under the tutelage of some of the best in the business, including Michel Richard (who sadly passed away shortly after filming concluded for New Chefs on the Block). He had an idea of a five star dining experience at two star prices. In order to accomplish that he loaded up his kitchen with experienced chefs.

He also gave his staff health and dental benefits (a rarity in the food service industry) and regular hours, giving them the ability to plan their lives. This is also revolutionary stuff in an industry well-known for creating personal life chaos. Silverman is something of a perfectionist and the price it would take to make his dream happen was a heck of a lot more than the second chef.

Frank Lynn (who in the interest of transparency is the brother-in-law of the filmmaker) had been operating a successful pizza-oriented food truck for two years and yearned to have a brick-and-mortar location to call his own. He found one in the Maryland suburbs of DC but the space would need some extensive work. Believing that the $86,000 he raised through family members and Crowdfunding would be more than sufficient to get his neighborhood pizzeria open, he set about remodeling his space mainly with the help of his family and friends.

Both project take longer than expected to reach opening night and both are fraught with issues that threaten to kill the dreams of their prospective owners before they even get started. We see pretty much everything; the process of getting permits, the physical construction, ordering a pizza oven that turns out to be defective, the compromises and calamities all told.

Many restaurant owners are going to see this and chuckle ruefully to themselves. Others who are thinking about opening a restaurant might turn white as a sheet. However, the cautionary tale is that Harrison-Atlas turned out to be extraordinarily lucky; most restaurants don’t make it to their first anniversary and the number that make it to their second is terrifyingly low. Still, this is a fascinating behind the scenes look at how your neighborhood restaurants came into being. That the two owners are engaging and charismatic fellas makes this a lot more palatable because some might find the somewhat clinical view of the start to finish process a bit of a slog. However I assure you that you’ll leave the theater (or your home couch if you are watching through streaming or home video) a little bit more educated about the business and, even more likely, craving something good to eat.

REASONS TO GO: An informative look at what goes into opening a restaurant. A rooting interest is maintained even when the expectations aren’t realistic.
REASONS TO STAY: Might be a little bit too “nuts and bolts” for some.
FAMILY VALUES: There’s some profanity occasionally.
TRIVIAL PURSUIT: Rose’s Luxury would go on to win the James Beard award for Best New Restaurant, Mid-Atlantic Region in 2014.
CRITICAL MASS: As of 5/10/17: Rotten Tomatoes: No score yet. Metacritic: No score yet.
COMPARISON SHOPPING: King Georges
FINAL RATING: 7/10
NEXT: A Quiet Passion