Spider-Man is torn between two worlds.

One of the biggest news stories in the Marvel Cinematic Universe in the last couple of years was the deal between Columbia and Disney that allowed Spider-Man to finally be part of the MCU. While he made his first appearance in the essentially Avengers tale Captain America: Civil War last year, Peter Parker (Holland) a.k.a. Spider-Man gets his own movie and thankfully it’s one of the very best of the franchise.

Holland is the third actor to play the webslinger after Tobey Maguire and Andrew Garfield both tried their hand at it and in many ways he’s much closer to the comic book original than either Maguire and Garfield who both had a bit of a swagger to them. Holland is a more humble Parker and while he has a bit of a smartass quip-oriented style, he still has a lack of self-confidence that manifests in his unrequited crush for fellow Scholastic Academic Bowl teammate Liz (Harrier).

He gets the benefit of having Keaton as the big bad, The Vulture a.k.a. Adrian Toomes. Collecting alien tech after helping with the clean-up of New York City following the Chitauri invasion of the first Avengers movie, When an unctuous city official (Daly) kicks him off the project leaving his business high and dry, he instead uses the tech to create weapons to help him steal further tech that allows him to develop weapons for criminals.

Parker is aided by Tony Stark (Downey) a.k.a. Iron Man who essentially sees him as a kid who is just learning his way through his powers – which is an accurate enough assessment – but fails to take into account Parker’s heart and will to contribute. The relationship between the two is strained but the two actors have a chemistry which makes it fun whenever the two are onscreen together. Eventually despite having the enhanced spider-suit taken away from him (that Stark gifted him with in the first place), Parker shows his mettle as a hero and proves his place in the Marvel Cinematic Universe.

The action set pieces can be CGI-heavy although some of them are pretty impressive, particularly one on a Staten Island Ferry and another one in an abandoned factory. This is thankfully not an origin story (there have already been two of them) but we still get Spidey at a nascent point in his career as a crimefighter. That was a wise choice. We see Parker as a high school kid; this is before he heads off to be a photographer at the Daily Bugle or a college student at ESU. That’s a good place to start him off.

Tomei plays a different kind of Aunt May. In the comics and in the movies, we’re used to seeing an elderly May (although Sally Field’s version was a bit younger in the Garfield iteration than Rosemary Harris in the Maguire version) but here she’s a hottie. The dynamic between May and Peter was always a central one in the early comic books; I would have liked to have seen it developed a lot more here but there are always future sequels.

Despite a couple of missteps this is a very fine addition to the MCU and certain to keep fans happy and waiting for further appearances in the MCU by Spider-Man which should begin with the upcoming Avengers: Infinity Wars feature next year. This is the closest that the movies have come to nailing the comic book Spider-Man onscreen and I for one are happy that they did.

REASONS TO GO: Holland gives maybe the best portrayal of Peter Parker to date. Spider-Man is brought neatly into the MCU. The relationship between Parker and Stark is fun. The movie that is closest in tone to the comic book yet.
REASONS TO STAY: There’s a little bit of CGI overload. I would have liked to have seen more of Aunt May.
FAMILY VALUES: There are all sorts of profanity, violence, sexuality and occasional drug use.
TRIVIAL PURSUIT: Originally Samuel L. Jackson as Nick Fury was going to play Peter Parker’s mentor but the producers decided to go with Downey/Stark instead. Also, J.K. Simmons was in talks to reprise his role as J. Jonah Jameson from the Sam Raimi trilogy but he opted to go with Commissioner Gordon in the DCEU instead.
BEYOND THE THEATERS: Amazon, Fandango Now, Google Play, iTunes, Vudu, YouTube
CRITICAL MASS: As of 11/25/17: Rotten Tomatoes: 92% positive reviews. Metacritic: 73/100
COMPARISON SHOPPING: Weird Science
FINAL RATING: 8/10
NEXT: Dunkirk 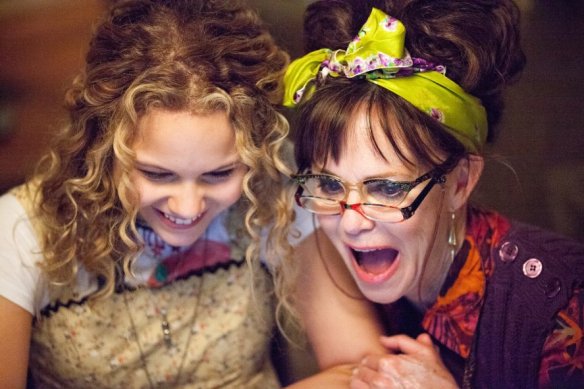 Doris Miller (Field) has just buried her mother, whom she has spent much of her adult life taking care of. Doris is a bit eccentric; she dresses like a bag lady being played by the love child of Michelle Pfeiffer and Cher and kind of walks her own path. Her brother (Root) and sister-in-law (McLendon-Covey) urge her to sell the house, which they have ulterior motives for, but she’s not inclined to do so. Doris has lived here all her life and sees no reason to find a new place to live, even though her commute from Staten Island to midtown Manhattan is grueling.

At the firm where she works in the accounting department, she gets on an elevator soon after the funeral with the handsome new art director, John Fremont (Greenfield) – not the general who left his mark on California maps. And wouldn’t you know it, she develops a huge crush on the much younger man.

Doris hasn’t exactly had a whole lot of romantic experience, most of her free time revolving around the care of her mother. So she approaches her best friend Roz (Daly) who steers her to her 13-year-old granddaughter (Acres) who helps Doris set up a fake Facebook account so she can keep tabs on her new beau. Of course, she ends up creating havoc in his life, especially when she gets jealous of his new girlfriend Brooklyn (Behrs). But that isn’t all that’s changing; some of John’s hipster friends are discovering that the quirky Doris is the new kind of cool. She even poses for an album cover; but are her new friends driving Doris away from her old friends? And are her new friends more bent on hanging out with the new flavor of the week rather than genuinely interested in her?

There are a few not-so-subtle undertones here, mainly in how we look at the aged. Field is no spring chicken but she carries herself with a great deal of charm and comes off as so likable that even when she’s engaging in creepy stalker behavior you still end up liking her. But in a lot of ways, her character is kind of a cliché eccentric old woman who is so out there that she fits in with the hip millennial crowd. I found that it was a little bit condescending in that Doris has to dress like a mannequin found in a Mad Max movie and literally throw herself at a younger man to get him to be interested in her. There are plenty of young men who are into older women out there; why does an actress the caliber of Sally Field have to debase herself in order to have a relationship between a younger man and an older woman seem viable?

There are plenty of cliches of the indie variety from the New York location (albeit a lot of it takes place outside of hipster heaven Manhattan and hipster other heaven Brooklyn) to the soundtrack to the pretentions of the mainly artistic people portrayed here. There are a few things that kind of break the mold – the dialogue, for example, is clever but not overly so to the point that it doesn’t sound like real people talking, a very major indie sin.

The film also has something positive that’s a mite rare these days – a delightful ending. Yes, the movie actually ends in a way that is both satisfying and organic. I wish a lot more movies gave the kind of thought to their ending the filmmakers here obviously did with theirs. You think for a moment the movie is going one way and then – it doesn’t. Kudos to the writers for that.

There is definitely a good deal of entertainment value here. Field clearly still is at the top of her game and I hope that with some good roles starting to appear for women in her age range that we’ll see more of her on the big screen in the coming years. I only wish the movie hadn’t treated the romance between the older woman and the younger man as something ridiculous; certainly they wouldn’t have if the relationship had been between a 60-something guy and a 20-something woman. As a society, we seem to be okay with one and not with the other. There’s a good documentary in the exploration of that double standard somewhere.

REASONS TO GO: Field is still intensely likable. A very satisfying ending.
REASONS TO STAY: A little bit condescending and cliché. I think the May-December romance should have not been a source of ridicule.
FAMILY VALUES: There is enough profanity to merit an R rating.
TRIVIAL PURSUIT: Lyonne and Greenfield both appear in the sitcom New Girl.
CRITICAL MASS: As of 3/18/16: Rotten Tomatoes: 84% positive reviews. Metacritic: 62/100.
COMPARISON SHOPPING: Harold and Maude
FINAL RATING: 6.5/10
NEXT: Chasing Mavericks