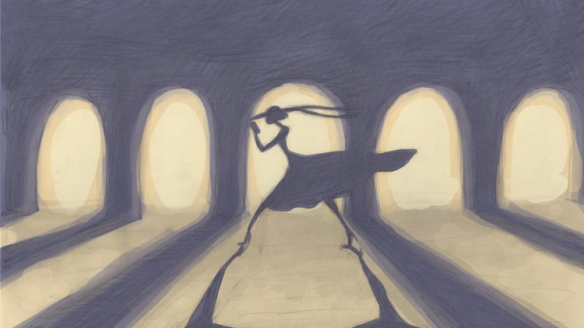 Love is an odd duck. Love turns to hate in the blink of an eye and so much of it is based on the perception of the other person and our perception of their behavior. That perception can easily be altered or fooled, and in that case, is that love and/or hate truly with the person or with the way we think they are?

The two fall instantly and madly in love and get married. At first, Jake is crazy about Ella and when he’s not pounding the sheets with her, he’s bringing her flowers and otherwise doting on her. When a jealous admirer doctors up a photo to make it appear that Ella has been cheating on him, the big lug is heartbroken and decides that what’s sauce for the gander is sauce for the goose. He finds a seedy hotel in the center of town and begins to have at it with every woman he can find – and he can find plenty.

At first Ella doesn’t understand the distance that has become her and Jake. When she discovers the truth, her reaction is a bit more extreme than Jake’s – she hires a contract killer to snuff him. Hell hath no fury and all that. However, by chance she stumbles upon a disgraced stage magician’s signature invention – a soul switching machine. In that way, she is able to switch bodies with the ladies who are dallying with her husband before switching back with Jake none the wiser. It’s not an ideal situation but it’s about to get a whole lot less ideal.

Plympton is one of the most marvelous and original animators of our time. He utilizes a good deal of grotesquerie in his style, which began as a print cartoonist for such publications as Playboy and the National Lampoon. While he is primarily known for his shorts, this is actually his sixth feature and his first to utilize Kickstarter as a means of raising funds.

He sets this tale in an indeterminate time but looks to be post-World War Two America, with big cars prowling the endless roadways, rubes wearing fedoras at the county fair and the attitude towards and between the sexes.

What I like most about Plympton is his ability to see the outrageous and the grotesque about everyday things. He has a wicked sense of humor and this new feature was no exception to that style. Plympton also rarely uses dialogue and once again, the dialogue consists of grunts, moans, squeals and sobs. I imagine he would side on the “pictures” side of thing in the Words and Pictures debate but with Bill Plympton, a picture is truly worth a thousand words.

He draws each of the approximately 20,000 animation cells by hand which is a laborious and time-consuming process and while that necessitates a somewhat spare style, he still uses it to great effect. There are even sequences where he gives homage to fine art and utilizes a variety of drawing styles throughout.

The plot is a little thin which even for a movie that barely scrapes over an hour could have used some punching up. Considering this is his first feature in five years, you’d think he’d have had time to flesh out his story some but then he has also been continuing to create his hand-drawn shorts in that time, and let’s face it everything that he cranks out is a gift.

There’s plenty of sex and violence, as well as subversive humor so don’t think about bringing the kiddies to this one – most of it will sail over their heads and some of it is inappropriate for the DisneyToons set. At the moment this is out and about on the Festival circuit and as with most of his features, I’m sure that a home video release is in the cards. While this isn’t his best feature ever, it is still better than most of the stuff cranked out by the big studios and more fun for us big people by half.

REASONS TO GO: Plympton’s trademark humor.  Varies his style enough to be interesting.

FAMILY VALUES:  Some semi-disturbing images and adult themes. Definitely not for the kiddies.

TRIVIAL PURSUIT: Plympton has been nominated for two Oscars for his animated shorts Guard Dog and Your Face.