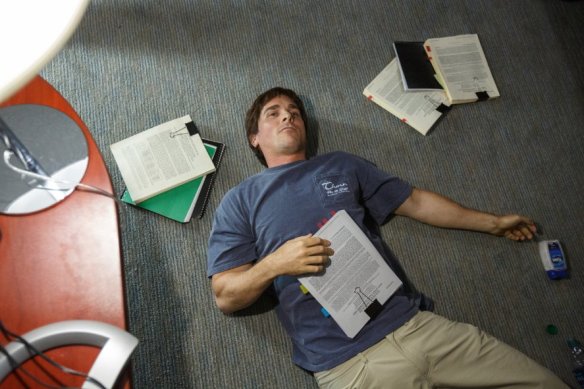 The financial meltdown of 2008 was the worst economic event since the Great Depression. Millions lost their jobs and their homes. The repercussions of that event continue to be felt, but many don’t understand how it happened – and how it could happen again.

Dr. Michael Burry (Bale) is a one-eyed manager of a small hedge fund in San Jose, California who discovers that securities based on mortgages – once thought to be nearly recession-proof as the going wisdom is that most people pay their mortgages on time – are actually filled with mortgages that are much riskier, with balloon payments that will commence in 2007 that the homeowners will never be able to pay and create an economic meltdown. He wants to essentially bet against these securities as he knows they are doomed to fail; such securities don’t exist so he goes to Wall Street to places like Goldman Sachs to have them create those securities. He is nearly laughed out of the building but they are happy to take his money – in fact, nearly all of his fund’s cash which doesn’t sit too well with some of the investors.

Mark Baum (Carell) is also a hedge fund manager based at Morgan Stanley who has an anger management issue (Baum, not Morgan Stanley). His team discovers from investment banker Jared Vennett (Gosling) – who also serves as the film’s narrator – that these securities exist and that there’s a good chance that investing in these securities will result in runaway wealth. Baum, who has a hate on for the industry he works in, after talking to a number of bankers and securities industry insiders, becomes certain that Vennett is on to something and risks a good deal of his fund’s capital to buy these securities.

Two ambitious young Colorado-based hedge fund managers – Charlie Geller (Magaro) and Jamie Shipley (Wittrock) also discover these securities through happenstance but their fund is too small and too unknown to be able to get a seat at the table to bid on securities like that. They enlist Ben Rickert (Pitt), a disillusioned former Wall Street titan who has become something of a paranoid recluse, out of the game until Geller and Shipley manage to reel him back in.

All of these players discover first-hand the venal stupidity of the banking industry whose blindness led to the near-collapse of the world economy; the corruption and absolute greed that was behind that blindness staggered even these members of the same financial industry.

Based on a nonfiction book by Michael Lewis, the film takes some real-life people involved in the market (Burry) as well as creates fictional ones – some out of whole cloth and some based on others (Baum, based on real-life hedge fund manager Steve Eisman), McKay does a credible job in taking some fairly esoteric financial market concepts like CDOs and credit default swaps.

He has gathered an eclectic but solid cast that brings to life the arrogance and testosterone-infused world of finance. It is definitely a boys club with an aggressive attitude with an absolute focus on money. Carell gives Baum a moral compass – maybe more of one than the other characters in the film – but also an angry streak that comes from a family tragedy. In many ways, Baum is the most compelling character in the movie because while all of the characters have an agenda, Baum’s is more than just making money.

I also like Bale as the real-life Dr. Burry, who prefers to be barefoot, rarely wears a suit and tie, and blasts metal in his office when he’s stressing out. His characters is a little bit more complex than the others and we don’t really get a decent grasp on him, which something tells me is true of the real guy. Pitt brings a little bit of New Age gravitas here as well.

McKay is known for his comedies and there is a kind of black humor here. His tongue is often planted firmly in cheek as he uses various celebrities in incongruous situations to explain various things in the script (like a naked Margo Robbie in a bathtub explaining the subprime mortgage market, or singer Serena Gomez in a casino talking about CDOs) and we are told that certain things actually happened but more interestingly, that some things actually didn’t as depicted in the film. You have to give him points for honesty.

I imagine your political outlook will drive how much you enjoy the film to a certain extent; those who are fairly left-wing in nature and distrustful of industry will no doubt find this film much more to their liking than those who are right-wing and who might look at this as tarring an entire industry with the same brush because of the actions of a relative few. The Big Short takes the point of view that the stupidity, shortsightedness and corruption was industry-wide and implies to a large extent that the culture of the financial industry of the bro-tastic almighty dollar have a big hand in driving that corruption.

The Big Short does a credible job of explaining a fairly complicated and often confusing situation that brought the economy to its knees, and warns that many of the same factors remain in place that may yet again take the economy down for another plunge. It reminds us that despite the blatant fraud that took place, only one person – and he relatively low on the totem pole – ever was tried and jailed for his role in an event that created so much human misery. This is an outstanding movie that may disturb some because the “heroes” of the story made enormous profits from that misery (a fact pointed out by Pitt’s Ben Rickert) and that the tone overall is somewhat snarky. I found that the tone made the events somewhat easier to bear and while I don’t condone profiting from the pain of others, I can say that at least none of the protagonists broke any laws, which is a fairly low bar for cinematic heroism but given the industry depicted here, probably about as high a bar as can be expected.

REASONS TO GO: Really explains some of the very confusing information about the 2008 crisis well. Extremely solid performances from the cast. Occasionally funny.
REASONS TO STAY: A very dry subject matter.
FAMILY VALUES: Plenty of profanity, some nudity and sexuality.
TRIVIAL PURSUIT: This is the first film directed by Adam McKay in which Will Ferrell doesn’t star.
CRITICAL MASS: As of 1/10/16: Rotten Tomatoes: 87% positive reviews. Metacritic: 81/100.
COMPARISON SHOPPING: Margin Call
FINAL RATING: 8.5/10
NEXT: Point Break (2015)