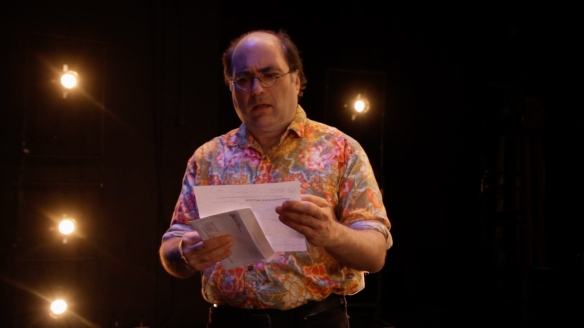 The art of the monologue is somewhat different than the art of stand-up comedy. The latter is joke after joke after joke; the former is a story, generally a humorous one. Louis C.K. is a stand-up comedian; Spalding Gray is a monologist. You’re far more likely to get rich and famous doing stand-up than you are reciting monologues, but that doesn’t stop plenty of people from going the latter route.

Based on a semi-autobiographical monologue by Josh Kornbluth who is shown performing it onstage enhanced by re-enacted portions of it, the cleverly titled film (Death and Taxes mixed with Love and Death, a Woody Allen – clearly a major influence on Kornbluth – film) shows Kornbluth who admits to his tax lawyer boss that he hadn’t paid his taxes in seven years.

To make this further ironic, Kornbluth works for a corporate tax lawyer (Keith) to pay the bills while he struggles to get his career as a monologist going. When Keith finds out that his employee hasn’t filed, he immediately sends him to a personal tax lawyer named Mo (Shumaker). Holistic and a bit New Age, Mo sees his failure to file not so much a tax problem as a tax symptom. Josh has memories of his father (Sicular), a testy communist, refusing to pay his taxes. A revelation, perhaps?

And filing his taxes seems to have helped Josh in many ways. He starts getting bigger crowds at his gigs. He gets the attention of a cheesy Hollywood producer (Shearer) who has Josh living in L.A. five days a week to write a screenplay in hopes that a studio will pick it up. He also gets the attention of a groupie named Sara (Overman) who is nearly as neurotic as himself, but in a complimentary way. Soon they are living together and talking marriage – particularly when Sara gets pregnant.

But Josh’s tax struggles are far from over and soon he finds himself in a bigger hole than he could imagine. Sure enough, things go from blessed to cursed in a big hurry. It’s a condition known to most of us as life.

Josh is a charismatic and engaging personality. He’s a cross between a Berkeley liberal and a Brooklyn Jew which makes for an interesting personality. He’s no matinee idol but he nonetheless keeps your attention whenever he’s onscreen, something that some matinee idols have trouble with. His stage sequences make you want to run right out and catch his act, which I suppose is what he was after all along.

While the movie could have used a little more editing (it drags a bit at the end of the second and beginning of the third act) it still doesn’t ever really wear out its welcome. It’s not the kind of film that is going to have you screaming with laughter but instead elicits a quiet chuckle – a whole lot of them, in fact. The interweaving of stage monologue and ensemble film sequences works well together, keeping the movie humming along for the most part. Sometimes there is a little too much shtick but by and large this is an entertaining and funny movie that is an improvement on Haiku Tunnels, the first film collaboration between the Brothers Kornbluth. I hope the two of them continue to make movies if they’re going to come up with stuff this good.

REASONS TO GO: The weaving of the stage monologue and the acted re-creations is nicely done. Josh is an engaging storyteller.
REASONS TO STAY: The movie runs a little bit too long.
FAMILY VALUES: There is a little bit of mild profanity as well as some mild sexuality.
TRIVIAL PURSUIT: This is adapted from a monologue that Kornbluth first staged in 2003 in San Francisco; he later refined it in the Sundance Theater Lab, San Francisco’s Z Space Studios and Washington DC’s Arena Stage.
CRITICAL MASS: As of 3/2/17: Rotten Tomatoes: No score yet. Metacritic: No score yet.
COMPARISON SHOPPING: The Producers (1967)
FINAL RATING: 7/10
NEXT: The Last Laugh