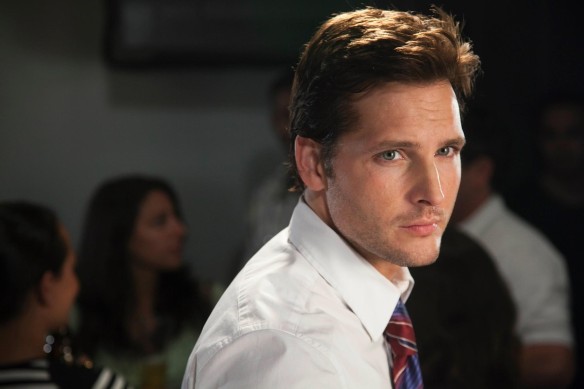 Sometimes people do the right things for all the wrong reasons. Just as often, people sometimes do the wrong things for the best of reasons. At the end of the day, it doesn’t really matter why you do things, just that you did them.

Bobby (Facinelli) is a handsome, charming kind of guy. He walks around New York in a suit all day, letting all and sundry know that he works on Wall Street as a broker. Actually, Bobby is a pickpocket and a damned good one. He snatches watches, cash, cell phones, the occasional police badge – whatever he can get his slick fingers on.

But things are changing in his life. Lucy (Alexander), the pretty and spunky bartender at his favorite tavern, is pregnant – and Bobby’s the baby daddy. What had been a one night stand turned into a life changing event. Bobby, at his core a decent sort of fellow, wants to do the right thing. He wants to marry Lucy and settle down into being a good husband, father and provider.

That’s not going to be easy. Bobby owes Jax (Gallo) a fairly hefty debt, the legacy of his gambling-addicted father and is struggling to pay it off. Lt. Nick Sullivan (Madsen), the cop whose badge Bobby stole, is absolutely pissed off about it and is pursuing Bobby with the ferocity and tenacity of a pit bull on meth. His mom Rita (Leone) has a new boyfriend, the jeweler Carl (Pantoliano) who has been known to exchange punches with Bobby. And Lucy doesn’t want to be the wife of a lowlife, nor her child to be raised by one.

This is meant to be a star-making vehicle for Facinelli who has labored in the shadows for much of his career. An engaging lead with star potential, he has been relegated mainly to supporting roles although when he’s gotten the opportunity to shine (as on the too-brief TV series Damages) he has generally made the most of it and he does so here.

Bobby is a thoroughly likable rapscallion and while his choice aren’t the best, they are generally the lesser of two or more evils. Facinelli imbues the character with a general charm, ensuring the audience will like the schlub even though they know he’s doing things that are less than kosher. Facinelli and Alexander make a believable couple; there are a lot of bumps in the road for their characters but one never doubts the genuine affection.

While this is a bit of a mash-up between a crime caper and a romantic comedy, I don’t really see anything fresh here from either genre. It’s a bit paint-by-numbers in a sense  that is elevated by the performance of its cast. Facinelli is engaging enough performer that you’ll want to spend an hour and a half with him without checking your watch. These days, that’s kind of a plus.

WHY RENT THIS: Facinelli is likable. Good chemistry with Alexander.

WHY RENT SOMETHING ELSE: Doesn’t really offer up anything new.

FAMILY VALUES: There’s a bit of violence, some sexual content and some rough language.

TRIVIAL PURSUIT: The husband of Nikki Reed, who co-starred with Facinelli on the Twilight series, contributes three songs on the soundtrack with his band Grand Magnolias (his name is Paul McDonald of American Idol fame).