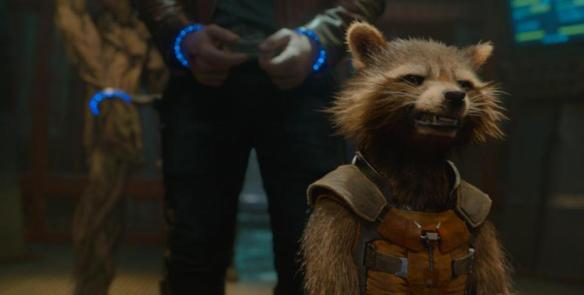 Just don’t call him Rocky…it pisses him off.

So what makes for a great summer movie? Is it spectacle? Over-the-top action? Bigger than life characters? A mix of comedy, pathos, drama and action? A movie that puts you in a place where you can relax and forget all your cares?

Marvel Studios, the cinematic arm of Marvel comics, has been dominating the summer market ever since they broke out with Iron Man back in 2008. Since then, it has been one blockbuster after another as they have successfully created a shared cinematic universe in a similar fashion to the one they developed for their four color division, keeping audiences invested in the goings on and eagerly anticipating the next film in the franchise. This year has been particularly successful for the Marvel brand, not merely in box office (although that is the bottom line for most studio sorts) but also by delivering what are arguably the two best films in the brand both in 2014.

After Captain America: The Winter Soldier utilized a ’70s-style political thriller as a kind of framework for a superhero movie that had repercussions across the Marvel cinematic universe (and greatly affecting the TV series Marvel Agents of SHIELD) the House of Ideas has taken a bold move; to center on a little-known group of heroes in a space opera setting that is the final stand-alone installment in Marvel’s Phase 2 before next year’s Avengers: Age of Ultron.

Peter Quill (Pratt) is an adventurer and thief who used to live on Earth before being abducted by a group of outlaws named The Ravagers on the night his mother (Haddock) passed away from cancer. Did I mention that the Ravagers are a group of aliens led by Yondu Udonta (Rooker)? Quill has more or less broken away from the gang and is on the deserted, lifeless and ruined planet Morag. As he jauntily dances his way through the ruins he eventually finds a nondescript orb, using high tech to capture the artifact in a nod to the Indiana Jones movies.

Turns out he’s not the only one who wants the Orb. A renegade Kree named Ronan the Accuser (Pace) needs the Orb which hides a devastating secret. He’ll stop at nothing to get it and sends Gamora (Saldana), an adopted daughter of Thanos (Brolin), a malevolent figure who has designs on ruling the galaxy. Ronan is merely insane, akin to a religious terrorist who means to impose his version of morality on the Galaxy which begins with exterminating the planet Xandar, home of the Nova Corps who have signed a treaty with the Kree’s ancient enemies the Skrull as well as with the Kree themselves. Ronan will not tolerate this and needs the Orb to exact his version of justice.

Yondu also wants the Orb to get the massive pay day that’s being offered for it but Peter is making his own deals these days, so Yondu sets a bounty on Peter’s head. A pair of disreputable bounty hunters, a genetically modified raccoon named Rocket (Cooper) and a humanoid tree named Groot (Diesel) who only speaks three words and in the same order every time – “I Am Groot,” want Peter and the Orb so that they can get paid.

Then there’s Drax the Destroyer (Bautista) who doesn’t want the Orb or Peter – he wants vengeance on Ronan who murdered his entire family. When he espies Gamora battling Peter for the Orb, he figures he can start moving his way up the ladder by sending Gamora to the sweet Hereafter. However, since all of this is transpiring on Xandar, the Nova Corps arrest the whole lot of them and send them off to prison.

Gamora reveals that she intends to betray Ronan and keep the Orb from him permanent-like as the Orb conceals one of the Infinity Gems, an artifact of immeasurable power that can level planets and wipe out civilizations. Quill, normally the most mercenary of men, grows a conscience but figures that the five of them can escape from this inescapable prison, avoid Ronan and is henchmen Nebula (Gillan) who is also one of Thanos’ adopted “daughters,” and Korath (Hounsou) a fearsome fighter. If they can keep from killing each other while they’re doing it, so much the better.

James Gunn is an inspired choice to helm this film; as previous movies on his resume like Slither and Super showed, he has a quirky sense of humor and a stylish visual sense. One of the things he utilizes to full effect is a group of songs from the 60s and 70s that Peter has collected on the Awesome Mixtape Vol. 1 which his mother gave him prior to her death and is his sole link with his life on Earth. The tape (which is available for download or on CD) has some amazing songs that have a certain cheese factor but are actually all pretty damn catchy, ranging from “Hooked on a Feeling” by Blue Swede and  “Come and Get Your Love” by Redbone to “Ain’t No Mountain High Enough” by Marvin Gaye and “Spirit in the Sky” by Norman Greenbaum (the latter two both classics for different reasons). It’s one of the most engaging soundtracks in recent years.

This is a galaxy that may be far, far away but there’s an awful lot that’s familiar about it too. Part of the reason for that is that Gunn takes the time to develop all of his characters. It isn’t just Quill and Gamora, the two leads, who are given personalities, but all five of the Guardians and to a certain extent, some of the villains as well – Yondu, Ronan and The Collector (del Toro) all become defined, fleshed-out characters that everyone in the audience will root for – or against as the case may be.

Pratt, who has mostly been known for supporting roles but made some career headway in Parks and Recreation, establishes himself as a lead movie star here. He’s funny, but also handles his action sequences with aplomb and when the time comes for him to be heroic, handles that aspect nicely. He has a great deal of screen presence and seems comfortable being the film’s center. While Saldana’s chemistry with Pratt isn’t as incendiary as I would have liked, the rest of the crew all come off pretty well.

The characters of Rocket and Groot are just as real as the flesh and blood actors is; there is a moment near the very end of the film when Rocket lets down his guard and we see his pain in a very real way. It is one of the most moving moments of the film alongside of young Peter mourning his mother. I think it isn’t unfair to say that the two CGI characters very nearly steal the film. One of the moments I loved most in the movie is Groot getting absolutely medieval on a bunch of Ronan’s thugs, beating the holy crap out of them to the point of overkill, then turning to Peter – a.k.a. Star-Lord by the way – and giving him a sheepish grin that had the whole theater in stitches.

I don’t often give perfect scores to summer movies but this is one that is getting one. This is as entertaining a movie as I’ve seen in years. I’m not big on going to see a movie more than once in theaters – there are only a very few that I’ve done that with – but as I write this, I’m getting ready to head down to the IMAX 3D theater at Pointe Orlando to see it a second time, this time in 3D IMAX. So you still want to know what makes a great summer movie? Just watch this.

REASONS TO GO: Great balance between humor and action. Spectacular visuals. Career-making performance by Pratt. Rocket and Groot work so much better than I expected.

FAMILY VALUES:  Sci-fi action and violence and a little bit of harsh language.

TRIVIAL PURSUIT: Diesel recorded all of his dialogue in a number of languages including Spanish, Mandarin and French so that the same voice can be heard in every version.