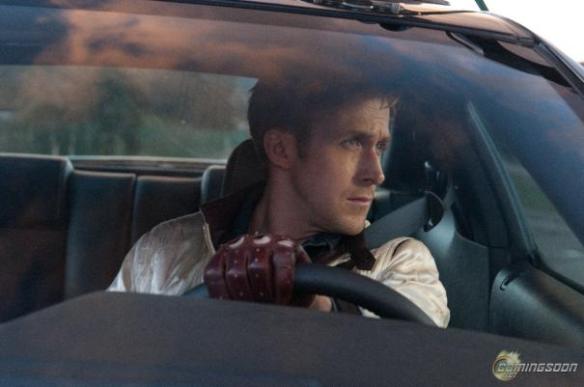 The Driver (Gosling) – who is never given a name throughout the movie – does just that. He acts as a getaway car driver for criminals by night, and as a part-time Hollywood stunt driver by day. His agent is Shannon (Cranston) who did what the Driver did once until his knees were shattered. Shannon owns a garage that the Driver works as a mechanic for when he’s not driving. He’s quite good with repair, but he seems like a fish out of water when he’s not behind the wheel.

His neighbor Irene (Mulligan) is raising a small boy (Leos) by herself – her husband Standard (Isaac) is in prison but wants to go straight. The Driver takes a liking to Irene and Benicio (the boy). He is not an emotional sort but something about the boy’s unconditional acceptance and the woman’s quiet sweetness touches him. He begins to spend more time with them.

Shannon has a dream of owning a stock car racing team. He needs some cash to do it, so he visits mobster Bernie Rose (Brooks) who watches Driver behind the wheel and knows that this kid can be a racing superstar. Bernie’s partner Nino (Perlman) is skeptical; he’s a brutal and nasty customer who is as greedy and savage as Bernie is clever and murderous. Still, it looks like a pretty straight deal.

However, Standard gets out of jail and returns home. He wants to go clean but he owes some protection money from jail. He needs money fast – and Cook (Biberi), the man he owes money to, is willing to wipe the slate clean in exchange for Standard robbing a pawn shop. Standard really doesn’t want to do it but he’s backed into a corner and agrees to do it. Driver, smelling a rat, insists on being Standard’s driver. Cook wants his girlfriend Blanche (Hendricks) along for the ride.

When things go south – waaaaay south – Irene and Benicio are placed in harm’s way and it looks like the only one who can get them out of there is the Driver. However, with all the forces arrayed against him, even someone as skilled as he might not be able to drive them out of the way fast enough.

Refn is a talented Dutch director who was hand-picked for this movie by star Gosling. He’s done things like Valhalla Rises, the Pusher trilogy and Bronson. This is his American movie debut and he acquits himself well. This is very much like Bullitt if it had been directed by Michael Mann in 1986. There’s definitely an ’80s noir look to it, with lots of neon and an 80s-esque soundtrack. This could well have been the lost episode of “Miami Vice.”

Gosling has been compared to Steve McQueen and in many ways that’s a very apt comparison. Gosling is very much the strong silent type, and this role fits him like a glove. In some ways it reminds me of Eastwood’s Man With No Name – a man who follows his own moral compass without minding much that it isn’t necessarily what society believes in. Gosling’s Driver views the world much as an alien does – without complete understanding or buy-in. He cocks his head oddly, as if viewing the world  like someone observing it for the first time.

Brooks is a revelation. Known more for his comedic work, he is surprisingly menacing and dangerous as the mobster. He is disarming and charming, sure but at the core this is a ruthless, amoral killer who would as soon knife you as he would shake your hand and he’s not above doing the dirty work himself.

Perlman is one of my favorite actors and here we see him in a role we don’t see him in often – the psychotic villain. He snarls and is kind of a Jewish goombah. Sort of like Tony Soprano with a yarmulke. Perlman actually sustained some serious injuries, shattering a knee during his final scenes in the movie. That’s dedication.

Mulligan, so good in An Education, plays against type here as the mousy wife. There is definitely an undercurrent of smolder between Irene and Driver, but never anything more than that. Mulligan doesn’t pull off the young wife as well as she pulled off the teenager; that doesn’t mean she doesn’t do a good job, it’s just a good job though.

The action sequences are well done. As you’d expect in a movie like this, the car chases are nicely done. The first one is a bit of a change of pace – it’s less muscle cars roaring through the streets a la The Fast and the Furious so much as a very smart man playing cat and mouse with the cops. It’s more hide and seek than grand prix.

This is definitely more of  a thinking person’s movie rather than the visceral action movie junkie’s film. There’s plenty of gore – Refn is known for his intense bloody style – so those who have issues with it to give this movie a miss in the theater. However, it is so intelligent that you might go ahead and see it anyway. It’s a different kind of movie and with Gosling leading the way, it’s good entertainment as well. If I were you, I’d drive right down and see it straightaway.

REASONS TO STAY: Not enough action sequences; could have used one more car chase. Gore might be off-putting to some.

FAMILY VALUES: There is a good deal of violence and blood. There are also some breasts here and there.

TRIVIAL PURSUIT: The part of Irene was originally meant to be Hispanic but when the producers were able to cast Carey Mulligan in the role, some minor changes were made to make her Caucasian.

HOME OR THEATER: There is some sense in seeing this in the theater, particularly for the driving sequences.